Please ensure Javascript is enabled for purposes of website accessibility
Log In Help Join The Motley Fool
Free Article Join Over 1 Million Premium Members And Get More In-Depth Stock Guidance and Research
By Travis Hoium - Jul 8, 2016 at 9:30AM

Gaming revenue is down again in Macau, but there may be good signs for the industry.

You know Macau has gotten bad when a monthly gaming revenue figure is so low you have to go back to 2010 to see a comparable number that actually beats expectations. But that was the case in June, when Macau's gaming revenue dropped 8.5% from a year earlier to $2 billion.

The drop continues more than two years of gaming declines in the region, but analysts are starting to see green shoots. And for gaming companies Melco Crown (MLCO -2.61%), MGM Resorts (MGM -2.99%), Wynn Resorts (WYNN -3.52%), and Las Vegas Sands (LVS -3.78%), any good news they can get is welcome given the pending increase in supply.

Mass market players are coming back

There are two distinct markets in Macau -- the VIP market filled with high rollers and the mass market. Casinos typically cater to VIPs with complimentary benefits and have junkets bring players in and borrow them money for gambling. It's this VIP market that has declined the most since 2014, and in June, it continued to struggle. 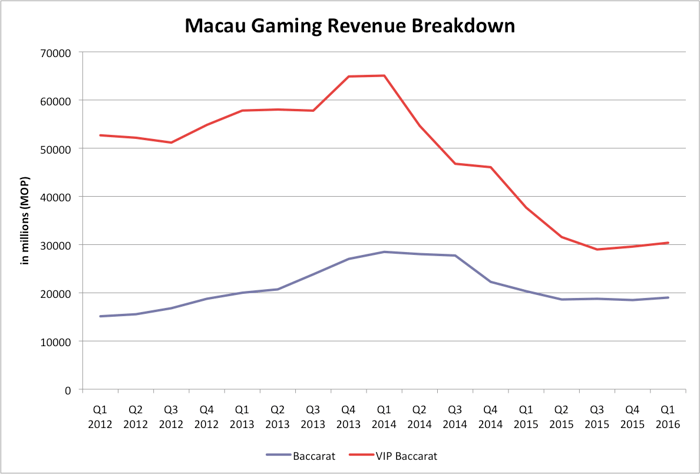 But you can see that mass market play has stabilized more quickly and fallen less than VIP play. And it's the mass market where analysts are starting to see modest growth, which should help gaming companies long term.

Why the mass market matters

When Macau was in massive growth mode, it was VIPs who led the charge. They accounted for 70% of the gaming market, and Wynn Resorts, Melco Crown, Las Vegas Sands, and MGM Resorts would fight over players and the best junkets, to whom they would give their own private rooms.

VIPs bring a lot of revenue, but they also come with costs, like paying junkets and for hotel rooms and other comps. Las Vegas Sands has said in the past that four times as much EBITDA is generated per mass-market dollar gambled compared to the VIP market. All else equal, casinos will benefit more from having more mass-market play than VIP play.

Tourists need to come back to Macau

Despite a new low in gaming revenue that we have seen since 2010, there are some good signs in Macau's gaming market. Revenue appears to have stabilized, and if the mass market grows, it could be a boon for gaming companies. The rest of 2016 will tell if the green shoots were wishful thinking, or a real sign that better days are ahead.