The tobacco giant could be vulnerable to anti-smoking activists launching a wave of litigation against it. 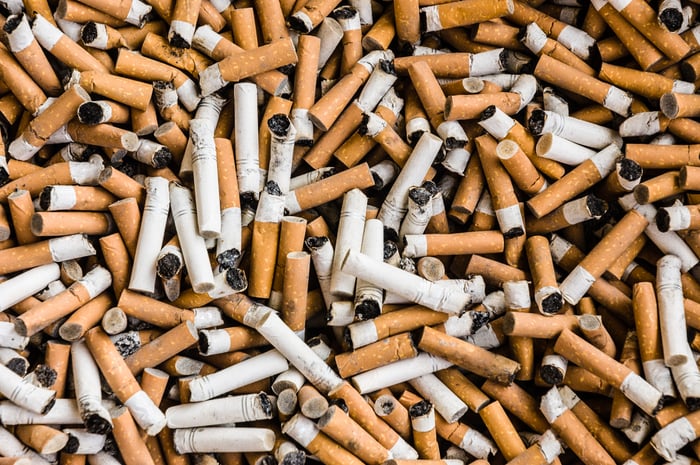 The European Union's decision not to renew an anti-smuggling agreement with Philip Morris International that previously protected it from lawsuits could launch a wave of litigation against it. Image source: Getty Images.

The litigation risk of Philip Morris International (PM 2.80%) just rose exponentially as its decade-old agreement with the European Union to combat cigarette smuggling expires and the commission has opted to not extend it. With its cloak of legal protection now removed, investors ought to expect anti-smoking activists to launch lawsuits against the tobacco company for its alleged role in the illicit cigarette trade.

It's been argued that as government taxation of tobacco products approached usurious levels, the tobacco companies sought to minimize the duties they had to pay by conspiring with smugglers who were often connected to organized crime to trade cigarettes on the black market.

Investigations purported to show that executives of Philip Morris, Reynolds-American (RAI), British American Tobacco (BTI 1.53%), and others were well aware of the nefarious connections their shady partners had, and with lawsuits piling up against them, they entered into an agreement with the EU to be shielded from liability for smuggling in exchange for making annual payments to the European Commission (EC) that would go to programs to combat cigarette smuggling.

The deal was signed on July 9, 2004 and would run for a period of 12 years. Similar agreements were subsequently signed with British American Tobacco, Imperial Tobacco (IMBB.Y 0.49%), and Japan Tobacco (JAPAF 2.88%), but lawsuits against Reynolds' R.J. Reynolds division are still going on.

Philip Morris says the agreements are effective and noted that seizure of its own branded cigarettes has declined by 85% since 2006.

According to an annual survey conducted by accounting giant KPMG for the EC at the behest of the tobacco companies, illegal cigarettes accounted for 9.8% of all cigarettes consumed in the European Union in 2015, or 53 billion cigarettes, representing a loss in tax revenues of 11.3 billion euros. Yet most of the illegal cigarettes, or 88%, come from markets outside of the EU, with Belarus being the biggest source of the illicit trade. That, says the tobacco industry, highlights the effectiveness of the agreement it has had with the member states.

Philip Morris noted, "With or without (the agreement's) renewal, PMI's priority remains the measures contained within it. PMI's ongoing commitment to continued efforts and investments around the world to tackle illicit trade remains intact and stronger than ever."

Anti-smoking activists would beg to differ, saying the tobacco companies have gotten off cheap, paying almost $2 billion over the life span of the agreements, thus insulating themselves from lawsuits, which, if successful, would undoubtedly be a much larger cost.

The activists are calling for immediate investigations of the tobacco companies following the expiration of their respective agreements. Because Philip Morris' agreement is the first to expire, it is the one that will have the anti-smoking lobby's guns trained on it.

While the member states of the EU were reportedly in favor of extending the agreements, no doubt enjoying the cash that flowed into their coffers from the tobacco companies, the commission said it was no longer necessary as strict new laws enacted this year that require tracing of tobacco sales while banning certain types of cigarettes made the agreements obsolete.

The industry had also angered the commission by suing to prevent the new laws from taking effect. Now Philip Morris, as the biggest and most visible symbol of that opposition, and no longer possessing its cloak of legal protection, could very soon see a wave of lawsuits wash over it.