There aren't many dividend stocks yielding more than 6% that are worth your investment dollars. Terra Nitrogen Partners, Holly Energy Partners, and Royal Dutch Shell are three of the few that are.

Finding dividend stocks that yield more than 6% typically means that you are trolling the trading floor for less than stellar companies or those that are under a lot of financial stress that puts its payout in serious jeopardy. That isn't exactly a formula for anyone that wants to grow their wealth over time or get a decent nights sleep. Fortunately, there are companies with yields north of 6% that are actually worth buying and holding. Three in particular that seem to stand out are Terra Nitrogen Partners (NYSE: TNH), Holly Energy Partners (HEP -1.81%) and Royal Dutch Shell (RDS.A) (RDS.B).

Here's a quick look at why Terra Nitrogen, Holly Energy Partners, and Shell -- with dividend yields of and 8.7%, 6.6% 6.7%, respectively -- are worth considering today.

Terra Nitrogen Partners isn't for every dividend investor because it is a variable rate dividend rather than the fixed rate that we are so used to in the US. Terra Nitrogen has a variable rate payout because it has only one cash generating asset, a nitrogen fertilizer plant in Verdigris, Oklahoma that generates commodity products such as ammonia as well as higher margin products such as urea ammonium nitrate. By keeping a variable rate payout to shareholders, it prevents the company from having to payout more cash than what is coming in the door.

That is possibly the biggest negative when it comes to the company, but the positives help to make up for that shortcoming. As a nitrogen fertilizer producer that uses natural gas as its base feedstock instead of coal or petroleum coke (an oil refinery byproduct) like so many other companies producing nitrogen, it has an immense feedstock cost advantage that puts it near the bottom of the cost curve. So even though the price for fertilizers have gone down quite a bit in recent years, the company has remained solidly profitable.

It also helps that Terra Nitrogen is completely debt free, an absolute rarity among master limited partnerships. Having a lower debt burden has helped the company produce spectacular returns on equity over the past 10 years. Even after its recent slide in profitability, Terra Nitrogen is still producing returns on equity of greater than 75%. So maybe the dividend payment isn't consistent, but it has remained well above 6% for most of the past decade and has generated incredible total returns over that time. 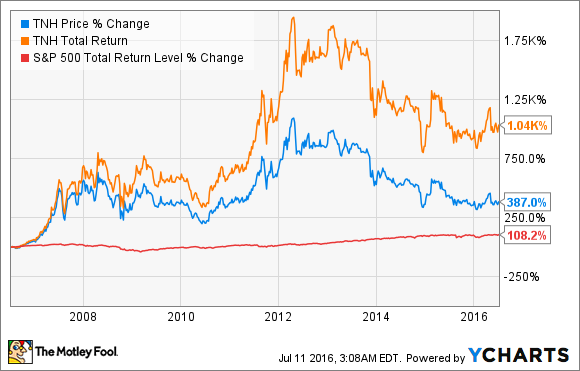 Slow & steady has won the race so far

Holly Energy Partners is another one of those companies that tends to fly under many investors' radars. It doesn't do a lot of flashy acquisitions or promise these massive growth forecasts that so many other partnerships have over the past few years. Instead, the company has kept its head down and done the things that really matter when it comes to creating value: grow modestly but consistently, keep a strong balance sheet and investment grade credit rating, and don't stretch cash flow statements with an overly generous payout to shareholders. Those three things have allowed Holly Energy Partners to raise its payout every quarter for 46 quarters (11 and a half years!) straight. That kind of consistency is what has allowed the company to steadily outpace the S&P 500 on a total return basis 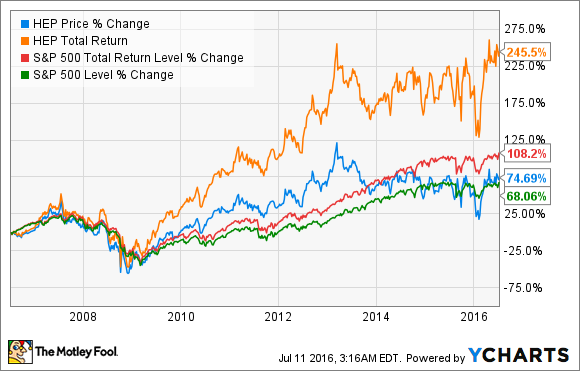 If you are looking for a company that will rebound strong as oil and gas prices increase again, this isn't the company you're looking for. Holly Energy Partner's revenue is 100% fee based and more than 80% of its contracts with its customers for pipeline or tank storage carry a minimum volume. So there isn't a whole lot of upside for rising oil prices. Instead, Holly Energy Partners will keep doing those three things above. As long as it stays on that track, it's not too much of a stretch to see the company keeping its payout streak alive for a long time.

A healthy portion of yield with a side of risk

Of the three companies here, Royal Dutch Shell may be one company here with the most questions to answer. Even though Shell is more than 100 years old and is one of the stalwarts in the industry, it surprisingly doesn't have the best reputation as a company that generates long term value for investors. The company's penchant to invest in higher risk, higher reward development projects like its recently abandoned Arctic oil project have not always led to high returns on capital invested. As a result, the company's stock hasn't even kept pace with the S&P 500 on a total return basis over the past 10 years. 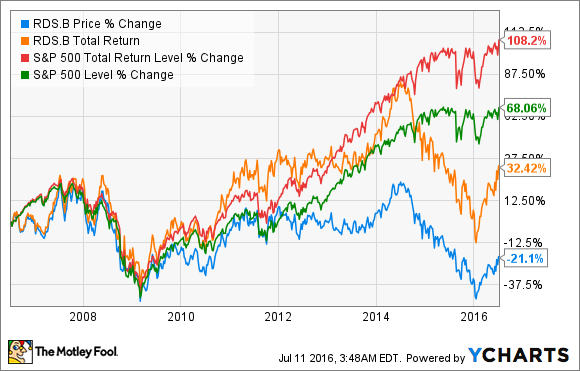 Despite this less than stellar record, Royal Dutch Shell's management has realized the faults of its past and is looking to reconfigure itself as a more profitable company for the future. CEO Ben van Beurden has said on multiple occasions that is is focusing more on profitability rather than production growth. Also, the company is making a major transformation after making a $50 billion plus acquisition of BG Group and now shedding a bunch of assets that are less profitable or don't benefit from the two companies joining forces. The idea is to preserve the company's current dividend and buy back gobs of stock once the company's cash flow situation is figured out.

It's one thing to say these things, but now Shell needs to execute on them. If it can do that, then today's 6.7% dividend yield and its price to tangible book value of 1.1 times looks pretty appealing, just know that there are still some aspects of Shell's investment thesis that are still up the air that could make even today's cheap stock price seem unappealing.

Tyler Crowe owns shares of Terra Nitrogen. You can follow him at Fool.com or on Twitter @TylerCroweFool.