Changing tastes of drinkers may be driving a thirst for imports. 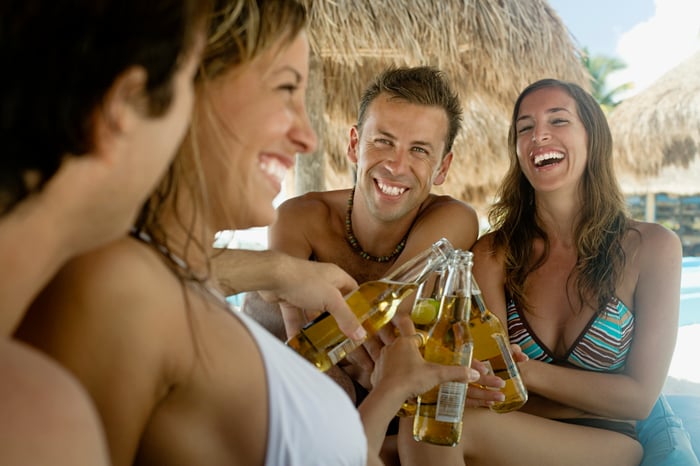 Imports may become the new king of beers. While the industry as a whole is on track to decline for the third time in four years, imported beer is showing the kind of strength that was once reserved for craft beers. While that segment's death has been greatly exaggerated, imported beer is now outselling craft over the first six months of 2016 and may be the new big beer trend.

According to the analysts at market research firm IRI, import beer grew 6.7% in the first two quarters of the year, surpassing the 6% increase achieved by craft brews. While that's down slightly from the 8.7% jump imports saw in the same period a year ago, it puts the category firmly ahead of craft beer, which had surged 17% in 2015.

It's clear beer of all kinds are struggling to maintain their momentum against the rise of new trends and flavors, but the imported market may take up the slack caused by craft beers' decline.

Constellation acquired the rights to distribute Modelo brands in the U.S. in 2013, when Anheuser-Busch InBev (BUD 0.37%) bought the Mexican brewer but faced challenges with antitrust concerns at the Justice Department. As a result, it offered to sell to Constellation for $2.9 billion; the perpetual rights to Corona and other Grupo Modelo brands in the U.S., Modelo's Piedras Negras brewery in Mexico, and its 50% stake in the Crown Imports joint venture that Constellation didn't already own.

In its earnings report, Constellation said net beer sales rose 19% for the quarter as the contribution from the Ballast Point Brewing craft beer it bought for $1 billion last year boosted the segment. But it also enjoyed 10% growth in organic net sales, on a constant currency basis, as each brand in its Mexican beer portfolio grew across most channels, and packages helped to lead volume gains among U.S. brewers.

Beyond just the Corona beers, which were actually held back because of a recall that led to some shortages, Constellation says the new 24-ounce can of Grupo Modelo's Pacifico brand is the No. 1 new import this year. Additionally Modelo Especial and Modelo Especial Chelada (its Bloody Mary-style concoction of tomato, salt, and lime in a 3.5% beer) both enjoyed double-digit growth.

Perhaps still the most interesting beer

Heineken (HEINY 0.49%) also reported 7% organic growth in the first quarter, which it said was positive across all regions. It has benefited in particular from its Dos Equis brand, which IRI notes saw the Dos Equis Lager Especial beer grow more than 10% in 2015 to $325.3 million. Between between 2007 and 2015, Heineken says Dos Equis case shipments jumped 35% and it is expecting one quarter of all its future growth to come from the brand.

Of course, some brewers still try to play up the imported roots of their brews knowing the attraction they hold for beer drinkers, even though they're actually made in the U.S. Anheuser-Busch was famously sued for "tricking" U.S. consumers into believing its Beck's brand was an import when it is actually brewed in St. Louis; Diageo's Jamaican-style Red Stripe is also brewed here; as is the supposed Australian beer Foster's, which is made by MillerCoors, the joint venture of SABMiller and Molson Coors.

But the changing taste profile of drinkers seems to be hitting regular beer and craft beer harder than imports, and though imports may not see the same sort of meteoric rise craft beer enjoyed, it could mean there is still enough room for there to be heady growth on tap.

Rich Duprey has no position in any stocks mentioned. The Motley Fool recommends Anheuser-Busch InBev NV and Diageo. We Fools may not all hold the same opinions, but we all believe that considering a diverse range of insights makes us better investors. The Motley Fool has a disclosure policy.