The uniform rental company has handily beaten the market over the past five years. But that doesn't mean its future success is guaranteed. Here's why. 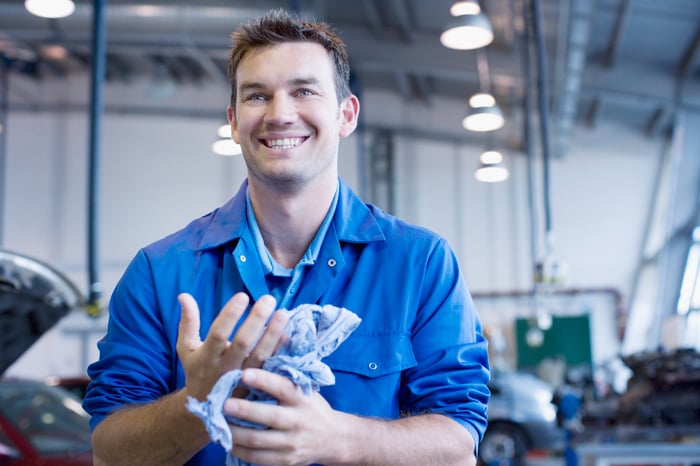 I wouldn't blame you if you'd never heard of Cintas (CTAS -0.06%), despite its status as a member of the S&P 500. The company's primary business is renting uniforms and floor mats to other businesses. Not exactly the most exciting (or visible) line of work.

The company's performance, on the other hand, has been anything but dull. Not only has it handily trounced the S&P over the past five years, but it's also beaten the performance of smaller rivals such as UniFirst (UNF 0.85%) and G&K Services (GK): 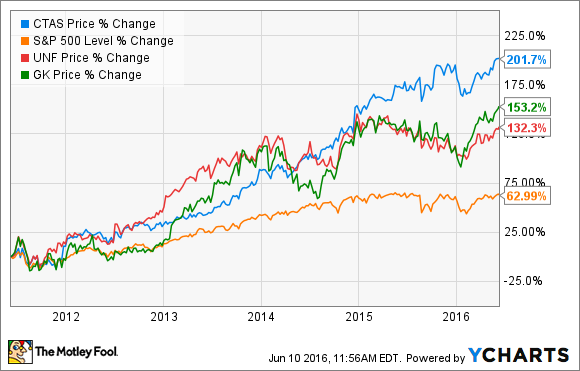 But that doesn't necessarily mean smooth sailing from here on out. Owning even a strong company like Cintas carries some risk. Here are three of the biggest risks to shareholders.

Generally speaking, as a company gets larger, its growth rate slows down, but Cintas has been bucking that trend with strong earnings and revenue growth in recent years. The company's compounded annual revenue growth since 2011 has been 4.5%, and its compound annual growth of net income has been an impressive 13.1% : 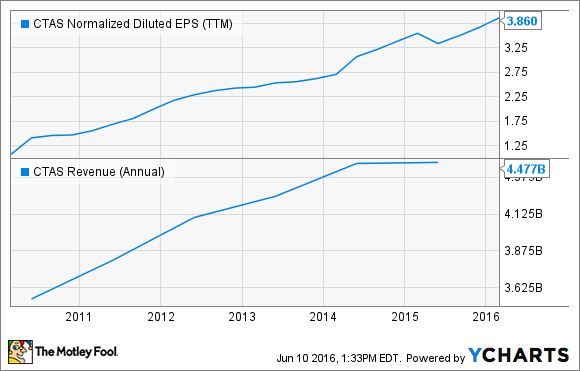 But rapid growth can't continue forever, especially when Cintas isn't the only company in this space. The North American uniform rental market is very fragmented, and there are lots of smaller players. Cintas controls about 25% of it overall. Rivals UniFirst and G&K Services control 9% and 6%, respectively, with the uniform division of Aramark (ARMK 1.09%) controlling an additional 10%. That leaves fully half of the market consisting of smaller local or regional players.

You might expect that these smaller companies would have an advantage over Cintas, at least in terms of growth. But since the Great Recession, Cintas' EPS growth (the blue line in the following chart) has outpaced its smaller industry peers: 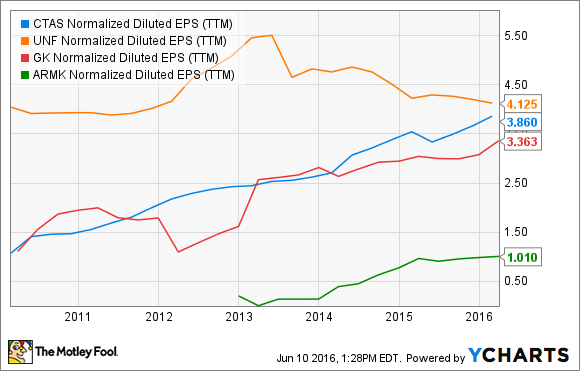 This strong growth profile may already be priced into the stock, given that its enterprise value to EBITDA ratio is the highest of its peer group. If that's true, and growth slows down, the stock price will take a hit. Which is definitely a risk for a company that has come so far, so fast.

To combat any potential slowing of growth, Cintas has been branching out into new business lines since 2002, when it introduced a restroom supply business. Document shredding and fire protection offerings soon followed in 2003.

These other business lines make up a very small piece of Cintas' revenue pie. The core uniform/floor mat rental business still contributes 77% of the company's revenue, with another 10% coming from uniform sales. Only the remaining 13% or so comes from these new ventures, which include first aid kits.

But expanding into new lines of business -- even on a limited basis -- is risky. Cintas found this out firsthand when divested its document shredding business last year after it failed to meet its growth expectations.  For now, the remaining new ventures are highly profitable, sporting a 44.1% profit margin overall. But that's no guarantee of continued success. They, too, could fail to grow as anticipated, or face new competition, leaving the company headed for slower growth and tougher times.

It stands to reason, of course, that periods of high unemployment -- recessions, for example -- would be particularly tough on a company like Cintas. After all, fewer employees need fewer uniforms. And sure enough, Cintas' share price is affected by recessions.

But this could become a further problem for Cintas -- indeed, for any uniform renter -- if automation technology begins to replace human workers in traditionally uniformed professions. For example, if a delivery truck becomes automated, or replaced by a drone, there won't be any need to rent a uniform for the driver. Receptionists, cashiers, warehouse employees: Anyone whose job becomes automated is one less employee needing a uniform... and one less customer for Cintas.

Of course, that's a long-term problem (although some believe it's coming sooner rather than later), so it's unlikely to affect the company's fortunes in the short term. But if automation seriously begins eating into its profits, or if other technological or economic factors start to have a major impact on overall employment, you can expect Cintas' performance to suffer.

Cintas is a strong company, but it isn't immune to risks. A changing labor market, untested new ventures, and slowing growth could have an impact on the company's fortunes, and the fortunes of its shareholders. For now, Cintas seems to be avoiding these potential pitfalls and cruising to continued success. But there are a few things investors should keep an eye on to gauge whether Cintas is vulnerable to these risks.

The easiest to track is the unemployment rate, which has been dropping steadily over the past several years.  If it reverses course, instead ticking upwards over multiple quarters in succession, that would be a red flag for Cintas. Investors should also watch the profit margins of the company's non-core business lines, as weakness there will have an impact on the bottom line. Finally, check in on the company's core revenue and earnings growth every quarter for signs of a prolonged slowdown, which might indicate that the company's days of rapid growth are nearing an end.

John Bromels owns shares of Cintas. The Motley Fool recommends Cintas. We Fools may not all hold the same opinions, but we all believe that considering a diverse range of insights makes us better investors. The Motley Fool has a disclosure policy.