As a Snapchat IPO starts to make more sense in the coming 12 months, the vanishing-video platform faces a similar risk as larger rival Facebook.

Snapchat's ascent into the upper echelon of social media has been fueled primarily by its incredible popularity among younger users. Now, as older people are moving to the platform in bigger numbers, the kids are complaining. But Snapchat probably isn't. With the company increasingly focusing on revenue growth en route to an upcoming IPO, it needs to grow its audience and adults are a promising way to do that.

As a new report from researcher comScore confirms, "Snapchat isn't just for teens and college-age adults anymore," a claim the company backs up with compelling amounts of cold, hard data.

Case in point, Snapchat's usage among both millennials aged 25-34 and those 35 or older in the U.S. has soared in recent years. Three years ago, only 5% of those between the ages 25 and 34, and 2% of those 35 or older, used Snapchat. Fast-forward to today, and those number have grown to 38% and 14%, respectively. See for yourself: 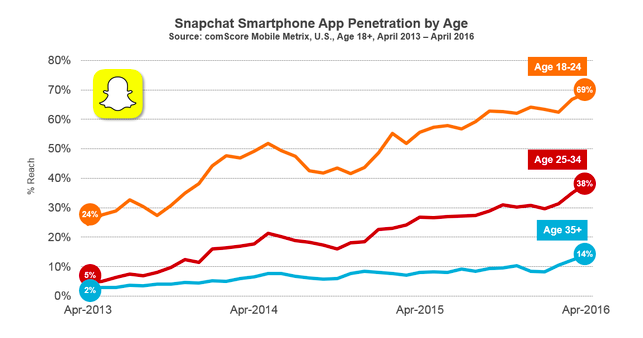 To be sure, Snapchat's popularity among its largest constituency -- those between the ages of 18 and 24, which some deem part of Generation Z -- is at its all-time high, 69%. Therefore, the risk of a mass exodus to the next, shiny social media product seems unlikely. However, a few recent reports suggest that younger users aren't thrilled to see their parents increasingly appear on their vanishing-video app.

In a recent article, The Wall Street Journal chronicled the tensions some younger Snapchat users have expressed as their parents flock to the next major social media platform.

The loss of any age-related "cool factor" mirrors the history of the world's largest social network: Facebook (META -2.36%). Per the WSJ report, Facebook co-founder and CEO Mark Zuckerberg commented in 2013, a time when older generations were similarly flocking to this service, that "coolness is done for us." Though that hasn't turned out to be a problem for Facebook.

Like Snapchat, Facebook started as a phenomenon on U.S. college campuses. Today, Facebook sees roughly 1.65 billion monthly active users (MAUs) and 1.09 billion daily active users (DAUs). Embracing older demographics was certainly a necessary step in Facebook's evolution into one of the world's largest and most prosperous tech companies. The company saw earnings per share increase 17% last year on $3.7 billion in net income, and Facebook's per-share profits are expected to again rise an impressive 99% this year. In order for Snapchat to build a similarly profitable franchise, it will need to embrace older users, much like Facebook has.

A great problem to have

To be sure, Snapchat's problem here is certainly of the "embarrassment of riches" sort. Moreover, if it plans to reach, and eventually exceed, its purported fiscal target of between $500 million and $1 billion in revenue next year, Snapchat will need older users to help drive continued user growth both domestically and internationally. Remember that like rivals Facebook and Twitter, Snapchat's revenue model is largely based on serving advertisements to its users. To continue to succeed, Snapchat must increasingly cater to new users types and age groups.

Moreover, Snapchat's lofty $20 billion valuation makes catering to a more mainstream cohort of users all the more necessary. This shift was going to happen whether Snapchat's younger users liked it or not.

If it fails to do so, which seems rather unlikely at present, Snapchat could face a fate like the now-cautionary tale that is Twitter. For wholly unrelated reasons, Twitter's user base growth has stagnated in recent quarters, which has led to a roughly 58% decline from its IPO price at the time of writing.

While Snapchat's evolution into perhaps the most important new media platform since Facebook will assuredly create its fair share of growing pains, these kinds of changes are wholly inevitable and should be viewed as a sign of maturity by tech investors everywhere.