"I believe non-dividend stocks aren't much more than baseball cards. They are worth what you can convince someone to pay for it." -- Mark Cuban

Shark Tank star Mark Cuban knows a thing or two about investing. One thing he learned is the importance of investing in companies that pay their investors some of the profits. This practice not only instills discipline at the company but ensures that shareholders get a tangible return on their investment. In other words, investing in a dividend paying stock is investing in not just in the hope of a higher payday, but it is buying into an income stream that ideally will rise over the long-term. Here are three stocks that would pass the Mark Cuban test.

Pebblebrook Hotel Trust (NYSE:PEB) owns a suite of 35 high-end hotels in 14 major U.S. markets. The company leases these luxury properties to 15 different operators, which pay rent. The bulk of that income gets distributed back to investors each quarter via the company's lucrative dividend that yields 5.7% at the moment.

Pebblebrook has cut its investors a check every quarter since it went public in 2011, with the amount written on those checks rising nearly every year: 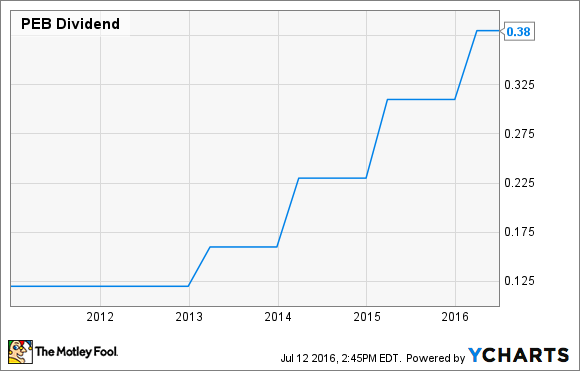 The hotel owner is poised to continue to send its investors an increasing amount of cash thanks to the embedded growth of its hotel portfolio. Part of its investment strategy is to buy good hotels at below market prices and make them even better through major renovations. To date, the company invested $142 million in major renovations and redevelopments, which already boosted its underlying earnings from $53.7 million to $112.5 million. The company has another $95.5 million of upcoming redevelopments, which it believes will drive an incremental $10.5 million of annual earnings. These investments, as well as additional hotel acquisitions, have the potential to keep the company's dividend checks heading higher.

Pipeline a steady stream of income

Natural gas pipeline giant Spectra Energy (NYSE:SE) also pays its investors pretty well. Not only do investors buying today get to lock in a current yield of 4.43%, but they can expect their paychecks to head higher over the next few years. Driving the company's ability to pay its investors a growing income stream are three things:

This combination of stability, discipline, and reliability yields a growing stream of income heading to its investors each quarter. Not only has the company grown its payout for years, but Spectra Energy expects to increase it by $0.14 per share through 2018 thanks to the strong slate of high-return growth projects it has under construction.

Shipping a boatload of money each quarter

Containership lessor Seaspan Corporation (NYSE:ATCO) pays the highest current yield of the group at 10.4%. It is an eye-popping yield to say that least, with yields that high a cause for concern typically. However, in Seaspan Corporation's case, its yield is anchored by long-term contracts that have an average remaining length of five years. As of the end of the first quarter, the company had $5.7 billion of future revenue locked in by these contracts. Though, there is a potential issue with at least one of these leases due to the current downturn in the shipping sector.

Even with that concern, Seaspan Corporation has a lot of wiggle room to maintain its current dividend rate. Last quarter, for example, it generated $100.5 million in cash that was available for dividends. However, it only paid out $48.7 million to investors. This cushion should enable the company to keep the dividend stable during the downturn while providing room to grow it when conditions improve. That said, investors should brace themselves for some choppy seas in the meantime with Seaspan Corporation being a higher risk/higher reward investment.

One thing all three companies have in common is that each owns physical assets leased to customers under long-term contracts. These asset-backed contracts provide a steady stream of income, which enables them to write big checks to investors each quarter.