Brian Feroldi, Keith Speights, and Cory Renauer
(TMFTypeoh)
Author Bio
Brian Feroldi has been covering the healthcare and technology industries for The Motley Fool since 2015. Brian's investing strategy is to buy high-quality companies and then let compounding work its magic. See all of his articles here. Follow @brianferoldi
Follow @brianferoldi 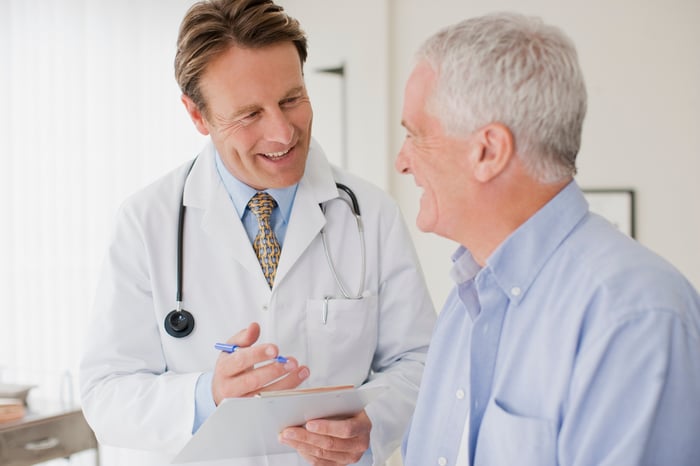 Roughly 10,000 baby boomers turned 65 today. The same thing is expected to happen tomorrow. And the next day. And the day after that. And every day thereafter for the next 13 years.

That's an amazing fact, and it should prove to be a huge tailwind for the healthcare sector.

With that in mind, we asked a team of our Motley Fool healthcare contributors to share a stock that they think is well positioned well to benefit from the trend. Read on to see what stocks they highlighted.

Brian Feroldi: One company that I think is positioned quite well to take advantage of the gradual graying of America is CVS Health (NYSE:CVS), the nation's largest retail pharmacy chain.

The thesis behind owning this stock is quite simple -- as the country grows older, the demand for healthcare goes up. That plays right into CVS Health's strengths, so I think the company looks poised for decades of profitable growth ahead.

But there's more to CVS Health's long-term growth story than just simple demographics. The company is rapidly rolling out its MinuteClinic concept across its retail footprint, which should bring incremental traffic into the stores. These MinuteClinics provide patients with quick and cheap access to basic medical-care services, so it's easy to understand why they're a hit with consumers. The company currently has about 1,100 of these clinics up and running, yet that's a small number compared with its store base of over 9,600 retail locations. There's plenty of room left for this concept to continue expanding.

CVS Health is innovating in other ways in an effort to make its stores more convenient for customers. The company has rolled out a smartphone app that allows patients to place refill orders on the go, and they receive a text message when the order's ready. It even offers curbside pickup at some of its locations, so customers don't even have to leave their car.

I'm convinced that becoming a leader in convenience will help to keep its millions of customers quite loyal. Add in the additional demand from the aging population, and I think CVS Health has a bright future ahead.

The main reason for pharmacy benefits managers (PBMs) to exist is to control the costs of prescription drugs. They accomplish this goal in several ways. One is to negotiate lower prices with drug manufacturers and distributors. Another is to encourage patients to use the most cost-effective medications. Like any PBM, Express Scripts does both of these. The company's status as the largest PBM, though, gives it an advantage over smaller rivals (such as CVS Health, which has its own PBM business).

Express Scripts uses its size as leverage in negotiating drug prices. It uses the vast amount of data collected to analyze ways to encourage use of lower-cost generic drugs. The company's economies of scale help it keep operating costs lower as well. All of this allows Express Scripts to be very competitive in landing new customers and hanging on to existing ones.

Of course, some customers are more demanding than others. Express Scripts' second largest customer, Anthem, wants the PBM to return around $3 billion in cost savings. The two companies are in litigation over the dispute.Does the possibility of a major customer departure make Express Scripts a stock to avoid? I don't think so.

After the Anthem dispute first went public earlier this year, Express Scripts shares plunged over 20%. The stock has clawed its way back up and regained roughly half of that drop. My view is that the stock still trades at a discount, with a forward earnings multiple below 12.

Cory Renauer: I agree fully with Keith's view that prescription drug volume will increase as baby boomers age. I think this makes an excellent argument for an overlooked section of the healthcare sector: wholesaler distributors.

You'll be hard pressed to find a U.S. drugmaker that hasn't disclosed (because it's the law) that AmerisourceBergen Corporation, McKesson Corporation, and Cardinal Health, Inc. (NYSE:CAH) were each responsible for 10% or more of its total revenue in recent years. While I'd like to own all three, Cardinal Health stands tallest at present. In May, the company announced a 16% increase in its quarterly dividend to $0.45, or $1.80 annually for a yield of about 2.2% at recent prices. That's more than its peers are offering, and it's poised to grow for more reasons than one.

First, wholesale drug distribution is a numbers game, and if you can't move enormous amounts of drugs through uncountable channels, you're not going to play. Cardinal's size allows it to spend more at its sources and collect less from its customers than a smaller company would find possible. At about 2%, Cardinal's operating margin over the past four quarters is the widest of the big three.

While economies of scale should shield Cardinal Health from competition in the decades ahead, its near-term prospects for bottom-line growth are looking good. The company has been fairly acquisitive in recent years and finished March with $9.15 billion in goodwill and other intangible assets on its balance sheet. While these assets shouldn't amortize, or drop in value, they usually do following acquisitions.

These non-cash transactions are weighing down Cardinal's bottom line. During the nine months ended in March, net income rose 19% over the same period a year previous, to $1.10 billion. That's impressive for a such a big company, but excluding amortization and other acquisition-related costs, net income would have been $1.42 billion.

While I'd love to see Cardinal quit paying premiums for companies that it has to amortize later, it's good to know its top and bottom lines are growing by double digits. With the amount of drugs that need distributing heading into the stratosphere, I can hear this stock screaming "buy" all the way from its headquarters in Ohio.