If you believe the Internet of Things is a big opportunity, take a look at these two major suppliers of IoT components.

Silicon Valley-based Cypress Semiconductor (CY) and Vancouver, Canada-based Sierra Wireless (SWIR -0.45%) both compete in the Internet of Things (IoT) industry. Both companies are down significantly from a year ago, but with over 13 billion consumer devices expected to be connected to the internet by 2020, the growth prospects for the two companies are huge. Which one is a better bet for investors right now? 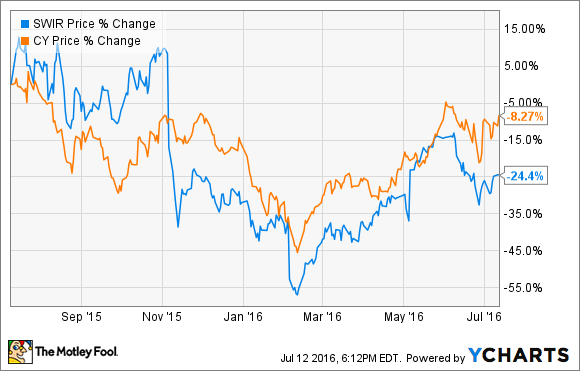 A large IoT supplier in transition

Cypress Semiconductor is in the process of reinventing itself. After its recent purchase of Broadcom's IoT business, Cypress Semiconductor has become one of the industry's largest wireless connectivity suppliers. The new IoT business combines with Cypress' existing microcontroller, power management, memory, and USB business, and also includes Broadcom's software development kit for engineers.

The Broadcom division did $189 million last year, is growing at a 17% annual rate, and was close to making a profit in 2015. It will be combined with Cypress' Data Comm division, which did only $20 million during the first quarter of the year on slim margins. The combination of the two units is expected to push Cypress' IoT supply business into solid profitability by next year.

In addition to the Broadcom purchase, the company also bought out rival microcontroller and memory maker Spansion in the spring of 2015 in a deal valued at $5 billion. The new combined company is expected to see annualized cost savings of $135 million and is expected to begin contributing to bottom-line profits this year.

Topping off the acquisition activity is an internal and external search for a new CEO. Company founder TJ Rogers announced in April that he was stepping down as the head of Cypress. Rogers will remain on the board of directors and will be retained to work on special projects. The position will be handled by an Office of the CEO headed by four current members of management until a selection is made.

The company has new projects in the works to help with future growth. IoT will keep moving forward with the new acquisitions already mentioned, with automotive connectivity and Bluetooth technology being a key focus. The company is also a leader in the new USB Type-C technology, a connection solution that combines traditional USB data transfer abilities with display data and power into one connector. Management sees sales flat year over year, with a rebound starting to take hold late this year or next year.

Sierra Wireless is a small designer and provider of embedded wireless 2G, 3G, and 4G components, cloud and connectivity services, and routers and gateways. Sales were down 5% in the first quarter of the year, but business is expected to turn a corner starting in the second quarter.

Sierra breaks its business down into three components: original equipment manufacturing (OEM), enterprise solutions, and cloud and connectivity services. The company's OEM division is its largest, accounting for 85% of sales in the last quarter. While sales in the big OEM and enterprise solutions units were down year over year in the first quarter, the company reported strong new client acquisition and stabilizing demand from existing clients.

The company is a major supplier of wireless parts for the automotive industry, and demand from that industry has been soft as of late. That softness has been offset by new customers in the mobile device, energy, and security industries. The company has also seen success in rolling out new components for municipal services like smart-metering and smart-parking, public safety, and transit.

While it represents only 5% of total revenue, Sierra's cloud and connectivity unit has nearly doubled in the last year. Sales primarily come from existing service contracts, but the division is working with the much larger OEM and enterprise units to integrate parts with cloud services to help acquire new sales contracts.

As the number of consumer IoT devices on the market continues to grow, the integrated cloud and connectivity service Sierra offers its hardware clients is of particular interest. As these devices hit the market, Sierra is setting itself up to have a recurring service-based revenue stream to complement its design and manufacturing operations.

I believe both companies have enormous opportunity operating in the emerging IoT industry, but I think Cypress Semiconductor is a better buy for investors right now.

Cypress Semiconductor is still in the midst of a transition with one recent and one new business acquisition to finalize, as well as a transition in leadership with longtime founder TJ Rogers recently stepping down. Profit has been hit from softening sales and charges related to the buyouts, but the bottom line is expected to return to positive next year. Over the next five years, analysts see profit growing at a 22% average annual rate. The PEG ratio, a measure of stock valuation to future profit growth, would indicate shares are currently a value, at 0.9.

Sierra, on the other hand, is expected to grow at an average 16% a year for the next five years. While still a solid bet for those looking to take advantage of the IoT movement, the company's past and expected future business growth is more of a slow-and-steady story. I am more interested in picking up some shares of Cypress at a discount while investor worry is ruling the day.

Nicholas Rossolillo has no position in any stocks mentioned. The Motley Fool owns shares of and recommends Sierra Wireless. The Motley Fool recommends Broadcom and Cypress Semiconductor. We Fools may not all hold the same opinions, but we all believe that considering a diverse range of insights makes us better investors. The Motley Fool has a disclosure policy.