Here's why this beaten-down biotech stock could come roaring back soon.

Novavax (NVAX 6.60%), a clinical-stage vaccine company, is currently trading well below its 52-week highs, and the biotech's shares have even under-performed the struggling iShares Nasdaq Biotechnology ETF over this time frame: 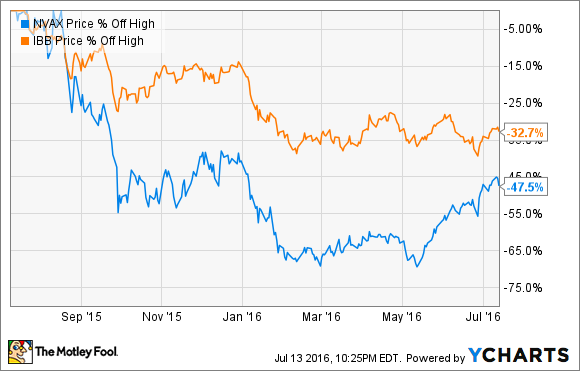 This beaten-down biotech stock, though, may be gearing up for a substantial rebound. Here's why.

Some time this quarter, Novavax is scheduled to release top-line data from its ongoing phase 3 trial known as Resolve assessing its RSV vaccine candidate in adults aged 60 or older. With a target market that's expected to hover around 77 million Americans by 2020 and vaccination rates forecast to exceed 60%, this experimental vaccine could easily generate megablockbuster sales figures.

Novavax is most likely going to initially price its RSV vaccine -- if approved -- around the $140 mark, presumably following Pfizer's highly successful commercialization strategy for its pneumoccocal disease vaccine Prevnar 13. So, without even accounting for potential price hikes, Novavax's RSV vaccine should post sales in excess of $6 billion at peak for just this first indication.

That's partly why the Street's average 12-month price target implies a staggering 91% upside potential for this stock, with some analysts raising the bar further still by forecasting a monstrous 236% rise in Novavax's shares over the next year. In short, Novavax does have the juice, so to speak, to revisit its former high -- and possibly blow past it.

Stocks with such jaw-dropping growth potential generally don't trade at deep discounts for no reason, and Novavax is no different in this regard. The primary risk factor is the middling p-value of the biotech's RSV vaccine in its phase 2 trial in older adults. Specifically, the company reported a p-value of 0.041 when comparing its vaccine vs. placebo among patients that exhibited any symptom of RSV, which implies less-than-ideal confidence in the results.

The good news is that this p-value should drop markedly (thereby raising confidence in the findings) in the forthcoming phase 3 readout, clearing the path for a regulatory filing in 2017. The reason is that the sample size in the ongoing phase 3 trial is approximately 7.5 times larger than the previous phase 2 trial, and a larger sample size usually means more statistically significant results.

For those unfamiliar with the mechanics of parametric statistics, the bottom line is that a larger sample size should (in theory) lead to a lower p-value, as long as there are no major deviations in the underlying characteristics of the target populations between studies. That's why Novavax has been touting the FDA's requirement that the Resolve trial population be statistically equivalent to the population targeted in the vaccine's prior Phase 2 trial.

The only possible black swan facing Novavax at the moment, in my view, is an unknown demon hiding in the woodwork -- that is, a latent factor that could cause the two study populations to deviate significantly from one another in one or more parameters. While that scenario is unlikely, stranger things have happened during the course of clinical trials, and no clinical-stage biotech (heck, no stock) is totally risk-free.

Having said that, I'm cautiously optimistic that Novavax's management is correct in their assessment that this RSV vaccine candidate is basically de-risked at this stage, potentially creating a huge valuation gap in the company's share price right now. And, that gap is set to be filled if these upcoming phase 3 results live up to the hype.

On a personal note, I'd be willing to add this stock to my portfolio if it wasn't already included in the holdings of the IBB ETF, which I already own. After all, Novavax should draw significant interest from Big Pharma in terms of a buyout offer if all goes as planned. Stay tuned.

George Budwell owns shares of iShares NASDAQ Biotechnology Index and Pfizer. The Motley Fool has no position in any of the stocks mentioned. We Fools may not all hold the same opinions, but we all believe that considering a diverse range of insights makes us better investors. The Motley Fool has a disclosure policy.