Please ensure Javascript is enabled for purposes of website accessibility
Log In Help Join The Motley Fool
Free Article Join Over 1 Million Premium Members And Get More In-Depth Stock Guidance and Research
By Cory Renauer – Jul 16, 2016 at 9:03AM 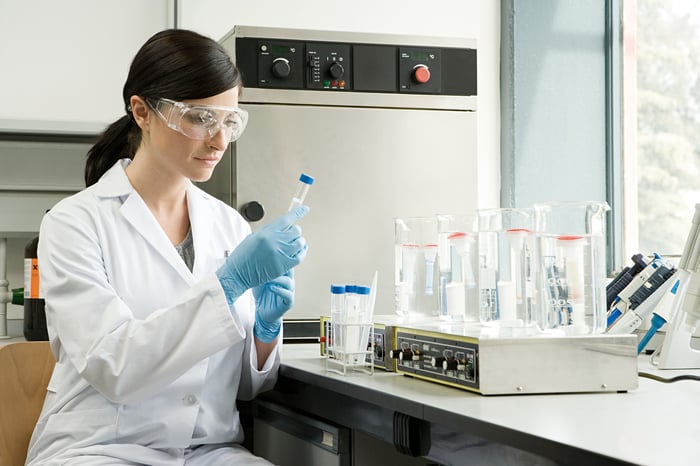 Biotech stocks have taken a beating over the past year, creating plenty of bargains. The stocks hardest hit were those without sustainable profits, but companies with steady earnings to report have been beaten down as well. The average stock with earnings to measure in the iShares Nasdaq Biotechnology ETF  (NASDAQ: IBB), a fund that tracks an index consisting of most biotech stocks on the exchange, is about 20.9 times earnings, far below the S&P 500 average of about 24 times earnings.

Amgen (AMGN 0.12%), Biogen (BIIB 0.56%), Ligand Pharmaceuticals (LGND 0.64%), and Gilead Sciences (GILD 0.98%) all have rock-solid fundamentals, paths to sustained growth over the long term, and recent prices of 17 times trailing earnings or less. In other words, they're cheap.

Let's take a closer look to see if they belong in your portfolio.

California's blue-chip biotech, Amgen, finished the first quarter with total revenue of $5.5 billion, 9.8% higher than the same period last year. On the bottom line, the company did even better, with earnings growth of 18% to $2.50 per share. The company finished March servicing about $32 billion in long-term debt, which is easily outweighed by $34.7 billion in cash and marketable securities.

Amgen's existing cash pile, and its free cash flow of $8.8 billion generated over the past 12 months, give it the opportunity to buy plenty of potential growth drivers. One on pharmacy shelves since last summer is the next-generation cholesterol-lowering drug, Repatha. First-quarter sales of just $16 million aren't terribly exciting, but the medical community is playing wait-and-see with this drug.

Repatha's ability to lower cholesterol isn't in question, but justifying its steep price of about $14,000 per year among less expensive options isn't as easy. Results from a long-term study measuring Repatha's ability to lower the risk of heart attack and stroke are expected later this year. If they're positive enough to support Repatha's relative value, the drug could add more than $4 billion to Amgen's annual sales at its peak.

Amgen also uses its massive cash flows to pay a $1 quarterly dividend, for a 2.6% yield at recent prices. Amgen needed only 39.5% of first-quarter profits to make those payments to each shareholder, which means the stock has plenty of room for big increases going forward. At about 17 times trailing earnings, this stock is is a solid deal.

This biotech's stock has been beaten up badly over the past year for valid reasons, but the punishment has been far too severe. The company recently posted disappointing results from a drug that might have been the first to repair damage caused by multiple sclerosis, instead of just slowing its progression.

It was one of the company's moonshot projects, but not the most important one. I believe Biogen's Alzheimer's candidate has a chance at becoming the first approved treatment to effectively slow progression of the disease. Another Alzheimer's candidate in Biogen's arsenal could play a complementary role going forward.

While Biogen is taking shots at the moon, it's also wisely investing in biosimilar development. It recently presented positive long-term data for two biosimilars currently available in the EU that reference drugs with combined U.S. sales of about $9.55 billion last year.

Developing biosimilars is far more involved than is the process for small-molecule generics, and in turn biosimilars carry better profit margins. Biogen's biosimilars might not reach the heights of the products they reference, but generally priced around 70% of the drugs referenced, they could provide enough high-margin sales to keep the company's bottom line growing.

Over the past 12 months, Biogen generated $3.7 billion in free cash flow and ended March with about $5 billion in cash and short-term assets. With just $6.5 billion in long-term debt, Biogen's balance sheet is rock solid. At a recent price of just 15.4 times trailing earnings, this blue-chip biotech is a great value.

This may be the fastest growing biotech you've never heard of. Its flagship product, Captisol, is a vital component of numerous marketed drugs that generate a high-margin stream of royalties that's growing fast. Ligand's first-quarter revenue more than doubled over the same period last year to $29.6 million.

Captisol's revenues are rising, but some of Ligand's recent growth is partially due to recent acquisitions that should keep the company's sales expanding rapidly. In January it closed the $178 million purchase of OMT, Inc., which came with license agreements including 16 compounds in development by a who's-who list of industry heavyweights and start-ups.

In 2014, Ligand borrowed $245 million in the form of low-interest five-year notes (just 0.75% annually) that are basically convertible into one Ligand share for every $75.04 of the principal amount borrowed once the notes mature. With the stock's recent price of about $125, those debtholders would love to exercise the option, diluting shares, and slimming current investors' slice of future profits.

Ligand made this rock-solid biotech list because settling that debt shouldn't be an issue for the company. Since the company borrowed the funds, its trailing-12-month free cash flow has more than doubled to $42.9 million, and it exited March with about $113.2 million in cash and short-term investments. I'd say the company is on solid financial footing, with a path to growth ahead, and it's not incredibly expensive at just 10.2 times trailing earnings.

Gilead Sciences: at a peak, or just beginning?

At just 7.4 times trailing earnings, Gilead Sciences is the least expensive biotech stock here, because many investors think it peaked last year. While this year's sales might be relatively flat compared with 2015, I think Gilead is well positioned to deliver long-term gains.

Gilead's hepatitis C antivirals still dominate the space, and competitors have resorted to steep discounts to gain toeholds. I think the company's recently approved hepatitis C pill for everyone will give Gilead a competitive edge for years to come, but that's not its only opportunity for growth.

Intercept Pharmaceuticals recently earned FDA approval for treatment of a related liver condition with Ocaliva, which is basically bile acid in a tablet. Intercept would like to expand Ocaliva's label to include millions of NASH patients, but I think Gilead has a chance at dominating this space in the years ahead.

First, bile-acid tablets come with some side effects, such as rash and lower "good" cholesterol levels. Gilead has a drug that may act on the same end target, but without the side effects. Since the disease involves inflammation, tissue scarring, and metabolism issues, Gilead is working on a combined approach that investors will probably learn more about in the quarters ahead.

Gilead has one of the strongest balance sheets in the business, with about $8.3 billion in cash and securities, and trailing free cash flow of about $17.7 billion. The company has used its massive cash flows to pay a handsome dividend, with a yield of about 2.2% at recent prices, and to reduce its share count dramatically. It lowered the number outstanding by about 5.2% during the three months ended in March, and in February it added $12 billion to the $15 billion repurchase program initiated last January.

This rock-solid biotech's top line might stagnate for several quarters, but its long-term shareholders are coming out ahead.

Cory Renauer has no position in any stocks mentioned. You can follow Cory on Twitter @TMFang4apples or connect with him on LinkedIn for more healthcare industry insight. The Motley Fool owns shares of and recommends Biogen and Gilead Sciences. We Fools may not all hold the same opinions, but we all believe that considering a diverse range of insights makes us better investors. The Motley Fool has a disclosure policy.

2 Top Healthcare Stocks to Buy for the Long Haul
356%