The past five years have been nothing short of stellar for Cintas (NASDAQ:CTAS). The stock has soared, handily outperforming the S&P, and also fellow uniform renters G&K Services (NASDAQ:GK) and UniFirst (NYSE:UNF): 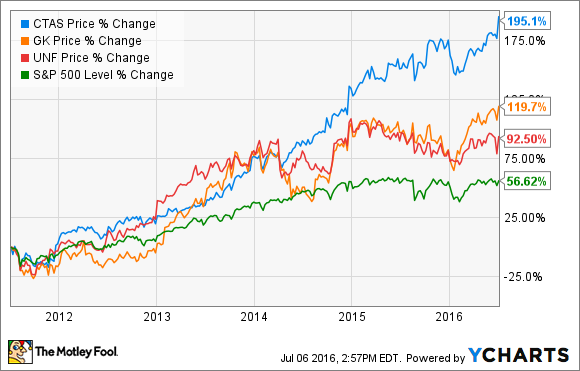 But when a stock has a tremendous run like that, it's only natural to wonder if it's overvalued. And that's proving to be a very tricky question to answer. By one common measure, it is. By another, it's not. Let's see if we can figure out the real truth.

When assessing a stock's value, the first places to look are standard valuation metrics. The most prominent of these is the price-to-earnings ratio, which measures the stock's price against the company's annual earnings. A stock with a lower multiple than its peers is, generally speaking, more likely to be undervalued. I've compared Cintas' current P/E ratio with its uniform rental peers, as well as Aramark (NYSE:ARMK), a food service provider that also has a sizable uniform-rental division. 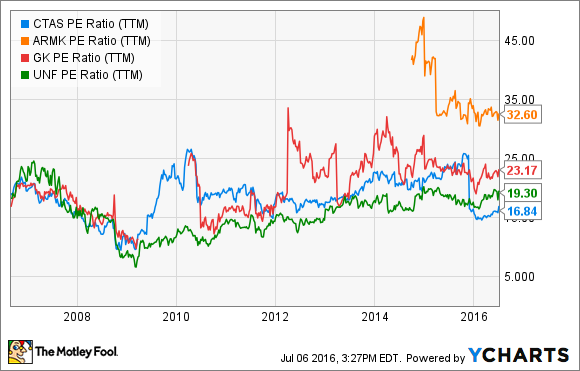 So the P/E ratio indicates that Cintas may currently be undervalued. But it would be small-"f" foolish to base an assessment on a single metric -- because another common metric tells a very different story.

That other valuation metric is the lengthily named metric of enterprise value to earnings before interest, taxes, depreciation, and amortization -- usually shortened to EV/EBITDA, or just called the enterprise multiple. Again, a lower number often means a company may be undervalued.

Surprisingly, Cintas has the highest enterprise multiple of the group -- although it, Aramark, and G&K are clustered fairly closely together: 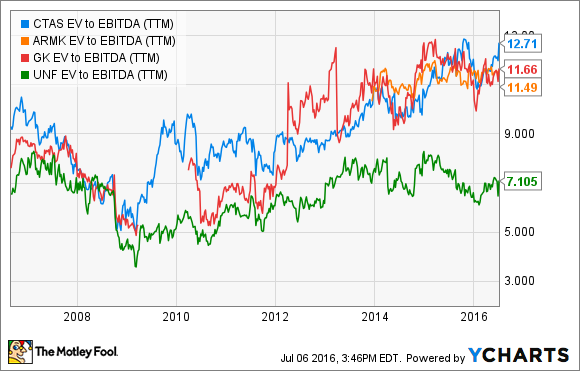 That's a very different story than the P/E ratios tell. In fact, this could indicate that the stock is actually overvalued, relative to its peers -- particularly UniFirst, whose enterprise multiple is much lower than those of the others. Two metrics, different stories. Let's try to figure out why.

Well, the enterprise multiple may show different results than the P/E ratio because it takes debt into account, which P/E does not. So the first thing we should check is whether Cintas is carrying an unusually high debt load, in which case it may not be undervalued at all.

Here is a chart showing the debt-to-equity ratios of these four companies: 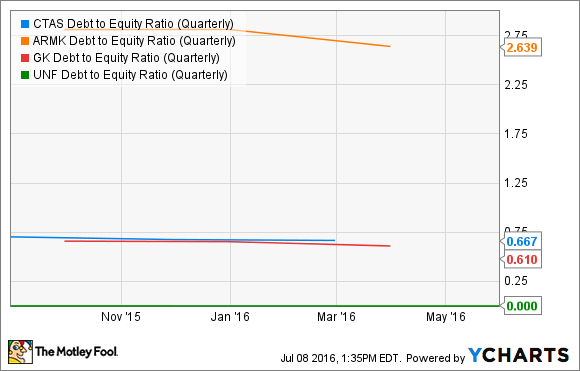 UniFirst isn't carrying any debt at all, which explains its very low enterprise multiple. And while Cintas is carrying some debt, its debt ratio isn't out of line with those of its peers -- although Aramark's sure seems to be. So there must be another explanation for the disparity.

Digging into Cintas' income statement provides the key as to why these valuation metrics are telling such different stories. You'll notice in the chart showing the companies' relative P/E ratios that Cintas' drops sharply at the end of 2015, from over 25 to just above 15. There's a reason for that: The company sold its stake in Shred-It during its Q2 2016, which ended last Nov. 30.

That sale added more than $200 million to the income statement, categorized as "income from discontinued operations, net of tax," and which was factored in after taxes and interest, which affected the company's reported net income (and thus, its P/E ratio), but not its EBITDA.

Even if a stock isn't undervalued by traditional metrics, that doesn't mean it's not still a good company, or a buy. In fact, you should always look beyond valuation metrics when deciding whether a stock is worth your money. Otherwise, you could get misled by numbers that aren't telling the whole story -- like Cintas' P/E.

Cintas is still a company with a lot of strengths and a good track record of strong growth and creating value for its shareholders. However, UniFirst, with its comparatively low P/E, low enterprise multiple, and zero debt, seems to also be worth a closer look -- because when picking stocks, you should always take a closer look.