How national toy retailers like Wal-Mart and Target are making Hasbro's job harder. 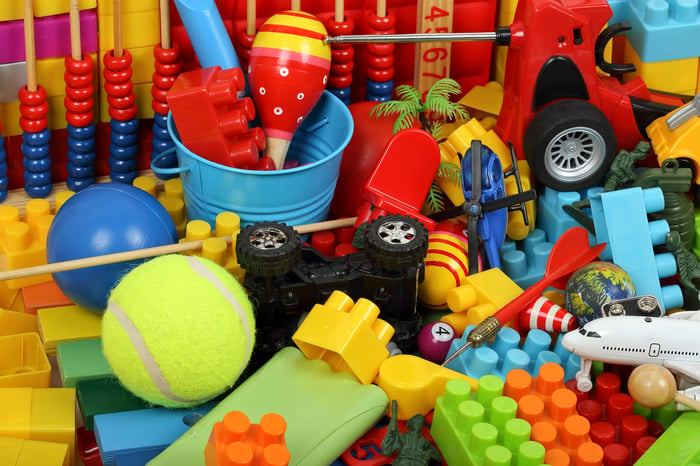 Hasbro's (HAS -0.10%) storerooms are packed to the brim with toys and games right now. The company revealed last week that its inventory levels ballooned higher by 50% in the second quarter. This wasn't simply a seasonal bounce, either. Inventory didn't budge in last year's Q2.

However, this buildup wasn't driven by weak demand. In fact, Hasbro's 10% sales improvement beat consensus expectations and came in far ahead of rival Mattel (MAT -0.66%) and its 3% revenue decline. Hasbro's profitability rose in Q2 as well, indicating that the sales growth wasn't powered by excessive promotions.

Still, the inventory pop highlights a large and growing risk for the business.

Why the inventory spike?

Hasbro had no choice but to boost its inventory compared to the prior year because many of its biggest sellers are brand new to its portfolio. Thanks to a licensing deal with Disney (DIS -0.01%) that handed over exclusive rights to the Disney Princess and Frozen lineups from Mattel, Hasbro needed to create a stockpile of these products well in advance of the holiday shopping season.

They join Star Wars, Nerf, and Play-Doh as franchises which are likely to perform well in the second half of the year.

Investors can see plain evidence of their popularity already. Hasbro's girls category got help from the Princess lineup to soar 35% higher in Q2, for just a slight slowdown from the prior quarter's 41% spike . Mattel's comparable category suffered a 60% slump, mostly because of the Disney switch.

It isn't easy to accurately project demand for any product -- especially toys and games. Undershoot the number and you leave money on the table and create frustrated retailers and customers. On the other hand, overconfidence will leave you with tons of extra stuff that you then have to mark down to clear out your stockroom.

Recently, big retailers like Wal-Mart, Toys "R" Us, and Target, which together account for nearly 40% of Hasbro's sales, have been refusing to take on that burden. Instead, they're making smaller orders and delaying the purchases until later in the season, when demand can be easier to forecast.

That's good news for them, but bad news for Hasbro. Here's how management explains the shift in its annual report. "While these techniques reduce a retailer's investment in inventory, they increase pressure on suppliers like us to fill orders promptly and thereby shift a significant portion of inventory risk and carrying costs to the supplier."

Hasbro executives are confident that they're producing and stocking the right levels of merchandise across the portfolio. "The quality of our inventory is high," Chief Financial Officer Deb Thomas told investors in a conference call, which implies that the buildup is heavy on the most popular brands and will likely disappear quickly.

If they're right, and demand plays out more or less at the level they projected, then investors can expect to see even stronger second half results that include hefty sales gains and profitability growth.

Hasbro's carrying an unusually large financial risk heading into the critical holiday season, though. Most of it has to do with its success in snatching popular Disney products from Mattel. The other key part of that risk is retailers' growing refusal to stock up on toys until the last minute, which makes Hasbro's job harder, and potentially more expensive, going forward.