Please ensure Javascript is enabled for purposes of website accessibility
Log In Help Join The Motley Fool
Free Article Join Over 1 Million Premium Members And Get More In-Depth Stock Guidance and Research
By Travis Hoium – Jul 21, 2016 at 10:45AM

Could a deal to save TerraForm Global finally be near? Shares of yieldco TerraForm Global Inc. (NASDAQ: GLBL) surged more than 10% in trading on Wednesday, July 20, after the company revealed that it's working with sponsor SunEdison to sell the shares the latter currently holds in bankruptcy. No deal is imminent, but in a presentation directed at bondholders, TerraForm Global's management tried to make clear that the company was solvent and looking for options for survival. Here are a few takeaways.

TerraForm Global is far from dead

One of the first things TerraForm Global did was lay out its operations for the past six months. Since there has been a dearth of financial information from the company since Q3 2015, it's been a while since we've been updated on its revenue and cash flow. The biggest numbers of note were projections of cash available for distribution (CAFD) of $56 million to $64 million in the second half of 2015. First-quarter 2016 CAFD was $42 million-$48 million.

The CAFD was driven by 917 MW of operating assets around the world, which you can see below. 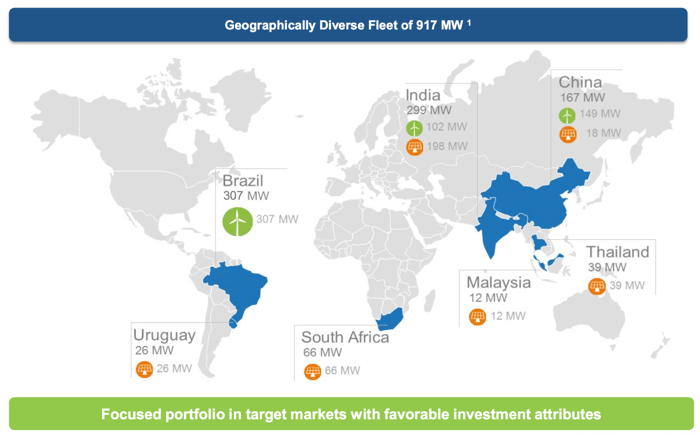 The company didn't highlight its current debt position, which stood at $1.24 billion after the third quarter of 2015, but it was good to get some clarity on the cash balance and operations.

Could a buyer save TerraForm Global?

There's clearly value in the assets TerraForm Global holds, but what exactly it's worth and who will buy it is up in the air. But we at least know that SunEdison may be willing to part with the company's shares as part of the bankruptcy proceedings.

If a sale brings stability to the yieldco, I think there's significant upside for shareholders. The 33% dividend yield may not last, but a more stable leadership team and balance sheet could help unlock the value in shares and set up a dividend that can be maintained long term.

The details are far from ironed out at TerraForm Global, but this news is a positive for shareholders. Now the bankruptcy court will have to decide who will buy these assets and how the deal will be structured. The bad news is, that could still be a drawn-out process for everyone involved.