Invest in oil and gas pipelines -- for fun and profit!

Pipelines are long. But they can keep producing profits for even longer. Image source: Getty Images.

As they rocked on the Russells' front-porch glider in the stillness of the Midwestern twilight, the parade of Nashes and Studebakers and the clanging of the trolley car would put a thought in Warren's mind. ... "All that traffic," he would say to her. "What a shame you aren't making money from the people going by." As if the Russells could set up a toll booth on North 52nd Street. "What a shame, Mrs. Russell."

In just a handful of words, this quote, taken from Roger Lowenstein's classic Buffett: The Making of an American Capitalist, encapsulated the investing philosophy of legendary investor Warren Buffett. At the same time, for lesser investors, it set us up a sort of Holy Grail to seek in investing: the toll booth. The business without competitors, that all customers must use and pay for, and that can (theoretically) raise its prices as high as it likes -- and know the customers will still pay.

We all seek it. And at least some of us believe the best place to find it (other than in a literal, publicly traded toll booth) may be in the pipeline industry. Here are three of our favorite picks for that purpose.

Invest in the best -- or at least the biggest

Rich Smith: Energy giant Kinder Morgan, Inc. (KMI -0.33%) has been called "the undisputed leader in energy infrastructure" -- and rightly so. According to data from S&P Global Market Intelligence, Kinder Morgan controls the largest pipeline for transporting petroleum and gas products in the U.S., stretching to approximately 84,000 miles of pipelines and 180 terminals across the country. As my fellow Fool Matt DiLallo pointed out last year, Kinder "owns and operates the largest natural gas pipeline network." It's "the largest independent transporter of petroleum products in North America, the largest transporter of carbon dioxide, and the largest independent terminal operator," too.

The company does just under $49 billion in business annually, transporting oil and gas supplies, yet sells for a price-to-sales ratio of less than 1.0. Kinder Morgan also sells for a price-to-book ratio of less than 1.4, implying the market values its near-legal monopoly position on the pipeline market -- a position it's taken Kinder 80 years to assemble -- at just 40% more than the value of the pipes and other hard assets themselves.

Fact is, Kinder Morgan stock looks so much like a toll booth business that Warren Buffett's own Berkshire Hathaway (BRK.A -0.70%) (BRK.B -0.64%) bought $400 million worth of Kinder Morgan stock earlier this year -- and the stock is up 56% since. At that price, it's valid for investors to ask whether there's still any "value" left in the stock, which sells for more than 40 times free cash flow today, and 351 times earnings.

On the other hand, for those who look at the valuation and say, "it's too expensive," you have to wonder: Buffett still owns Kinder Morgan stock. He hasn't sold out yet. So what does Buffett know that you don't?

An energy company that increased its dividend this year

Chuck Saletta: Spectra Energy (SE) has established itself as one of the strongest companies in the energy space. The pipeline giant actually increased its dividend earlier this year, at a time when many other energy-related businesses -- including other pipelines -- were slashing theirs. With a dividend yield above 5% and one that was covered enough to increase during some tough times in the energy patch, Spectra Energy has structured its "toll road" pipeline business to reward its shareholders.

Spectra Energy's balance sheet provides it with a substantial portion of that strength. Its general partner shares sport a reasonable 1.5 debt to equity ratio, while the Spectra Energy Partners (SEP) units that represent the limited partnership stake clock in at a fairly light level, around 0.6. In an industry known for heavy debt loads to fund substantial capital spending, that debt load lets it retain flexibility in tough times, like the energy sector has seen this year.

Not just a monopoly in name, a regulated monopoly

Tyler Crowe: Several pipeline companies operate in a way that is similar to a monopoly, but they aren't necessarily regulated as a monopoly, like you might see with a utility company. There is one exception to this: Magellan Midstream Partners (MMP -0.95%). While so many other companies focus on crude oil and natural gas pipelines, Magellan has invested heavily in a network of refined petroleum products pipelines -- think gasoline and diesel -- that is the largest in the nation. More importantly, much of that pipeline network delivers these products to places where Magellan's pipeline is the only game in town, so the Federal Energy Regulatory Commission sets fixed rates that Magellan can charge every year that ensure a certain return on investment.

The other thing that sets Magellan apart from so many other companies in this business is that it has taken a very conservative approach to growth that focuses on higher returns rather than just growth for growth's sake. The company doesn't have the massive backlog of projects the other companies mentioned here have, but its modest growth also means it doesn't routinely issue new shares and debt to pay for that growth. Not having to increase dividend for ever-increasing share counts has been part of the reason Magellan has been able to raise its dividend by 12% annually over the past 10 years. 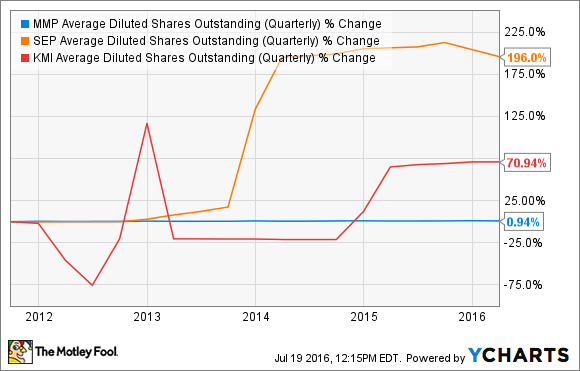 Magellan's growth numbers will never blow you away, like those of some of its peers, but it has kept its head down for more than a decade and generated strong returns and an ever-growing dividend from its regulated pipeline network. If you're looking for consistent returns, Magellan Midstream Partners is hard to beat.

And there you have it, folks. We promised you three great pipeline stocks -- each a veritable legal monopoly in its own right -- and we've delivered. Which of them will work out best? Give us your best guess in the comments section below.

Or even better, see how your picks compare to everyone else's. Stack your reputation up against The Motley Fool's best and brightest, and pick one (or more!) of these stocks to outperform on our free stockpicking service, Motley Fool CAPS.