Shipments of cigarettes declined 4.8% worldwide, and revenue fell across all geographic regions except the European Union. But on a constant currency basis, revenue rose across all regions except EEMA (Eastern Europe, Middle East, and Africa) -- indicating that the company's pricing power was still offsetting volume declines.

But here's the silver lining...

Despite those disappointing figures, demand for PMI's new iQOS devices actually rose. The iQOS is an electric device that heats -- instead of burning -- a special cigarette called a Marlboro HeatStick; smokers then inhale a heated nicotine-infused vapor instead of smoke. PMI claims that this vapor is less dangerous than cigarette smoke, yet more satisfying to smokers than e-cigarette vapor.

The iQOS was launched nationwide in Japan in mid-April and has already claimed a 2.7% share of the country's cigarette market. PMI claims that 70% of iQOS purchasers in Japan have been either "fully or predominantly" converted to it. The device is cannibalizing about 35% of PMI's own cigarette portfolio in Japan, but the company notes that many smokers are "up-trading" to HeatSticks from cheaper brands, thus boosting its overall revenue. PMI has already launched iQOS in 10 markets. While Japan has been the best-performing market so far, other launch markets have posted similar growth. 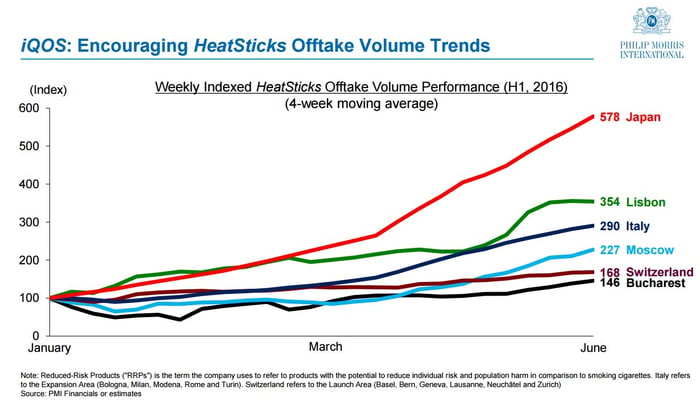 Additionally, 68% and 70% of iQOS users in Switzerland and Italy, respectively, were "fully or predominantly" converted to the device. Based on these encouraging results, PMI has declared that iQOS is "on track to launch in key cities in around 20 markets by end of 2016."

The market for "heat-not-burn" devices like the iQOS is currently much smaller than the market for e-cigarettes. Another major tobacco maker that sold a similar device was Reynolds American (NYSE:RAI), which launched a heated cigarette in the mid-1990s called Eclipse.

When anti-tobacco groups questioned the safety of Eclipse, Reynolds claimed that the device produced about 80% fewer carcinogens than traditional ultra-light cigarettes. However, the Eclipse never really caught on, and Reynolds focused on growing its Vuse e-cigarette brand instead. Reynolds rebranded Eclipse as Revo and started testing it in a few markets last February, but it admitted a few months later that sales fell short of expectations.

Despite those domestic challenges, Altria (NYSE:MO) -- PMI's former parent and Reynolds' rival -- signed a partnership with PMI in late 2013 to sell the iQOS and HeatSticks in the U.S. In exchange, PMI would gain the right to sell Altria's e-cigarette brands, like MarkTen and Green Smoke, abroad. Altria hasn't launched iQOS nationwide yet, but it could be tough for the product to stand out in the crowded market of traditional cigarettes, e-cigarettes, and custom vape devices. The device could also be subject to the FDA's controversial proposal to test all tobacco products launched after Feb. 15, 2007 -- which includes all e-cigs and vapor devices.

However, other countries with less crowded markets and fewer regulations could be fertile ground for heated tobacco devices, as PMI has demonstrated with iQOS. That's why Japan Tobacco International bought a stake in heated device maker Ploom five years ago, and why British American Tobacco (NYSE:BTI) -- which already sells e-cigarettes and nicotine inhalers -- has been testing out a heated tobacco product.

What iQOS means for PMI investors

iQOS is still a tiny product for PMI and doesn't generate much revenue yet, but Wells Fargo analyst Bonnie Herzog believes that the iQOS could displace up to 30% of the combustible cigarette industry in developed markets by 2025. Herzog notes that growth would be a "win-win for both Philip Morris and Altria" and could serve as a "catalyst to reunite the companies."

I've previously argued that reuniting the two companies was illogical, since PMI and Altria split up for a reason -- the former would grow when markets abroad were strong and the dollar was weak, while the latter would flourish when the domestic economy and the dollar were strong. Nonetheless, the growing popularity of iQOS could still bolster both companies and carve out a new niche market between cigarettes and e-cigarettes over the next few years.