Clean Energy Fuels Corp. has used a combination of stock and cash to pay down a lot of debt so far in 2016. Even after serious dilution, shareholders are better off now. Here's why.

The weight hanging over Clean Energy Fuels Corp. (CLNE -5.18%) for some time now has been debt -- particularly, $150 million in convertible notes due next month. However, as the company announced on July 15, that debt is no more, with the final tranche having been paid off with a combination of cash and stock.

And while dilution isn't fun -- this deal alone watered down shareholders by 14% -- long-term investors will benefit from this move, as well as moves earlier this year that caused dilution. Here's a closer look at why this is a situation when investors should be happy their holding got watered down.

What Clean Energy's been dealing with

Clean Energy Fuels entered 2016 with $572 million in long-term debt, with $150 million of it due in August. Over the past several years, the debt load has weighed heavily on the company, costing it roughly $40 million per year to service. The cost has been especially troublesome, considering the assets that debt paid for have been slow to generate the returns management expected following the crash in oil prices in 2014, which has caused diesel prices to do this: 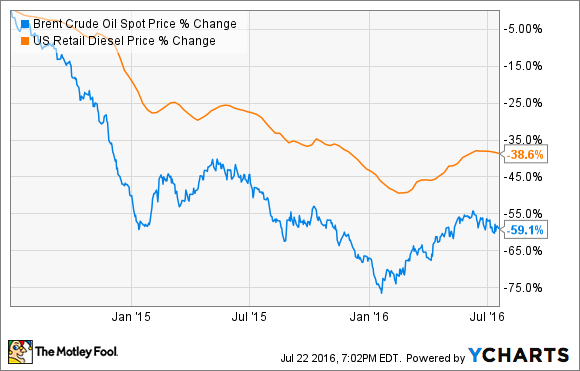 In short, this has led to slower natural gas adoption in the trucking industry than Clean Energy was betting on, and instead of getting a quick payback on the expansion that debt funded, the company has instead been saddled with the cost of the debt while the market for natural gas trucking has been slow to build.

Combine that with the full retirement of the 2016 notes, and it looks like this: Clean Energy Fuels has retired $209.2 million in long-term debt in 2016, using $118.6 million in cash (and some short-term debt via a revolving credit instrument) and $20.3 million in shares. Long-term debt was over $570 million at the end of 2015. That's a 35% reduction in long-term debt, which should reduce debt payment expense by as much as $15 million per year. It also positions the company with no debt maturities until 2018, when it has $217.5 million in debt coming due. 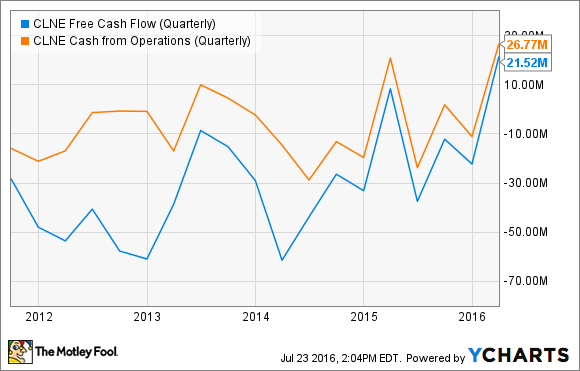 What it means for Investors going forward

First, the "bad": In less than one year, more than 20 million new shares have been issued, diluting shareholders by 22%. In other words, if you did nothing, you now own 22% less of the company than you did at the end of 2016.  But this dilution wasn't unexpected. Management told us in late 2015 that it would be using shares to retire part of its debt, and the market has probably been pricing the impact of dilution into the stock.

But there's a lot of good from this when it comes to cash flows. By retiring $209 million in debt, the company will reduce its annual interest expense by at least $10 million. That might not seem like much, but consider this: Clean Energy Fuels reported a profit of $2.8 million last quarter. When factoring out some non-cash gains, the "cash profit" was more like $1.4 million. So getting a $2.5 million-per-quarter reduction in cash costs by paying down its debt is a major boost to net cash flows.

This is especially important right now, as the company makes the transition from heavy investments in its network to profitable growth and leveraging those assets.

Jason Hall owns shares of Clean Energy Fuels, and has the following options: Long Jan 2017 $5 calls, Short Jan 2017 $5 puts, and Long Jan 2017 $3 calls. The Motley Fool owns shares of and recommends Clean Energy Fuels. We Fools may not all hold the same opinions, but we all believe that considering a diverse range of insights makes us better investors. The Motley Fool has a disclosure policy.