Please ensure Javascript is enabled for purposes of website accessibility
Log In Help Join The Motley Fool
Free Article Join Over 1 Million Premium Members And Get More In-Depth Stock Guidance and Research
By Demitri Kalogeropoulos – Jul 24, 2016 at 9:41AM

Key earnings announcements are on tap, including from Apple, Twitter, and Under Armour.

The slight increase that stocks logged last week was still enough to keep indexes at record highs as earnings season rolls on. The Dow Jones Industrial Average (^DJI 0.45%) and the S&P 500 (^GSPC -0.03%) are now each up by more than 6%, year-to-date. 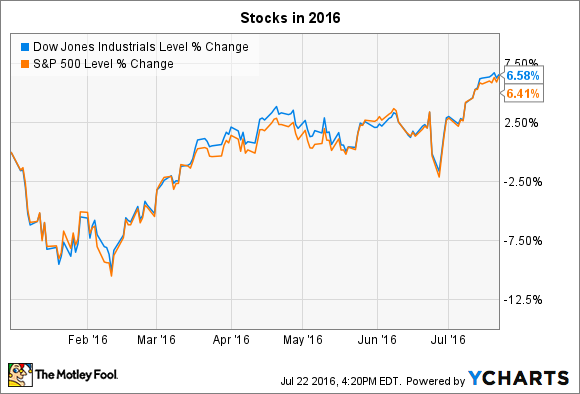 The week ahead brings several powerhouse quarterly reports, including from Apple (AAPL -1.96%), Under Armour (UAA 0.21%) (UA 0.59%), and Twitter (TWTR), that could add to those gains or help push indexes lower over the next five trading days. Here are a few key trends for investors to watch in those announcements.

Apple's stock is limping into its Q2 report, with shares down 23% over the past 12 months. Investors are bracing for an uncharacteristically steep decline in both earnings and revenue for the tech titan on Tuesday afternoon: Consensus estimates call for 15% lower sales as profit slumps by 25%.

The popularity of the iPhone SE could drive margins down this quarter. Image source: Apple.

A key factor in that earnings drop is a gross profit margin that's falling prey to several negative trends, including slowing iPhone sales and the demand for cheaper models in the product's lineup. Apple is projecting a margin of roughly 38% of sales this quarter, compared to 40% a year ago. On a $42 billion revenue base, that small shift can make a huge difference .

Investors will be interested in whether Apple executives see that profitability decline continuing into the current quarter. Meanwhile, CEO Tim Cook will likely stress the company's services segment, which posted a healthy 20% boost last quarter. Finally, share repurchases and dividend updates will be scrutinized since many income investors have flocked to this stock for its massive cash return plans.

Exercise apparel specialist Under Armour posts earnings before the market opens on Tuesday as the stock price and operating trends are headed in opposite directions. Shares are down so far this year despite UA's having just managed its 24th consecutive quarter of 20% or better growth .

Like rival Nike, Under Armour's profitability has been hurt by an inventory buildup in the U.S. market. Gross profit margin fell by a percentage point to 46% of sales in Q1. Besides firming margins, investors will be looking for the company to continue expanding out of its core apparel niche into related categories like footwear and connected fitness. In addition to those growth opportunities, CEO Kevin Plank will likely discuss the company's marketing plan around the upcoming Olympic games, which represent an important advertising opportunity as the retailer attempts to establish its brand around the world.

Twitter kicks off a big week for social media stocks with its Q2 results on Tuesday. Consensus estimates target a 20% revenue boost for the struggling tech company even as Facebook's sales spike higher by 50%.

Despite deep engagement levels within its core niche, Twitter is lagging its social media peer in user growth and in its ability to monetize that base. Monthly active users ticked up by just 3% last quarter – compared to a 15% pop for Facebook. Twitter's net loss improved, but remained well in the red.

CEO Jack Dorsey is aiming to turn both of those trends around through many of the same channels that Facebook is targeting, including video streams, enhanced private messaging, and improved live broadcasting. Investors will get important figures showing how those product updates are being received – and whether they're translating to greater advertising revenue for Twitter -- on Tuesday.