Why Sprint and Outerwall made big moves higher on Monday. 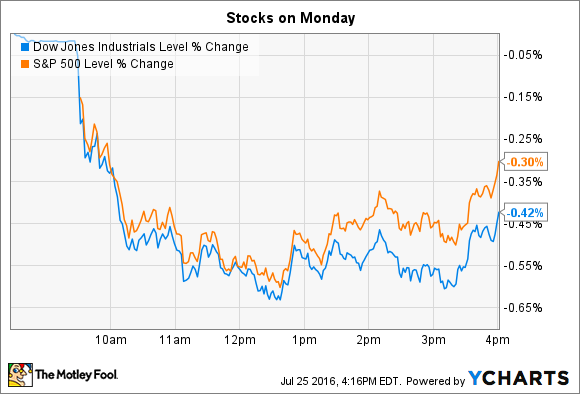 Hundreds of companies are due to post earnings results over the next few trading days and that should drive large price swings in many individual stocks. Notable movers on Monday included Sprint (S), which announced improving quarterly numbers before the opening bell, and Outerwall (OUTR), which agreed to be taken private.

Customer growth was the key driver behind that rebound as Sprint made progress both in attracting new customers and in holding on to existing ones. Executives said their latest advertising campaign has been the most effective to date and helped Sprint gain market share against its biggest rivals for the first time in over five years. It added 173,000 postpaid phone customers for its best Q1 by that metric since 2007. "We had another quarter of solid progress in our turnaround," CEO Marcelo Claure said in a press release.

Churn, or the rate of cancellations, dove to a record low 1.4%, which management credited to a "focus on the quality of customers" and improvements in Sprint's network experience.

In addition to the improving operating trends, investors celebrated the fact that Sprint's costs are coming down, with expenses falling by $550 million. That wasn't nearly enough to bring the company back into positive earnings territory. In fact, net loss was $300 million. Still, Sprint's rebound appears to be gaining steam and investors responded by sending the stock sharply higher.

Outerwall, the company behind Redbox DVD rental kiosks and Coinstar change-processing machines, rose 11% after agreeing to be purchased by private equity firm Apollo Management (APO). The two reached a deal that valued Outerwall's business at $52 per share. While that's a hefty 51% premium over the stock's price in March when executives announced they were exploring their strategic options, it's a significant discount from the $85 per share that the business was worth just last summer.

However, operating trends have turned lower since then. The Redbox business posted an 18% decline in DVD rentals last quarter as people flocked to streaming video alternatives, which helped produce a 31% dip in operating income. Operating cash fell by more than one-third and the company announced plans to remove as many as 2,000 Redbox kiosks this year.

Given that worsening sales environment, it makes sense that Outerwall would link up with a well-capitalized business that could give its management team more flexibility. Apollo turned out to be executive's pick following what they called a "robust" review process. "Apollo is an ideal partner to support Outerwall's efforts to continue serving our millions of loyal customers and dedicated retail partners," CEO Erik Prush said in a press release.

Outerwall expects the all-cash deal to close during the third quarter.