This airline's stock looks as attractive as ever following a solid Q2 earnings report.

Shares of Alaska Air (ALK 0.02%) have been hit hard since early April, when the company announced plans to buy its smaller rival Virgin America (VA) for $2.6 billion. The stock fell from around $80 to as low as $55 before rebounding to $64.60 as of the end of last week. 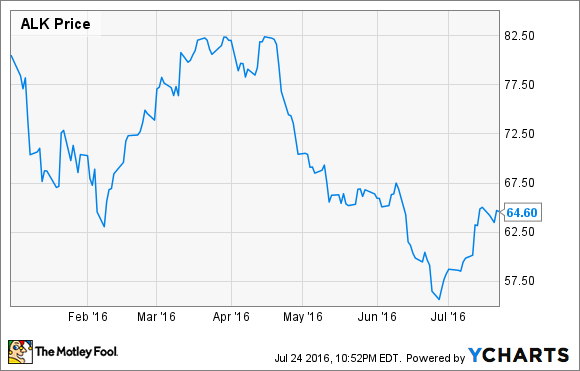 Part of the weak stock performance appears to have been driven by sticker shock related to the Virgin America acquisition. (The buyout price went up by about 15% in the last few days of bidding.) The weak unit revenue trends that have pummeled most of the airline industry were also a factor.

Last month, I wrote that Alaska Air stock looked like an extremely good buy at its discounted price. The company's Q2 earnings performance made it clearer than ever that this is a dramatically undervalued stock.

First, and most importantly, Alaska Air once again produced an industry-leading profit margin in Q2. Alaska's adjusted pre-tax margin reached a record 28.4% last quarter, about 5 percentage points ahead of Southwest Airlines, which was probably second-best in the industry.

Alaska Airlines has the highest profit margin in the airline industry. Image source: The Motley Fool.

Furthermore, Alaska's efforts to boost ancillary revenue are paying off. "Other revenue" rose 16% year over year last quarter, cushioning the blow from a 7.7% drop in passenger revenue per available seat mile (PRASM). Alaska's PRASM decline was driven by its own rapid growth -- it grew capacity 11% year over year -- and a brutal 13% year-over-year increase in competitive capacity.

The Virgin America acquisition is coming together

Second, Alaska is making progress toward finalizing the Virgin America acquisition. The company has an agreement with the DOJ on the antitrust review timeline and expects to be able to close the deal early in the fourth quarter without having to make any concessions. It has also selected a post-merger leadership team for Virgin America.

Another important piece of good news is that Alaska Air has locked up committed financing for the acquisition at extremely low rates. Due to the favorable interest rate environment, Alaska's investment-grade credit rating, and the availability of high-quality aircraft as collateral, the company expects to pay an average interest rate of less than 3%.

Alaska plans to finance $2 billion of the purchase price. With an interest rate below 3%, the total cost of financing would be less than $60 million annually. Meanwhile, Virgin America is likely to post pre-tax earnings of around $250 million this year. The acquired earnings (net of interest costs) will add about $1 to Alaska's earnings per share going forward.

Revenue trends should improve in the next few quarters

Finally, Alaska is well positioned to stabilize its unit revenue trend over the next several quarters. Competitive capacity growth is expected to remain high at 13% in Q3 and 12% in Q4 -- but other airlines have finally started to trim their plans to grow in Alaska's markets.

Meanwhile, Alaska itself plans to reduce its growth rate from 11% last quarter to 8% in Q3 and just 3% in Q4. A significant chunk of its growth in Q4 and especially in 2017 will come from new flights to capacity-constrained Newark Airport (traditionally a high-fare market) and Alaska's recently awarded Los Angeles-Havana route.

This slowing growth will be the biggest driver of unit revenue improvements at Alaska. But the company is also well-positioned to see continued growth in ancillary revenue, this time from the rollout of "Premium Class" extra-legroom seating, which begins in late 2016.

Right now, Alaska Air stock trades for just 9 times earnings. Based on the company's strong track record, the huge earnings growth that will come from the Virgin America acquisition, and the likelihood that unit revenue trends will improve significantly over the next several quarters, this seems way too cheap.

As Alaska Air digests the Virgin America acquisition and wrings out merger synergies, the company's earnings should continue to march higher. Eventually, investors are likely to take notice.

Adam Levine-Weinberg owns shares of Alaska Air Group. The Motley Fool recommends Virgin America. We Fools may not all hold the same opinions, but we all believe that considering a diverse range of insights makes us better investors. The Motley Fool has a disclosure policy.