Some good news would be a welcome change of events for shareholders.

Once a stock market darling, Whole Foods Market (WFM) stock has now failed to outperform the S&P 500 over the past one, five, and 10 years. With a losing streak like that, it can be difficult for even the most patient of investors to stick with the company. However, the market is offering a glimmer of hope for the troubled grocer as the stock has recovered from 52-week lows over the past three months. 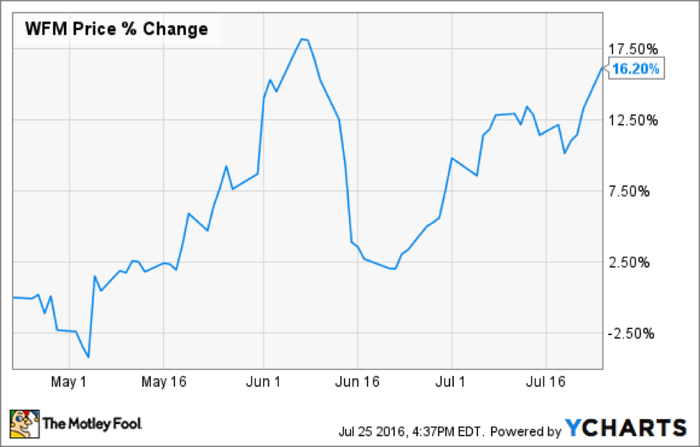 With Whole Foods reporting earnings after the close on Wednesday, July 27, investors are looking to see the company maintain its positive momentum. Fortunately for those investors, exceeding expectations shouldn't be too difficult as the bar is set so low.

When Whole Foods management initially set fiscal year 2016 guidance last November, it projected sales growth of 3% to 5%. Same-store sales were expected to improve from a 2% decline in the first quarter to roughly flat in the second and third quarters and then 3% growth by the fourth. Since setting those expectations, the company has reported two quarters of earnings and revenue up just 2.5%. While management was accurate with its comparable store expectations in the first quarter, business failed to improve the next quarter as comps actually worsened. After reporting a 1.8% decline during the first quarter, same-store sales fell 3% the next quarter. As a result, management took its annual sales growth projection down to just 3%.

Things should get better the second half of the year as the company approaches the one-year mark of a New York City Department of Consumer Affairs investigation revealed the company was overcharging customers. The company has struggled to regain customers trust after the scandal, but a lower sales base should help the company return to positive comps. While far from the ideal of reporting healthy growth, it does make for positive headlines.

Due to its premium position in the marketplace, Whole Foods enjoys margins that are the envy of the grocery industry. Despite a rough year, both its gross and operating margins were well above traditional grocers.

But while it still leads the industry in profitability, competitive pressures over the past few years have resulted in declining margins. 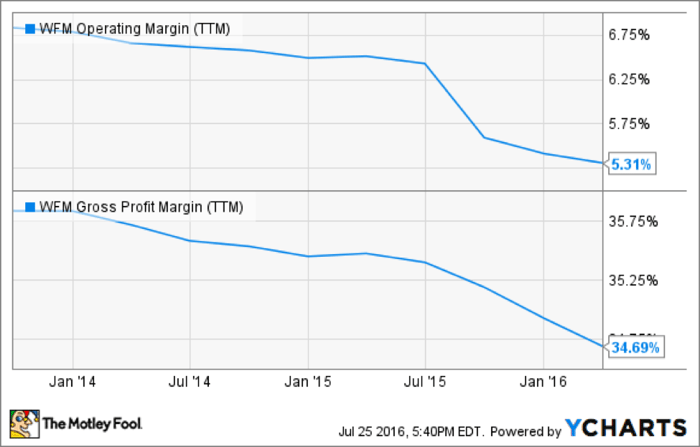 For the full year, Whole Foods management expects operating margins to come in at about 5.4%, a 70 basis point decline excluding one-time charges from fiscal year 2015. And in the second quarter, gross margins declined nearly one percentage point from the prior year. Because of increased price cuts, management expects gross margins to decline further during the remainder of the year.

For the year, Whole Foods management expects approximately 30 new stores -- this would put the total location count at around 425 stores. The company has previously pointed to an opportunity for 1,200 locations. The company is nowhere near that goal at this moment, and its pace of growth is probably not giving investors much hope that it can reach this lofty target any time soon. However, investors may have something to look forward to with its 365 locations.

On May 25, Whole Foods opened its first 365 location in the Silver Lake neighborhood of Los Angeles. The 365 concept offers shoppers a lower cost option to a traditional Whole Foods Market location. It features not only lower prices but smaller square footage, more prepared products, lower service levels, and more utilization of technology. On Wednesday, investors should be get an important glimpse into how 365 is operating financially. Although a couple months of results is not enough to call a grocery concept a success or failure, a strong grand opening may be the first signal that the company has a project that can boost growth going forward.

Given the bad publicity, negative comps, declining margins, and slowing expansion, it is no surprise Whole Foods Market stock has struggled. The fact that management has not given any indication that business is going to get better doesn't help either. However, the bar is set low at the moment. The market generally reacts to how a company fares relative to expectations. If Whole Foods Market can stop the bleeding, its stock price may just be able to continue its recent upward momentum. Long-term prospects, however, will be far less certain.