Even with recent setbacks, Under Armour is keeping up its pace of big growth. Image source: Under Armour.

On July 26, Under Armour Inc. (NYSE:UAA) (NYSE:UA) reported second-quarter financial results, announcing a 25th consecutive quarter of more than 20% revenue growth. Unfortunately, the company also reported a profits decline in the quarter, due to an impairment related to the liquidation of Sports Authority and the GAAP impact of the Class C stock dividend paid in June.

But it was far from just bad news for the high-performance athletic apparel and footwear company, which continues to invest in big growth throughout its various product categories, and all over the world. Here's a closer look at Under Armour's earnings report -- both the bad and the good.

Under Armour continues huge sales growth in key segments of its business:

Let's address the difference in earnings per share across Under Armour's three share classes. In short, Under Armour issued a new non-voting class of share in what was essentially a stock split in April of this year, awarding holders of the A shares (and CEO Kevin Plank, sole holder of the company's B shares) one C share for each A or B share held. These C shares have significantly underperformed the A shares to date: 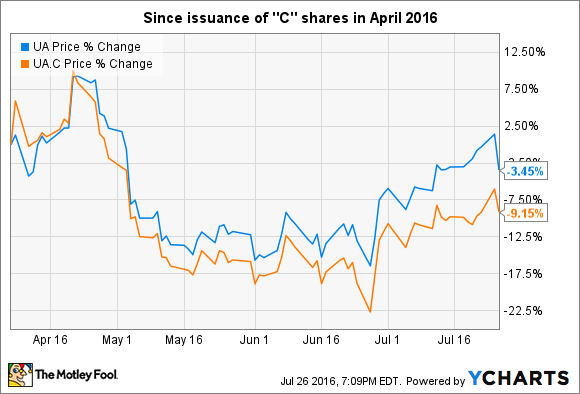 There was a lawsuit which was settled, awarding $59 million to holders of the Class C shares in June at a ratio of 0.007098 new C shares for every C share owned as of June 15, 2016. To account for this payment to Class C shareholders, the company took a $59 million adjustment and actually reported a net loss available to all shareholders of $52.7 million; this was taken after the net income of $6.3 million, and only affected the earnings per share related to Class A and B shares. Class C shares, on the other hand, show the benefit of the $59 million paid as earnings attributable to those shares.

Next, the decline in operating income and net income:

When costs accelerate, margins shrink, and there are big one-time charges, profits take a hit in the short term. But as you can see above, if these one-time events were truly one-time, the company should be able to continue effectively growing revenues and earnings while investing in growth.

Under Armour announced it would bring its apparel and footwear to Kohl's Corporation (NYSE:KSS) stores in 2017. On the earnings call, Plank said that the company would have its products available in at least 600 Kohl's stores at the start of that company's fiscal year, and would have them rolled out to all 1,100-plus Kohl's stores by year-end.

On the surface, this move may seem like a quick reaction to the loss of Sports Authority's 450-plus stores. After all, Kohl's, like many of its big-box department store peers, continues to face competitive pressure from web retailers such as Amazon.com Inc., but also from the branded bricks-and-mortar retail operations of companies such as Under Armour, which has at least partly undercut the sales of department stores. When Kohl's last reported earnings in May, revenue was down 3.7%, while earnings fell more than 80%. Even when excluding one-time costs including impairments related to store closings, profits were down by half.

But Under Armour management was clear that this partnership has been "years" in the making, and no knee-jerk reaction. Plank highlighted Kohl's "large, loyal" customer base, the majority of which are women. Factor in that Under Armour's women's products are expected to make up $1 billion of the company's $4.95 billion in sales in 2016, and there are a lot of reasons why this partnership with Kohl's is more than just a reaction to Sports Authority's failure.

Management also gave details on its plans to enter the sportswear business, saying that it would enter this $15 billion market in September. The idea here is that it wants to expand beyond its current athletic apparel and into clothing that can be worn out to dinner or in the office while still offering the performance benefits Under Armour clothing has become synonymous with.

The company is taking a high-end approach with its sportswear. Don't expect to see these products on the rack at your neighborhood sporting good store, but instead at premium retail and fashion outlets.

International growth remains a major focus, including western markets like the U.K. and huge potential markets like China, where Under Armour will open the majority of its new retail stores this year. How important is China? China has grown it from $1 million in sales in 2010 to an expected $150 million this year.

Management slightly backed down its full-year outlook, reducing revenue from $5.0 billion to $4.925 billion, and operating income of $440 million to $445 million, down from $503 million to $507 million. This slight reduction appears to almost entirely be a product of the loss of Sports Authority. But this is where steps to grow its direct sales channel, its global retail network, and continue expanding in North America with partnerships such as the one with Kohl's, are all important. Not only will they drive growth for years to come, but they will also reduce the company's reliance on any single retailer or distributor.

Management has been clear that this is a long-term plan -- running a marathon to put it in sports terms -- and will continue to invest heavily in growth where there is significant opportunity. The strategy has worked well for 20 years. Don't expect Plank and team to stop now.