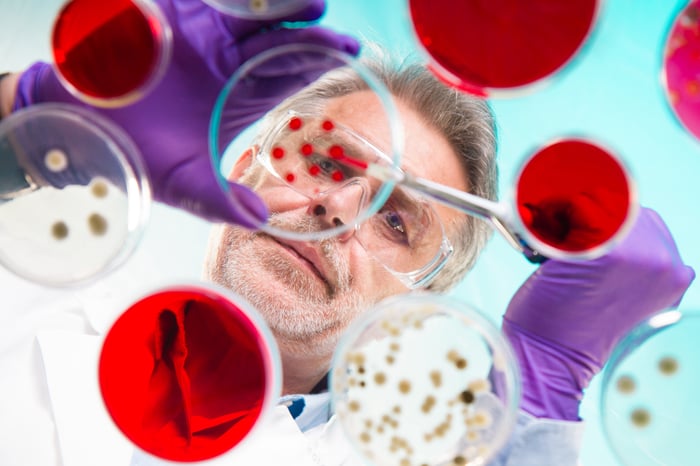 What: Shares of Seres Therapeutics (NASDAQ:MCRB), a clinical-stage biotech focused on developing microbiome technology, are collapsing today, down more than 71% as of noon EDT, on huge volume in response to the news that an important clinical study didn't go according to plan.

So what: Seres Therapeutics released interim results from its ECOSPOR study today, which was testing its lead product candidate, SER-109, as a potential treatment for the bacterium Clostridium difficile, or C. diff.

The 89-patient, placebo-controlled phase 2 study was attempting to show that using SER-109 could reduce the relative risk of C. diff infection (CDI) recurrence. Unfortunately, the company's interim data that were collected at week eight of the study showed SER-109 has failed to meet its primary objective.

These are unexpected clinical results in view of the positive data in our prior investigator-sponsored Phase 1b trial, as well as in a wide range of supporting clinical and preclinical data. Specifically, the recurrence rates observed in the overall SER-109 treatment group, in the age stratified subgroups, and in the placebo groups are inconsistent with our expectations. Our priority is to complete a full review of the clinical results and microbiome data of the Phase 2 study and to compare it to data from the prior investigator sponsored Phase 1b. Based on this information and pending discussions with the FDA, we plan to make any necessary changes to our development plans for SER-109.

Now what: SER-109 was the company's most advanced product candidate, so it's no surprise to see Seres shares getting wiped out today.

If you're looking for a silver lining here, the study hinted that SER-190 may still hold promise as a treatment for older adults. Specially, subjects who were older than 65 and used SER-190 experienced CDI recurrence in only 45% of cases, which compared favorably to the 80% recurrence observed in the placebo group. Still, that number was from a much smaller patient population, so it's possible that the result occurred purely by chance. In addition, SER-190 performed far worse with the younger patient population: SER-190 was associated with CDI recurrence in 43% of subjects under age 65, versus only 27% in the placebo group.

Seres Therapeutics' stock has put investors on a rough ride since first hitting the public markets in June 2015. Even prior to today's collapse, shares trailed the poorly performing biotech index in general, as measured by the SPDR S&P Biotech ETF (NYSEMKT:XBI). 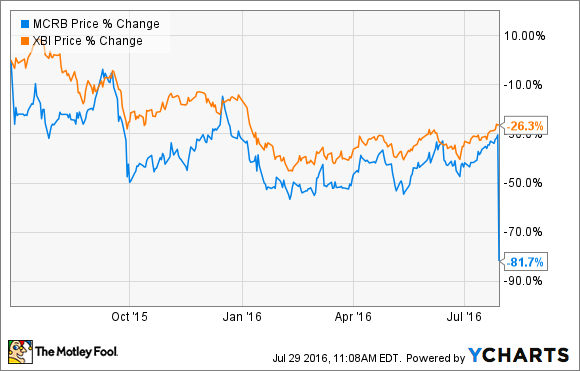 With huge questions in the air regarding this company's future, it's hard to find a reason to be bullish on the company's shares. Even though shares are much cheaper today than they were yesterday, I'd advise risk-loving investors to look elsewhere for more promising opportunities.