If you buy and hold stocks with these three traits, you can catch these fat yields, too! 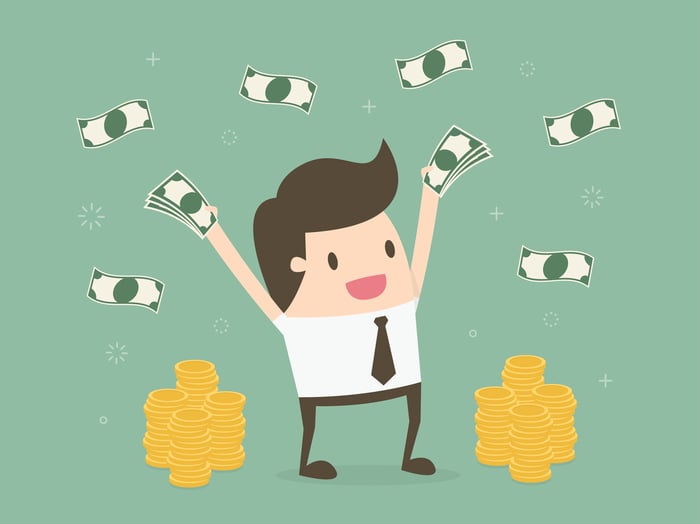 On Feb. 23, 2009, I made one of my first stock purchases, buying shares of Aflac (AFL 0.73%). The stock, like every other stock on the public markets at that time, had dropped precipitously. Investors were concerned that a large swath of Aflac's normally safe investments would end up being lost through defaults. I've held those shares ever since.

The company survived the crisis and has recently been hitting all-time highs. As of this writing, shares trade around $73 and pay a quarterly dividend of $1.64, which translates to a yield of 2.24% for those who buy today. However, because I bought at $16.50, I'm currently enjoying an effective yield of 9% per year.

This investing success story owes mostly to luck: There's no way I could have known for sure that Aflac would survive, and its dividend wasn't even foremost in my mind. But I've held those few shares -- which have returned 420% -- as a reminder: Buying companies that continually grow their dividends can rapidly grow your wealth over the years.

These stocks tend to have three key qualities:

With that in mind, here are two more stocks that could easily yield 10% or more in a few years -- if you buy them today.

The paint business might sound boring, but the returns that Sherwin-Williams (SHW -1.23%) shares have achieved are not. The company is the market-leading provider of paints, coatings, and related supplies for both retail and commercial customers. And though it only offers a 1.1% dividend yield right now, it has the potential for explosive growth going forward.

For starters, Sherwin-Williams consistently produces gobs of free cash flow, and it has only used a fraction of that cash to pay its dividend.

Over the past three years, the company has never used more than one-quarter of its free cash flow to pay its dividend. That means the dividend is not only safe if the economy turns south, but also has lots of room to grow.

Management hasn't shied away from that growth. Over the past five years, the dividend has grown from $1.46 per share to $3.36 per share today. That's an average bump of 18% per year. If you bought today and the dividend continued to grow at that rate, then your yearly yield would reach 10% in 13 years.

That might sound like a long time, but it's important to remember that there's lots of potential for the stock price to appreciate as well. The stock trades for a fair 22 times free cash flow, and the company's brand and market share provide a solid competitive moat.

A spinoff that has lots of potential

In late 2012, AbbVie (ABBV -0.36%) was spun out of Abbott Labs. The move was deemed a way to unlock the value of AbbVie's biopharmaceutical prowess. Since then, the stock has almost doubled -- but the real story is the company's dividend growth.

Like Sherwin-Williams, AbbVie currently has lots of room to grow its dividend.

Over the last 12 months, the company has used just 45% of its free cash flow on its dividend. That's especially important for a company in the biopharmaceutical industry, where companies' fortunes can swing wildly based on the FDA's approval or denial of their treatments and the nature of patents. In some cases, an FDA decision can make or break a biopharmaceutical, and when an approved drug loses its patent protection and generic versions flood the market, the company needs to produce another winner to keep the business humming along.

In 2014, AbbVie's free cash flow plunged, but that was because of an unsuccessful takeover bid and should be viewed as an anomaly. And one of the company's biggest sellers, Humira, has an additional advantage in that it is a biologic, rather than a small-molecule drug that's easily replicable.

Since AbbVie went public, its dividend has grown at $1.60 per year to $2.28, representing 13% growth per year. If you bought shares today, and the company continued growing its dividend at this rate, you'd be sitting on a 10% yielder in under a decade.

Again, that may seem like a long time, but as with Sherwin-Williams, there's also significant potential for capital growth thanks to the company's R&D pipeline.

Of course, the potential for future 10% yielders isn't limited to Sherwin-Williams or AbbVie. These are simply examples of companies that fit the bill. Buy a stock that shares those three qualities, let them compound over a decade, and you, too, could have a dynamic wealth-builder.

Brian Stoffel owns shares of Aflac. The Motley Fool recommends Aflac and Sherwin-Williams. We Fools may not all hold the same opinions, but we all believe that considering a diverse range of insights makes us better investors. The Motley Fool has a disclosure policy.

These 3 High-Dividend Stocks Have Cathie Wood's Seal of Approval

3 Ways to Become a Millionaire Making Money in Your Sleep