Buffalo Wild Wings (NASDAQ:BWLD) released earnings last week, and same-restaurant sales were down for the second quarter in a row -- top line growth is now relying on new restaurant openings alone. Should investors be worried? What will turn things around for the company?

Highlights of the report

The company's stock has jumped 20% in the last two weeks with more than half of that gain coming after the release of second quarter earnings. Investors were happy with the year-over-year revenue and earnings per share growth of 15% and 13%, respectively. 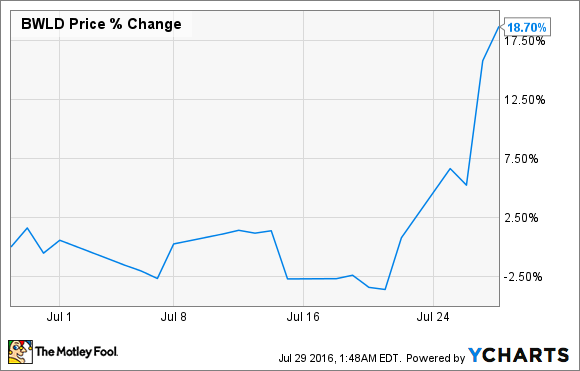 The market shrugged off what is usually a closely watched metric for the wing and beer chain: same-restaurant sales. Year-over-year, sales at company-owned locations fell 2.1%, while franchised locations fell 2.6%. This is on top of respective declines of 1.7% and 2.4% in the previous quarter.

Keep in mind that this issue stretches further back than the past six months. For over a year now, the chain has been experiencing a slowdown in this metric. After hitting sales increases of 6.5% and 5.6% for company-owned and franchised locations in 2014, same-restaurant sales have been in a steady decline ever since.

For the past six months now, Buffalo Wild Wings has been offsetting the declines at existing locations by expanding the number of new restaurant openings. The company had 93 more locations at the end of 2015 than 2014, an 8.6% increase. So far this year, the company has opened an additional 30 restaurants. Despite the underperformance at existing restaurants, new locations continue to be the primary engine driving the Buffalo Wild Wings business.

The declining sales trend is nonetheless concerning, and if it were to continue for too long, the company would obviously have a serious problem on its hands. So what is management doing to lure customers back?

Lunchtime to the rescue

Enter the recent debut of the Fast Break Lunch guarantee, where customers receive lunch for free if it's not ready in 15 minutes. The initiative launched just a few weeks ago, at the start of the third quarter. Management didn't have any numbers to share, only that it's pleased with the initial positive response. The chance to get something for free usually draws a crowd.

The company is also expanding its popular discount Wing Tuesday promotion. The company has always had this offer but decided to cut prices in half. Testing has begun at 80 restaurants.

Rounding out Buffalo Wild Wings' fight to draw in new sales is takeout and delivery. Takeout orders increased 25% year-over-year, with 16% of orders being placed on the chains digital ordering platform. Takeout has been an important addition in recent years, and the company is looking to keep refining the process to make ordering easier, more accurate, and more efficient.

An interesting new direction related to takeout is delivery. CEO Sally Smith cited a Morgan Stanley report that ranked Buffalo Wild Wings in fourth as most desired brand by consumers to offer a delivery option. Delivery has been launched at two locations to test the viability of the initiative, and management promises to have updates on the progress soon.

The popular sports hangout has zeroed in on what it will take to return same-store sales to positive: convenience and competitive pricing. The NFL season is also right around the corner. America's favorite sport always creates a lot of buzz around the bar and grub scene. With the return of football and the new B-Dubs Eats campaigns, investors can be hopeful the next quarter will show a return to growth for the same-restaurant sales metric.

Should investors be concerned over the back-to-back drop? I think it's too early to say. It looks as if management has homed in on a plan to drive sales higher, and let's not forget the new R Taco and Pizza Rev concept the company is developing. R Taco in particular is beginning to ramp up with 10 new locations expected this year.

Nevertheless, investors should keep an eye on same-restaurant sales going forward. Should the declines continue in spite of the new lunch, discount, and delivery campaigns, it'll be back to the drawing boards for management. For now at least, the company still has one growth engine still running with the new restaurant opening spree contributing to sales growth. No need to look for the exit just yet.