What: Shares of cloud backup and disaster recovery solutions provider Carbonite (NASDAQ:CARB) surged on Tuesday following the company's second-quarter report. Carbonite beat analyst estimates for both revenue and earnings by a wide margin, pushing the stock up 16% by 3:15 p.m. ET.

So what: Carbonite reported second-quarter revenue of $53.4 million, up 57% year over year and about $9 million higher than the average analyst estimate. Bookings rose 50% to $53.7 million. CEO Mohamad Ali pointed to rapid growth among small and midsize business customers:

I am very pleased with our progress, especially the expansion of our SMB business which grew approximately 150%. The EVault integration is exceeding expectations, yielding faster and better-than-expected synergies. Market demand for our expanded set of solutions is strong and growing, and I am confident in the team's ability to continue to drive results. 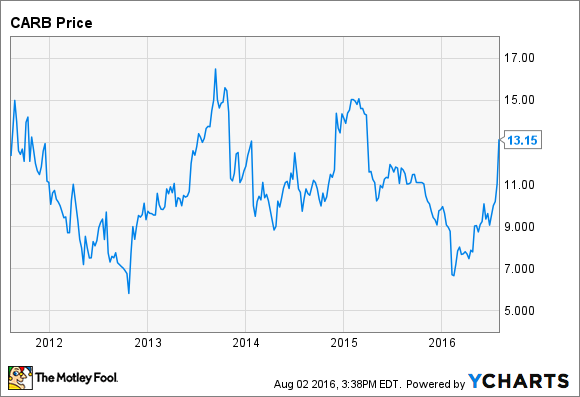 Shares of Carbonite have now doubled since bottoming out in February, but even after Tuesday's gain the stock is still a bit below levels reached in early 2015. The numbers are moving in the right direction, with company reaching GAAP profitability during the second quarter. If Carbonite can keep it up, further gains could be in the cards.