Caesars Entertainment (NASDAQ:CZR) seems to keep taking one step forward and one step back when it comes to its business and its emergence from the messy bankruptcy of a subsidiary. Operations in Las Vegas and mobile gaming are improving, which is great for operations, but that calls into question why creditors of Caesars Entertainment Operating Company (CEOC) are being asked to take less than they're owed in CEOC's bankruptcy.

The week's developments will help show why this complicated structure is just getting weirder by the day. And we may still be a long way from finalizing what Caesars Entertainment will look like in the future.

The tangled web they weave

The first thing to lay out is just how Caesars Entertainment is structured. Below, I've included the operating structure as management showed it during the second quarter earnings presentation. 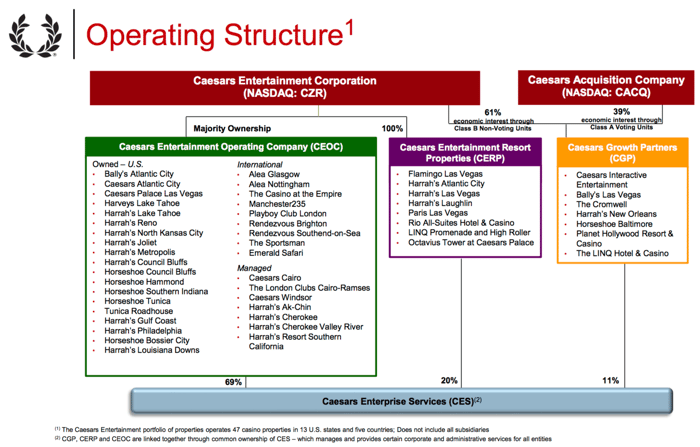 What's important to note here is that CEOC is bankrupt and Caesars Growth Partners (CGP) is 39% owned by Caesars Acquisition Company (NASDAQ: CACQ). The only wholly owned unit is Caesars Entertainment Resort Properties (CERP), which owns a mishmash of properties in Las Vegas, Atlantic City, and Laughlin.

The reason this structure is controversial is because Caesars Entertainment created this organizational structure to move assets away from CEOC, which it loaded with debt ahead of bankruptcy. I covered the ordeal here, the details of which included a court examiner saying that these moves were likely fraudulent. And that's where this week's news throws a wrinkle into the court proceedings.

How Caesars did in Q2

Regional gaming is struggling, which isn't surprising given the rapid buildout of new casinos across the country over the past decade. But Las Vegas is growing steadily, and shows no signs of slowing down in the near future.

The sale that complicates everything

On top of improving operating results, Caesars Interactive, which is part of CGP, agreed to sell an asset called Playtika for $4.4 billion in cash. As it's currently constituted, Caesars Entertainment will get about 61% of that value, with the rest going to Caesars Acquisition Company.

But here's where it gets complicated. Caesars Entertainment is negotiating a settlement with second lien note holders in CEOC, and wants to pay them 46 cents on the dollar in a restructuring. But if you're a second lien note holder and you feel that you have a claim to not only CERP but CGP as well, why settle when the latter will soon be flush with cash?

Given the improved operations and the cash value being paid for Playtika, I don't see how Caesars Entertainment doesn't either have to pay more to settle CEOC's bankruptcy or get pulled into bankruptcy itself. Hedge funds like Appaloosa Management are among the holders of those notes, and they don't have any urgency to settle.

The battle for Caesars Entertainment's future is far from over. And it may still be decided in a court room, not on the gaming floor. For investors, the situation is a mess, and in a strange turn an influx of cash and improving operations may not end up helping current shareholders after all.