So what: Caesarstone reported second-quarter revenue of $142.3 million, up 11.6% year over year and about $3 million higher than analysts were expecting. Currency had a negative impact, with revenue growing by 13.4% on a constant currency basis. Caesarstone pointed to strong double-digit sales increases in Canada and Australia as the main drivers of the company's revenue growth. U.S. sales grew at a slower 5% rate.

Non-GAAP EPS came in at $0.73, up from $0.65 during the prior-year period and $0.08 higher than analysts were expecting. Gross margin rose 80 basis points year over year to 42.1%, driven by a favorable product mix.

Caesarstone also gave an update on its search for a new CEO. Previous CEO Yos Shiran resigned in May, staying on during the search. Caesarstone now expects to appoint a new CEO by the end of September, with Shiran's last day in office set for Aug. 21.

Now what: Caesarstone posted strong results for the second quarter, and it reiterated its full-year guidance as well. The company expects to produce revenue between $550 million and $565 million and adjusted EBITDA between $138 million and $145 million. 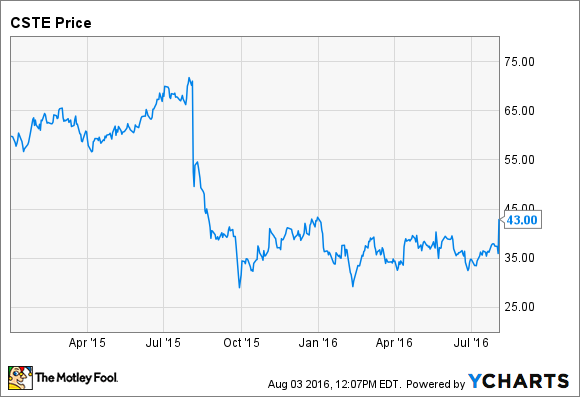 Shares of Caesarstone have been volatile since crashing late last year. With the stock rising on a strong earnings report, investors now have good reason to be more confident in the company.