Please ensure Javascript is enabled for purposes of website accessibility
Log In Help Join The Motley Fool
Free Article Join Over 1 Million Premium Members And Get More In-Depth Stock Guidance and Research
By Demitri Kalogeropoulos - Updated May 9, 2018 at 9:15AM

Quartz surface manufacturer Caesarstone (CSTE 1.53%) announced first-quarter earnings results this week that were marked by significant challenges on both its top and bottom lines. Sales growth slowed to a halt and profitability collapsed as the company struggled to efficiently produce and distribute its products. The issues led management to lower its full-year outlook while suspending its recently instituted dividend.

More on that falling 2018 outlook in a moment. First, here's how the latest results stacked up against the prior-year period:

After accelerating last quarter, sales gains hit a wall, with each of the company's three biggest markets reporting flat results or modest declines. That growth challenge was coupled with major manufacturing and distribution problems that sent gross profit margin plummeting. 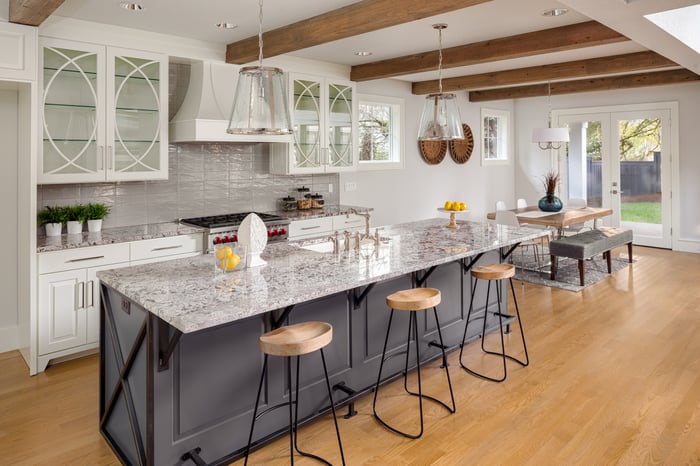 Executives weren't satisfied with their performance. "Our first-quarter results fell short of our expectations," interim CEO Yair Averbuch said in a press release. "We are working with urgency and purpose to improve execution and resume growth."

That recovery plan involves a focus on returning to sales and profitability gains in the core U.S. market, management said. As for the manufacturing and distribution challenges that hurt results this quarter, the company said these problems have been addressed and shouldn't impact future quarters.

Caesarstone lowered its 2018 outlook on both the top and bottom lines. Executives now see sales coming in between $590 million and $610 million, down from the prior target of $612 million to $632 million. At the midpoint of the updated guidance range, the forecast implies just a 2% uptick from 2017's results.

Adjusted earnings should now land between $74 million and $82 million, which would mark a significant drop from last year's $100 million profit.

Finally, management stated that it would not be paying a dividend in the second quarter. Back in February, executives instituted what they described as a recurring dividend policy that, at between $0.10 per share and $0.15 per share, wouldn't threaten funding for Caesarstone's capital needs. The recent growth and profitability challenges changed that calculation, though, so management has decided to preserve its cash for internal use.

Caesarstone Ltd. Stock Down 31%: Here's What You Should Know