Cypress Semiconductor (NASDAQ:CY) has made two acquisitions and a divesture in the last year to boost sales and to take advantage of cost-saving synergies. With smartphone and tablet sales slowing, should other semiconductor companies take a cue from Cypress and get busy with mergers and acquisitions?

The state of the semiconductor industry

Over the last two years, the semiconductor industry has had nice gains. Starting in summer of 2015, though, it has endured a roller coaster of volatility and is now flat to slightly up since. Here is a look at the fluctuations, illustrated by the SPDR S&P Semiconductor ETF. 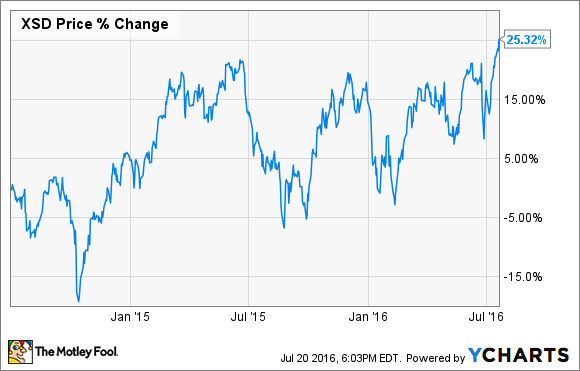 What was the cause for the industry's stomach-churning performance? Global demand for semiconductors fell 2.3% last year, and the forecast for 2016 is another drop of 0.6%. The trend has been driven by declining demand for PCs and tablets, and a slowdown in demand for smartphones, categories which led the industry higher in the last decade.

While IoT is expected to drive growth in the tech industry in the future, it is still in the early stages. Growth from connected devices ranging from watches to automobiles has not yet been enough to offset declines in what was the semiconductor industry's bread and butter.

In response to the difficult environment, semiconductor businesses got busy. 2015 wasa record year for mergers and acquisitions in the industry, with total values topping $120 billion. The trend is continuing this year in response to the persistent slowdown in tech device sales.

Smaller chip and component suppliers are especially feeling the hurt, but continued M&A could be the solution. Cypress Semiconductors' most recent activity could be a blueprint for others to follow.

M&A nonsense or a silver bullet

Cypress completed an acquisition and a divesture in 2015, and just completed another acquisition for 2016. Each deal fills a key need during this period of transition for the industry: one in cost-cutting and consolidation, and the other in setting up for future growth.

In March 2015, the company purchased rival microcontroller and digital-memory maker Spansion in a deal worth $5 billion. Besides creating the No. 3 global supplier of memory and microcontrollers, the acquisition also led to annual cost savings. At last report, it helped Cypress achieve $150 million in annualized synergies, which is a big deal for a company that had revenue totaling $1.6 billion in 2015.

Rounding out Cypress' cost-cutting initiatives was last year's sale of the TrueTouch Mobile touchscreen business to Parade Technologies for $100 million. As a result, Cypress lost out on $90 million in revenue from the unit during 2015, but profits derived from TrueTouch were coming in lower than the company had wanted. Axing the unit will end up increasing profit margin going forward.

Finally, earlier this month, Cypress announced the purchase of Broadcom's IoT business. The $550 million buyout makes Cypress a leader in the small but emergent IoT market. The company is the only semiconductor player toting microcontroller, memory, Wi-Fi and Bluetooth, and power management circuits for connected devices.

More than just generate noise on the M&A front, Cypress just accomplished two things. It first consolidated its older division that relied on PC, tablet, and smartphone sales, taking over a key competitor and squeezing extra profit margin out of a slowing technology sector. Second, it strengthened its position in a key growth area, the Internet of Things.

The cutting-edge technology of the previous decade, smartphones and tablets, is reaching a saturation point. Consumers in developing markets are still acquiring these devices for the first time, but users in developed markets are making new and update purchases much more slowly.

New device purchases are quickly headed toward IoT.  A 30% increase in connected "things" is expected in 2016 with nearly 6.4 billion devices in use. That number is expected to more than triple to over 20 billion by 2020.

While still paying attention to its bulk business, Cypress has set itself up to take advantage of the coming wave of demand. In line with the bigger-picture trend, the company's two smallest units, the data communications division and emerging technologies division, saw 15% and 20% quarter-over-quarter growth, respectively, at last report.

I think that other players in the semiconductor industry should and will continue with the strong M&A activity in an attempt to bridge this transition period. Investors should take note and stock up on companies that are setting themselves up for the next decade of technological growth.