Strong demand for Toyota crossovers like the RAV4 wasn't enough to offset the impact of a strengthening yen. Image source: Toyota Motor Corporation.

Like many Japanese companies, Toyota starts its fiscal year on April 1. The quarter that ended on June 30 was the first quarter of Toyota's fiscal 2017. All financial numbers shown are in millions of yen.

Toyota used the exchange rates shown in the chart for accounting purposes. As of August 4, 1 U.S. dollar = about 101 Japanese yen.

Exchange-rate shifts had a big impact on Toyota's bottom line

Toyota said the biggest factor in its 15% decline in operating profit was unfavorable exchange-rate shifts, which hurt earnings by 235 billion yen ($2.32 billion) versus the year-ago quarter. A year ago, every dollar Toyota earned in the U.S. was worth 121 yen at home in Japan, but that fell to an average 108 yen per dollar in the quarter, an 11% unfavorable swing. 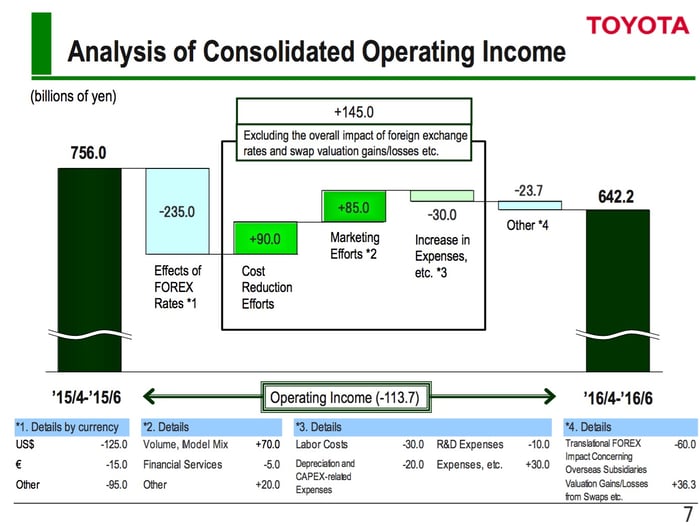 As the above slide from Toyota's earnings presentation shows, Toyota was able to offset the exchange-rate hit to some extent. CEO Akio Toyoda's ongoing cost-reduction efforts helped, as did a modest 2.7% year-over-year increase in vehicles sold along with improvements to "mix," the ratio of more-profitable vehicles to less-profitable ones.

Toyota's operating income in its home market of Japan fell 39% to 290.1 billion yen ($2.87 billion), despite an 8.7% year-over-year increase in sales. Toyota attributed the drop to rising expenses and those exchange-rate shifts. Its operating income margin in the region fell to 8.6% from 13.6% a year ago.

It may sound strange that Toyota's home-market results were impacted by exchange rates. But unlike rivals such as Honda (NYSE:HMC), which have shifted much of their production overseas, Toyota still makes a substantial number of vehicles in Japan for export to world markets, including the United States.

The story was reversed in North America, where Toyota's operating income rose 9.4% to 165.4 billion yen ($1.64 billion) despite a 2% year-over-year decline in vehicles sold. Its operating margin improved to 6.5% from 5.3% a year ago. Toyota attributed the profit gain to its cost-reduction efforts.

Toyota's 6.5% operating margin in North America might sound low -- and it is, when compared to General Motors' (NYSE:GM) 12.1% margin and Ford's (NYSE:F) 11.3% margin in North America over the same period. The Detroit automakers sell a much more profitable mix of products in their home market, where high-profit-margin trucks and SUVs are in high demand.

Toyota's product portfolio is still weighted far more heavily toward sedans and smaller vehicles that emphasize fuel efficiency, which are less popular with U.S. buyers at the moment. The decline in gasoline prices hasn't helped all automakers to the same extent.

In Europe, Toyota's operating income fell 17% to 8.5 billion yen ($84.1 million) despite a 7.8% gain in sales, with an operating profit margin of just 1.4%. Exchange rates were the culprit again -- this time the depreciation of the British pound and Russian ruble against the yen.

In Asia (outside of Japan, but including China), operating income rose 22% to 124.6 billion yen ($1.23 billion) on a 17% jump in sales. Expenses in the region rose, Toyota said, but its cost reduction and that big jump in sales more than made up for it.

In Toyota's rest-of-the-world unit, including Central and South America, Oceania, Africa, and the Middle East, operating income fell 18.6% to 28.1 billion yen ($277.8 million) as sales fell 10.8%. Toyota said the profitability of its imports was "undermined" by "weaker lower currencies and an increase in expenses."

Toyota's Financial Services unit earned 81.6 billion yen ($807 million), down 15.7% from a year ago. It attributed the drop to exchange-rate shifts and "residual value losses." Because the value of used sedans has fallen as crossover SUVs have become more popular, the sedans Toyota gets back when leases end are worth less when they're sold at auction.