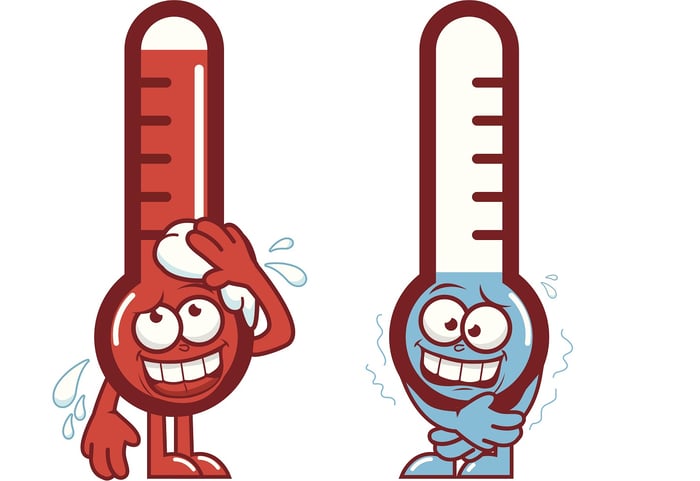 Some companies have a better view of the world around them than others, sharing what they see to investors in their quarterly conference calls.

In this edition of Hot or Not, we'll look at the health of the financial industry through the lens of SVB Finanical (NASDAQ:SIVB), which is the banker to Silicon Valley's technology boom, and Blackstone Group (NYSE:BX), a company that invests in....well, just about everything for itself and its clients.

What's hot and what's not?

In addition to Blackstone's traditional institutional real estate investments, the company was one of the largest buyers of single-family homes coming out of the financial crisis. What's Blackstone's view on the state of American housing?

Blackstone's President and Chief Operating Officer, Tony James, had this to say:

We continue to be very optimistic about where home prices are in the cycle. I don't even think we are in mid-cycle yet, so I think there is a -- in terms of homebuilding and general activities -- prices have come up a lot. As a result, we are still buying some homes but it's harder to buy in the volume that we once did and so it's becoming a more mature investment in terms of rate of growth.

Not even mid-cycle? That says a lot.

He later added that "There's more building in multifamily for example than in terms of where it feels like you are in cycle than in single family homes," further cementing his thesis that residential real estate, particularly single-family homes, should continue to appreciate because of supply constraints.

James noted that Blackstone is still acquiring properties of all types below replacement cost, but no longer at the 40% to 50% discounts to replacement costs it was paying just 5 years ago.

Hedge funds have had a challenging time winning customers as public markets have largely gone sideways this year. For the first half of 2016, hedge funds collectively lost about $28 billion of customer assets to outflows (withdrawals).

Blackstone CFO Michael Chae had this to say:

I don't think we see a collapse in the hedge fund industry at all, but what we're seeing is a lot of turmoil in there. And when the turmoil is moving, assets are moving from one form of manager to another form of manager. Frankly we expect to see assets moved from human managers to machine managers. We also expect to see assets moving from high fee managers to lower fee managers or lower fee vehicles.

He really knocked it out of the park later, noting that fees stand out like a sore thumb when markets are flat.

Venture capital is becoming a story of the haves vs. the have nots. Data from Pitchbook suggests that so-called "unicorns," companies with valuations in excess of $1 billion, received 30% of VC funding in the first half of 2016.

In his prepared remarks, SVB Financial President & CEO, Greg Becker noted that "Dollar figures were dominated by a small number of very large rounds to late-stage private companies. At the same time, funding to early stage start-ups declined as investors opted to put their money where they perceive momentum and staying power."

The company's CFO, Michael Descheneaux, pointed out that smaller companies are often raising less money than they expected. "What we're seeing is where maybe a Series B round was going to get $20 million to $25 million of round, that's down to $15 million to $20 million."

Where venture capital is taking a step back, and hedge funds are putting up generally poor performance in flat markets, private equity funds are increasingly raising boatloads of cash.

Like a free timeshare for a weekend, the price of attending a Blackstone conference call is the sales pitch.

Steve Schwarzman is no stranger to making big statements about the value of Blackstone, a company he built over the last 31 years. Last October, he suggested that its shares should trade for $85 in 10 years, in addition to $25 to $30 per share in dividends he expected over the period.

Schwarzman revealed his new pitch for the stock this quarter, suggesting that if the S&P 500 dividend yield is just 2%, then investors should value Blackstone's fee-related earnings at the same rate. Thus, with his expectation of about $1 per share in fee-related earnings next year, Blackstone shares should be worth as much as $50, placing no value on more volatile earnings like realized gains and losses on its investments.

The market, however, isn't convinced. Shares trade for around $26 each at the time of writing, roughly half of Schwarzman's new valuation of the company.