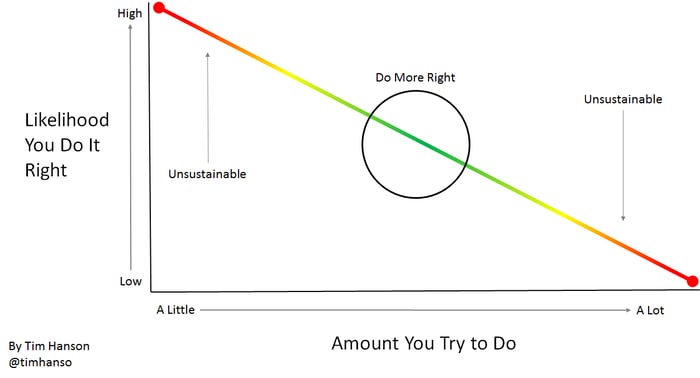 I was recently part of a job interview process that came down to two well-qualified candidates. In the final debrief, the choice was summarized as follows:

It's a subtle but important difference -- the difference between accomplishing a lot but leaving some mess in your wake, and accomplishing less but tying up all the loose ends. The debate around which trait we preferred was interesting, but ultimately, both candidates received offers, because both of these approaches need to be part of any process in order for an organization to get more things done -- the right way.

What's interesting is that we needed both people. That's because in the worlds of business and investing, these antagonistic forces need to be synthesized at the group level, rather than the individual level. Here, feedback loops are slow and vague, making it difficult for an individual to learn how to do more things the right way. Individuals learn far better when feedback is fast and painfully clear.

Here's an example of what I mean. My 5-year-old son is currently learning how to skateboard. When he first started at the age of three, "skateboarding" meant holding my hand while he stepped on the board, then balancing as he rolled down a gentle slope into soft grass.

Skateboarding, of course, gets harder from there. After my son mastered the skill of rolling down a slight grade while holding my hand, he wanted to do more. He wanted to turn. Then slalom. Then propel himself. Then go down bigger hills. Then jump on things. Then jump over things.

While he was content to spend a whole month just rolling down a tiny hill, after that he suddenly felt confident enough to learn all of those new skills at once. This is overconfidence -- when someone extrapolates their competence in a single task into competence in many other, more complex tasks. Here he's doing the right things, but he's not doing the things right.

However, overconfidence is the best teaching tool there is. It leads to boundary-stretching, which leads to failure, then learning and iterating, and then finally mastery. Expertise grows from overconfidence.

What's great about skateboarding is how tangible the whole process is. The feedback loop is obvious: I fell, it hurts, I need to try something different. 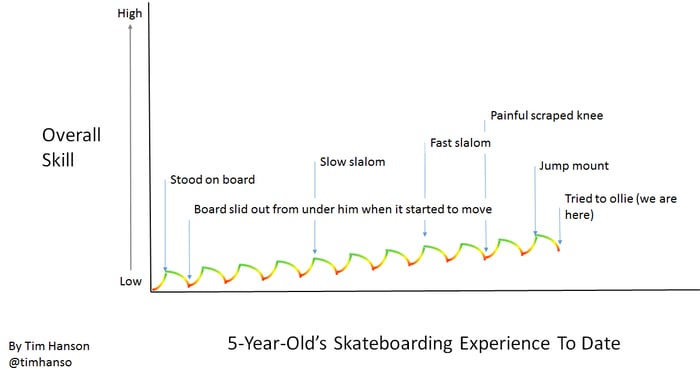 What's more, success is just as obvious as failure -- I didn't fall, I landed the jump, that was fun. All of this is to say that I'm excited for the day my son discovers there is a half-pipe just a few miles from our house. He is going to learn a lot.

Wrong for the right reasons

But again, this obvious feedback loop does not exist in the worlds of business and investing. Some years ago, I had conversation about process with fund manager Ron Muhlenkamp. Ron, at the time, ran a high-performing fund. His fund has since suffered through a period of underperformance, which just goes to show that someone who knows the importance of process can still meet with unfavorable outcomes.

Ron is a value investor, which means he likes to buy stocks that are selling for less than they're worth because of some temporary impairment in the eyes of the market. But the rub with value investing is that a temporary market impairment can stay in effect for quite a long time. What Ron explained is that a lot of value investors, when they're not doing well, prefer to explain away underperformance by claiming that they were early, not wrong. In other words, what they're seeing is correct; it's the market that hasn't wised up yet. This is an example of being wrong for the right reasons, and you can see it in Bill Ackman's stance on Herbalife, Bruce Berkowitz's call on The St. Joe Co., and probably even Warren Buffett's faith in IBM.

But Ron was adamant. "Early is wrong," he said. "It's overconfidence."

The market is smart. If it's telling you you're wrong, then you should recognize that.

That's relevant here because it shows how even the most well-regarded professional investors have development curves that parallel my 5-year-old's development as a skateboarder. It's confident growth followed by overconfident decline, with a slow progression up and to the right toward expertise.

Right for the wrong reasons

Similarly, it's possible in this business for mistakes to look like successes. In 2005, I bought shares of a small company called U.S. Lime & Mineral, which supplied ingredients for concrete. My thesis was that construction activity in the U.S. would continue to grow apace. In reality, we were on the verge of a huge housing bust, but I lucked out when the company discovered a natural gas reserve on one of its properties.

Similarly, I purchased Wendy's, believing it had an unappreciated asset in a little-known restaurant concept that was about to take the U.S. by storm -- no, not Tim Hortons, but Baja Fresh. Remember Baja Fresh? I thought the salsa bar was a key differentiator. But as we now know, Baja Fresh got eviscerated by Chipotle. Yet I made money, because Tim Hortons, another little-known restaurant concept owned by Wendy's, ended up taking off.

If you go back in time and look only at results, it would look like I had stable, steady development. If you looked at my process, on the other hand, I had a much bumpier development curve. It's important to recognize that, because an investor can't make a career out of hit-or-miss research. It's important to get better -- to do more right -- even if you're getting lucky on the returns side. And that's where a group dynamic can be helpful.

To go back to the original paradigm of this article, one can either do more of the right things or do everything right. For investors, this manifests itself in the tension between the need to crank out more investing ideas and the undeniable benefits of inaction. I've written about the merits of doing nothing and of finding as many good, different ideas as possible -- but these seemingly antagonistic practices can work together.

In order for a great investing process -- or any process -- to work, one must bring together a team of individuals. The individuals should be focused on high idea frequency, on action, on looking at and presenting as many ideas as practicable to the team. The team, however, should act as a brake, biased against doing anything. The team should remain skeptical of new ideas, raise questions, ask for more granularity, and put a heavy burden of proof on the individual.

As for how this situation resolves itself, the answer is that it doesn't. There is no voting and no consensus. Instead, the individual needs to move ahead with his or her decision when appropriate, acknowledging that whether he or she ends up being right or wrong, he or she is accountable to those peers. In other words, the individual better be comfortable with the answer to any question raised by the team.

For this structure to work, though, the individuals on the team must trust one another. And how they end up trusting one another -- whether through third-party accreditation, time spent working together, or shared belief in the process -- is up to the team leader. But trust is critical so fast-movers don't resent being made more deliberate, and more deliberate actors don't resent being sped up. The sweet spot, of course, is when the team pulls the individual just out of their comfort zone and helps them do more right.

The key, though, is trust, and the difficulty is that trust doesn't easily scale. Scale erodes trust, and building trust slows scale. This is a paradox: To do more right, you have to already be doing more right. And unless you're skateboarding, where you'll eventually figure it out (provided you have a helmet), it's tricky stuff.