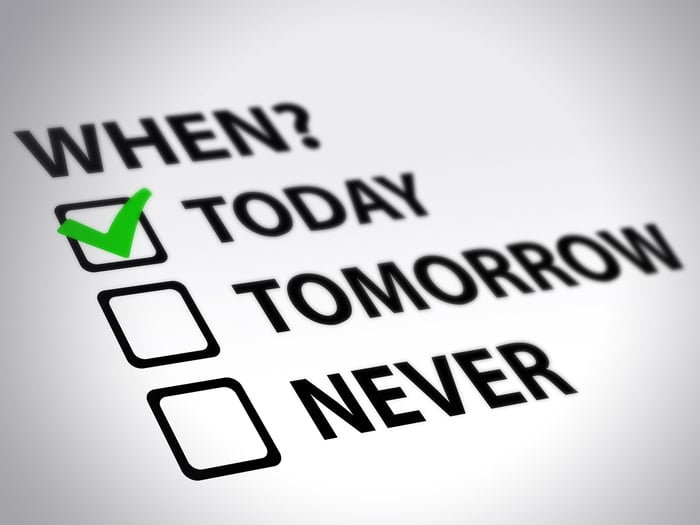 Warren Buffett has said that the key to bank stock investing is to put your money into well-managed and fairly priced banks. It's too risky to wager your investment capital on banks with shaky track records and unproven leadership. Investors should avoid those high risk bets and instead focus on high-quality institutions with reasonable valuations.

In that context, I think that Cathay General Bancorp (NASDAQ:CATY), Wells Fargo (NYSE:WFC), and Huntington Bancshares (NASDAQ:HBAN) are three quality banks that value investors should consider buying at today's prices.

Cathay General Bancorp is a Los Angeles-based regional bank primarily serving the financial needs of the Asian-American community in California, and select metropolitan markets across the U.S., and in Hong Kong, Taipei, and Shanghai. The bank was founded in 1962 and has since grown to $13.5 billion in total assets as of the second quarter.

Financially, the bank's profile looks solid. Its asset growth has accelerated over the past 10 years, increasing over 75% since 2006. Since 2009, its stock is up 295%. Its returns on assets have rebounded from the financial crisis to levels at the top of the industry. The bank's book of bad loans and foreclosures, its non-performing assets, continues to shrink, dropping 11.5% in just the past year. 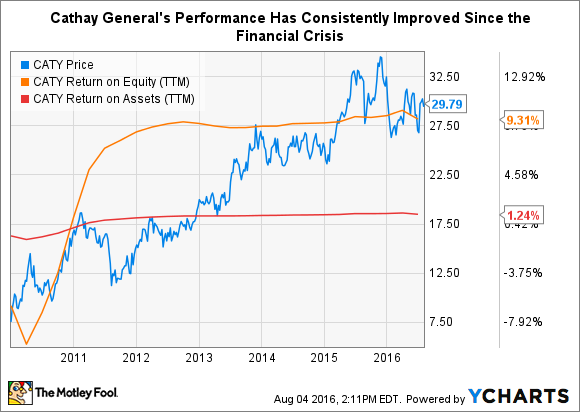 Over the last 12 months, however, the bank's stock is down around 7% at the time of writing. Its price-to-book-value ratio, a common metric for evaluating bank stock valuations, has fallen over 16% over the same period. In my view, this drop is a value investor's opportunity to pounce.

Most of the damage came in late 2015 and into early 2016 as the market reacted to concerns that the Chinese economy may not be growing as robustly as it has in the past. In the panic, the market punished Cathay General because of the bank's close ties with Chinese business interests in the U.S. and Asia.

The economic concerns that drove that volatility have yet to materialize, and there is no reflection of any related problems on Cathay General's financial statements, either. In other words, Cathay General's stock price is down not due to any meaningful decline in its intrinsic value. That's a good sign of a buying opportunity.

Similarly to Cathay General, Wells Fargo is a well-run bank that hasn't been able to catch a break this year. Its stock is down about 15% over the last 12 months, despite Wells' continued high performance in terms of returns on equity and returns on assets. On a trailing-12-month basis, the bank's return on equity is 13%, and its return on assets is 1.24% -- both among the highest in the industry.

Looking at the bank's financial statements, there's no obvious reason for this decline. Net income, revenue, and growth have all been either fairly level or improving over the past year. 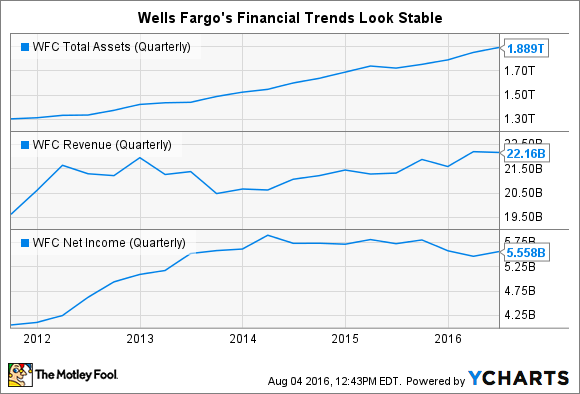 Instead, the market may be reacting to more general concerns about the global economy, the British vote to exit the European Union, and other macroeconomic factors. Those externalities don't change the fact that Wells Fargo is one of the strongest banks in the world, a fact that value investors should keep in mind with the stock trading at these prices.

Finally, there is Huntington Bancshares. Huntington's stock is the worst performer of the three stocks here, dropping 19.9% over the past year.

The largest driver behind Huntington's tough year is the bank's deal to purchase FirstMerit (NASDAQ:FMER) for $3.4 billion in cash and stock.

The deal makes strategic sense for Huntington by solidifying its footprint in the Midwest, but some worry that the bank is paying too much. When the deal was announced, Huntington's offer valued FirstMerit at a 34% premium over its stock price.

Making matters worse, the cash and stock structure is such that existing Huntington shareholders will suffer an immediate 12% dilution in tangible book value when the deal closes. The market reacted quickly, as seen in this chart. 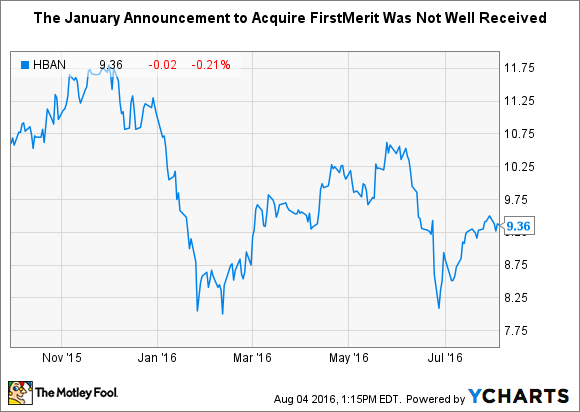 Huntington's financial performance, it should be noted, has been strong of late, with return on equity at 10.8% on a trailing-12-month basis, and annual net income and revenue increasing 50% and 89%, repsectively, over the past 10 years.

While a large bank merger is always a risky proposition, I think the market may be reacting too negatively to this deal. Both franchises already have overlapping geographies and similar books of business, although Huntington is a much larger institution. That familiarity with the people, industries, and risk profile of the Ohio and Michigan markets should help the bank mitigate many acquisition risks, while still taking advantage of the synergies and strategic advantages the deal provides.

And with a price to book value of just 1.15, I think Huntington Bancshares' stock could be worth the risk.