It wasn't a great quarter for investors in Pandora Media (NYSE:P), with revenue growth slumping to 20% over the year-ago period -- near it's lowest since going public -- and the company revising its guidance to reflect a weaker second half.

Shares have been resilient in the face of the smaller numbers, however, rising some 8% in the week following earnings. Some of that bounce may reflect the interest from Liberty Media boss Greg Maffei, who reportedly made an offer of $15 a share for the company.

But Pandora execs also hinted that the company is in better shape than its quarterly numbers might indicate, and that its short-term results are suffering so that its long-term strategy might succeed. In a nutshell, while it acknowledged "softness" in national advertising, it's also telling investors that it has left some revenue on the table by choice as it revs up plans to launch a new on-demand subscription service.

"So our strategy in front of us it to offer this broader product, and we want to have our audience as large as possible when we hit that and bring that to market," CEO Tim Westergren told analysts. "So we are trying to balance this monetization efficiency with maximum retention and engagement."

As investors, we should approach this kind of explanation with a dose of healthy skepticism. But we also should be careful not to dismiss it, either, especially when it comes from a company in a state of transition, like Pandora.

Up against the competition

A look at Pandora's revenue growth over its time as a publicly traded company isn't exactly inspiring. 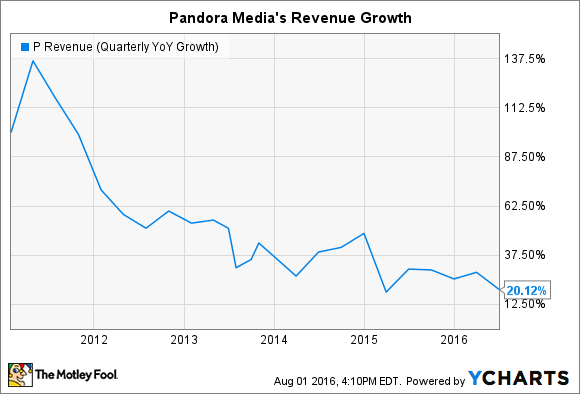 That's a pretty sharp tumble from 2012 to 2013, and Pandora has never really recovered its growth mojo. That's troubling for a company that makes 77% of its revenue from digital advertising.

It should be noted here that Pandora says its free, ad-based streaming service would be profitable if it were operating on its own and the company wasn't continuing to invest in new services.

But the digital ad space is becoming increasingly dominated by just a few large players, most notably Facebook and Alphabet, which together control more than half of the overall digital ad market and, by some estimates, a whopping 85% of all the new money coming to the digital ad space.

That's one of the reasons it has made sense for Pandora to explore its viability as a subscription-based service.

Tuning into a new business model

Pandora plans to launch an on-demand music service, offering listeners the ability to choose what songs they want to hear as they want to hear them. If it succeeds in growing that service, it has the potential to deliver the company steady subscription revenue, strengthening a business that now relies on advertising for more than three-quarters of the money it generates.

It certainly won't be any easy transition. The subscription-based streaming market is hotly competitive, from the 30-million subscriber Spotify to services from tech giants Apple and Alphabet, which both offer free and paid streaming services. And Pandora's early foray into subscriptions -- it offers ad-free streaming, but not on-demand listening -- have pretty much flopped, It's netted just 3.9 million users, a number that hasn't risen over the past year.

But Pandora believes it can succeed with on-demand. It may be the best-recognized name in streaming; it has more than 77 million regular listeners, and it has an existing platform that generates some $343 million a quarter in revenue.

To position itself for that launch, Pandora wants to grow its listeners and keep them spending as much time as possible tuned into its channels. That means giving them the best experience it can. Flooding them with ads on the free service would only cause them to tune out.

Last quarter, listener hours were up almost 7% over last year, even as the number of active listeners on the free service fell by more than a percent.

Is the shift worth the risk?

Pandora execs didn't say how much money they believe the company is leaving on the table.

The bigger question, from a long-term perspective, is whether Pandora is better off pursuing the subscription on-demand music service strategy, or recognizing that it has a profitable ad-based free service that many listeners enjoy, even if that would leave it as a slower-growing business.

If the company can grow its subscription service to scale and turn it into a profitable business, no one will be complaining about leaving money on the table years from now. But if Pandora fails to differentiate itself enough in an on-demand market that's growing increasingly crowded, neglecting its advertising opportunities will look like a critical misstep.