A quick glance at the landscape of auto manufacturers might have investors scratching their heads. Tesla (NASDAQ:TSLA), a Wall Street darling and disruptive competitor, badly lags behind the legacy auto manufacturers in a key industry metric: inventory turnover.

This figure is especially important given that Tesla is about to begin what amounts to a coup in the auto manufacturing industry, leaving analysts and industry experts alike skeptical of the company's ability to achieve its monumental manufacturing goal. 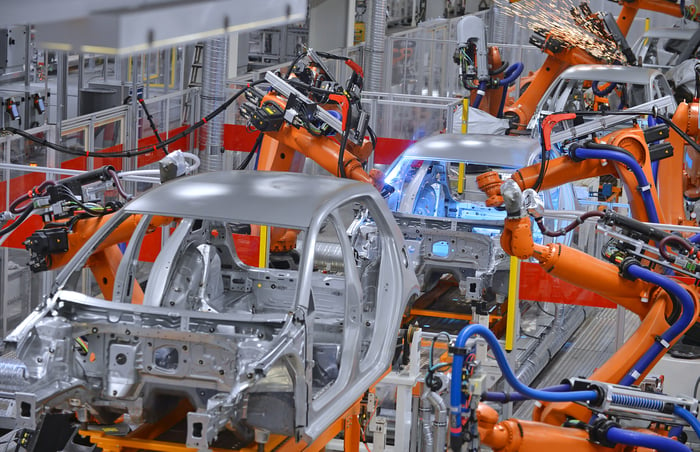 Why does inventory turnover matter?

Inventory turnover is a metric used to measure a company's ability to turn its raw materials into cash. It is a measure of the number of times inventory is sold in a given time period. To calculate inventory turnover, you can divide net sales or cost of goods sold by inventory, the table above shows this stated based on the latter. This gives the number of turnovers, or stock turns.

Manufacturers will aim for a high number of stock turns because in the business of making things, low stock turns can mean overstocking and inefficiencies.

For example, if it should take four weeks to make a car, but if your equipment keeps breaking down and it takes you six weeks, this will lower your inventory turnover. Similarly, if you accidentally order twice the number of steering wheels you need, they will sit on the shelf in storage, increasing the cost of inventory and bringing down average stock turns.

In other industries, high stock turns for manufacturers can reduce the holding cost per item and improve margins, which flows down to the company's bottom line.

As Tesla ramps up production, the company's inventory turnover might give already anxious investors a pause for thought, but this metric gives us a narrow glimpse of the manufacturing environment at Tesla.

Figures such as they always need context. Tesla battles a few unique factors that might excuse -- or at least explain -- this industry-trailing metric.

Too young to yell at?

Lower stock turns generally accompany a challenging manufacturing process or environment. A great example of this is Yaskawa Electric Corp, which makes a variety of manufacturing equipment, including very complex "Motoman" robots. The Yaskawa TTM stock turn figure is 3.4. Tesla's electric vehicles are not nearly as complex as some bespoke robots, but Tesla's products are very young, and the infancy of the manufacturing process adds complexity.

During the company's Q1 2016 earnings call in May, Elon Musk excitedly commented: "Friday, at 3am, [Tesla] achieved [the] first flawless production of a Model X, where it went through the whole production process and had zero issues." This comment is telling. New production runs are extremely challenging -- they often have a trial-and-error nature that results in reworking and wasted time and parts, which undoubtedly depresses stock turns. From this comment, it is clear that Tesla only recently optimized Model X production.

Don't look to the Model X

Tesla memorably blamed manufacturing delays with the Model X on "hubris adding far too much new technology" to its designs. The compulsion to improve the spec made for a complex design, requiring a huge variety of parts and difficult engineering. Because of this, Musk has been keen to dissuade commentators from speculating on manufacturing issues for the Model 3 based on the Model X experience.

Of course, other auto manufacturers have new products that also have all the accompanying teething problems of new production, but they manage to maintain a much more attractive stock turn figure. This is because they have a much wider and more numerous product range over which to spread the cost. Ford, for example, which had a staggering 13 stock turns in 2015, has around 30 full-scale offerings compared to Tesla's two (soon to be three).

Down side of DIY

Tesla is also separated from the pack by the fact that it manufactures a significant portion of its own parts. It has the capability to produce 95% of the component parts for the Model 3 in-house, while the average in the industry is below 50%. This affords it greater flexibility, more bargaining power with suppliers, and unrestricted design capabilities. In order to do this, Tesla has to maintain a wide variety of equipment and huge stores of raw materials. While this model has its benefits, it also has the potential to substantially increase overhead and decrease stock turns.

The necessity for high amounts of raw materials -- some of which are commodities that are frequently subject to price fluctuations or supply constraints (such as aluminum and copper) -- means that a stock-safety buffer is prudent to avoid shortages or price spikes. Traditionally, auto manufacturers would rely on just-in-time and "lean" philosophies, where (in an ideal scenario) the steering wheel arrives from the supplier just before you need to fit it.

The self-reliance of Tesla's operation means that it cannot flow down much of this responsibility to suppliers. Stock turns may be low because of the holding of a high amount of raw material, which makes sense given the commodity-based nature of the parts and the company's anticipated ramp up.

Scaling up or messing up

The anticipated scale of Tesla's production, depending on when preparations began, could go a long way to explain that low stock turn figure.

In 2015, Tesla delivered 50,580 vehicles, with more than its fair share of hiccups along the way. By 2018, CEO Elon Musk plans to increase annual production tenfold. If Tesla can pull this off, the rulebook on auto manufacturing might just need a long-overdue update.

This break-neck acceleration in production is driven by the reception of the Model 3. In just the first week of taking $1,000 deposits for the $35,000 vehicle, Tesla received 325,000 reservations. Reservations have since swelled to almost 400,000, leaving many players in the industry envious.

Anticipating anything close to a tenfold increase in less than two years makes increasing stores of raw material and parts sensible.

As the company's production matures, I would expect to see inventory track down, or at least stabilize. The yo-yoing and disproportionate nature of the inventory holdings suggest issues in their process. The small projected increase for this year might mean that focus has been given to smooth-lining operations and perhaps greater reliance on the supply chain. Just because Tesla can manufacture 95% of Model 3 components doesn't mean that it will.

Inventory turnover is just one of many metrics we can use to better understand Tesla's business. However, it does offer insight into the manufacturing climate of the company.

The current inventory turnover figure speaks to the relatively immature and untested nature of Tesla's manufacturing. As Tesla grows away from the burden of trial manufacture runs and gets better control of its inventory, we should see stock turns track up, in line with industry competitors. If Tesla is serious about its production goals, this figure will have to improve.

I, for one, am extremely excited to see if Tesla can end up teaching traditional industry a thing or two.