Apple (NASDAQ:AAPL) is going through a very particular phase. Revenue is moving in the wrong direction, and this is a big reason for concern among investors in the company. On the other hand, Apple stock looks remarkably cheap at current prices, and sales could start growing again in the middle term. Is now the right time to invest in Apple stock?

Growth tends to slow down as a company gains size over the years, and Apple is expected to generate nearly $215.5 billion in revenue for 2016. Once you reach such a gargantuan scale, finding new growth opportunities that are big enough to move the needle in terms of overall financial performance can be quite challenging.

The smartphone industry is decelerating on a global scale, and this is hurting Apple in the very important iPhone segment, which brings in nearly 57% of the company's sales. Besides, Apple enjoyed a massive sales boom from the iPhone 6 in 2015 -- most customers don't upgrade their smartphones every year, so this is making year-over-year comparisons particularly difficult in 2016.

In this context, Apple reported a 15% decline in revenue during the quarter ending in June -- the third quarter of fiscal year 2016 for the company. This decline in revenue was widely anticipated, in fact, sales outperformed both Wall Street forecasts and the company's own guidance during the quarter. Nevertheless, as long as sales continue declining, this will probably put considerable downward pressure on Apple stock.

The good news is that the company's problems are already incorporated into valuation to a good degree. Apple stock is currently trading at a price-to-earnings ratio around 12.5, a substantial discount versus a P/E ratio around 20 for the average company in the S&P 500 index. Offering a similar perspective, the price-to-cash-flow ratio is near 9.5 for Apple versus 12.5 for companies in the S&P 500.

The stock also looks quite cheap by historical standards. The following chart shows the evolution of three valuation ratios for Apple over the last decade: price to earnings, price to free cash flow, and enterprise value to EBITDA. An image is worth a thousand words, and the three valuation indicators are near the low end of their historical range. 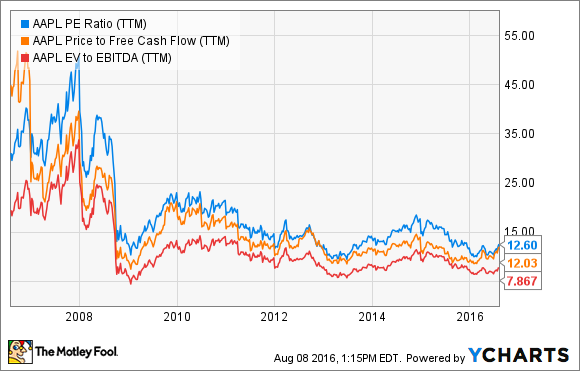 Why performance could improve in the midterm

The smartphone industry is maturing, so Apple can't be expected to deliver the same kind of performance it produced during the initial expansion phase. Nevertheless, this doesn't necessarily mean that sales will keep declining in the coming years.

The company introduced its new 4-inch iPhone SE in March, and demand for the product is outperforming management expectations. Demand for the iPhone SE exceeded supply last quarter, and Apple is increasing capacity to better meet consumer needs in the coming months. Increased capacity could provide a boost to iPhone SE sales as supply and demand get more in line over the midterm.

It's important to note that the iPhone SE is priced cheaper than previous iPhone models, and it's generating considerable traction among first-time iPhone buyers. Apple CEO Tim Cook said in the most recent earnings conference call that the percentage of iPhone SE sales going to new iPhone customers is higher than what the company has seen from previous iPhone models.

Apple has one of the most powerful brands in the world, and consumers are famously loyal to the company's ecosystem of products and services. iPhone users are quite likely to buy a new iPhone when renewing their smartphones, and they also tend to go for Apple products when buying a smartwatch, a tablet, or a computer. The fact that the iPhone SE is attracting lots of first-time buyers to the brand is certainly good news for investors in Apple.

The services division includes revenue from the iTunes Store, the App Store, Apple Pay, Apple Care, and other services. This segment produced almost $6 billion in sales last quarter, and it's now the company's second-biggest division behind the iPhone, accounting for nearly 14% of total revenue. Performance is truly booming in the services segment, with sales growing 19% year over year last quarter.

Apple's year-over-year sales comparison will be easier in 2017 than in 2016, the iPhone SE is attracting new customers to the platform, and the services division is looking like a strong driver going forward. Considering these factors, it doesn't sound like much of a stretch to expect improving revenue growth from Apple over the coming quarters.

Apple is a fundamentally solid business trading at attractive valuation levels. While future performance is hard to predict, there are strong reasons to believe that the worse may be over in terms of revenue growth, and the company has the potential to start growing again next year. With this in mind, Apple stock is currently looking like an attractive candidate for investors.