When it comes to bank stocks, most writers and analysts, myself included, tend to focus on the small sliver of banks at the top of the industry -- those with multitrillion-dollar balance sheets. By doing so, we ignore the thousands of regional and community banks that could also enrich investors.

I've therefore decided to dip my toes into the regional banking space, starting here with a brief overview of KeyCorp (NYSE:KEY), a $101 billion bank based in Cleveland, Ohio.

An overview of KeyCorp

It's important to note at the outset that I've understated KeyCorp's size. While the bank's latest quarterly filing with the Securities & Exchange Commission lists it at $101 billion, the reality is that it's already considerably larger than that.

Last October, KeyCorp announced a merger with First Niagara Financial Group, a $40 billion regional bank that operates in four states throughout the Northwest: New York, Pennsylvania, Connecticut, and Massachusetts. The merger was completed on Aug. 1, after the Federal Reserve gave its consent to the deal.

The combined institutions have more than 1,200 full-service branches spanning 15 states. And with a cumulative $136 billion in assets, KeyCorp is slated to be the nation's 15th largest commercial bank.

This heft allows KeyCorp to diversify its revenue streams -- that is, beyond the roughly half of its top line that comes from its portfolio of loans and securities. It offers trust and investment services, investment banking, and cards and payments products, among other things. This should allow KeyCorp to perform consistently, irrespective of the economic environment.

The Cleveland-based bank has something else going in its favor, as well. Many of the regulations passed in the wake of the financial crisis come down hard on KeyCorp's larger rivals -- JPMorgan Chase, Bank of America, Wells Fargo, and Citigroup. This gives regional banks an opportunity to exploit an uneven playing field.

Not only do these multitrillion-dollar banks have to hold more capital than regional banks, which weighs on their profitability, but they are also effectively barred from acquiring other banks. The latter restriction comes from a rule that limits a bank's share of nationwide deposits to 10%, which JPMorgan Chase, Bank of America, and Wells Fargo already surpass. Theoretically, this should make it easier for regional banks such as KeyCorp to grow.

The principal downside to KeyCorp is that it performed poorly during the financial crisis. You can get a sense for this by looking at the bank's stock performance over the past decade. As you can see in the chart below, its stock price has dropped by 67% since 2006. 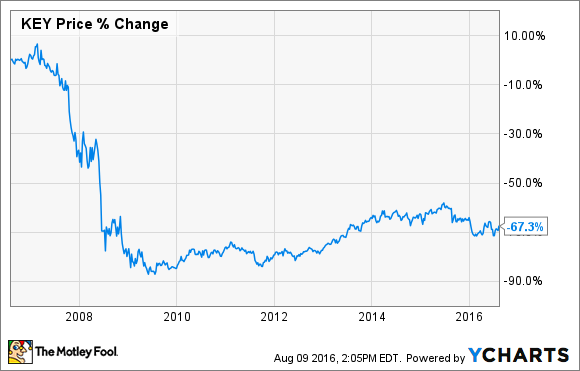 It's tempting to chalk this up to history and thus ignore it. Why should investors still hold KeyCorp's past performance against it today? On top of this, the bank has made major changes in its executive suite since the crisis. Its chief executive officer, Beth Mooney, was promoted to CEO in 2011. Its chief financial officer, Don Kimble, joined KeyCorp from Huntington Bancshares in 2013. And its chief risk officer, William Hartmann, came on board from Citigroup in 2010.

In the world of banking, however, a company's past performance shines a revealing light on its underlying culture, particularly in terms of how it approaches credit risk -- that is, determining how stringent its loan policy should be. This is why current and prospective investors should tread carefully when it comes to buying and holding KeyCorp's stock. Its relatively new executive team could very well transform the bank's culture, but doing so is an uphill battle.

It's worth noting, too, that the current economic environment is inhospitable to bank profits. While low interest rates pressure banks' top lines, higher regulatory and compliance costs chip away at the bottom line. You can see the impact of this on KeyCorp's profitability. In the second quarter, the bank reported a return on assets of 0.82%, which is well below the standard industry benchmark of 1%.

The net result is that KeyCorp's stock trades for a 7% discount to its book value, according to data from YCharts.com. That isn't a huge bargain when you consider that shares of Bank of America and Citigroup are priced at 37% below their respective book values. But a discount is still a discount.

In sum, KeyCorp is well positioned to generate future returns that outpace its larger rivals, thanks to the regulatory environment that discriminates against the biggest banks. But whether it can actually pull this off -- while also earning a decent absolute return -- remains to be seen.