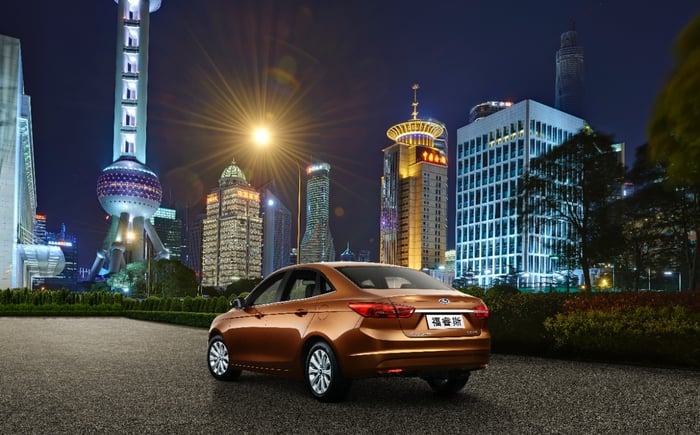 It's a great thing that Ford Motor Company (NYSE:F) generates massive profits right here in America. In fact, during the second quarter alone, Ford generated $2.7 billion in pre-tax profits in North America. However, it turns into a negative when a company is so reliant on one region for profits. During the second quarter, 90% of Ford's global pre-tax earnings came from North America.

Investors have long hoped that a surging Chinese auto market would push Ford's Asia-Pacific region to new heights and become a second pillar of revenue and earnings strength. That hasn't happened yet, but looking at July's sales figures, Detroit's second-largest automaker is still making progress.

It's been a rocky road for China's automotive market over the past 12 months. About a year ago, the economy faced a lot of uncertainty in general and that put pressure on auto sales. Then, the Chinese government stepped in and placed some tax incentives on new-vehicle purchases that helped revive the market since last October -- and, fortunately, the incentives will remain throughout 2016.

Looking specifically at Ford's July sales data in China, the company and its joint ventures posted a record July month with sales increasing 15% to just over 88,000 units. The bulk of that was generated by Changan Ford (CAF), which posted a 20% sales gain during July, compared to the prior year, to 69,074 units.

Ford's Escort had an excellent July with sales increasing a staggering 82% while the Focus also had a healthy 13% gain. For the full year, Ford and its joint ventures combined to sell nearly 653,000 units, which was a 6% gain over last year during the same time period. While the 6% gain appears less pronounced on the graph below, thanks to Ford switching from reporting wholesales to retail sales, you can see the tremendous progress over the past three years. 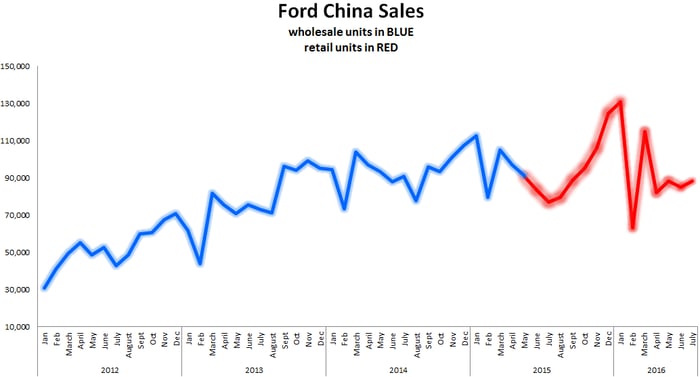 The landscape of China's automotive market is certainly changing. In the past, large tier 1 cities drove new-vehicle sales to new heights. But tier 1 cities, such as Beijing and Shanghai, are dealing with population and pollution problems, which are hindering vehicle sales. The growth has shifted to smaller tier 3 and tier 4 cities, which are now posting double-digit growth. Better yet, General Motors' China chief, Matt Tsien, noted that the company believes China is about a decade away from vehicle sales saturation.

For investors, Ford's continued success in China will be critical for the company to lessen its dependence on a plateauing North American market. To do that, though, Ford is going to have to focus on a handful of key areas going forward. Ford needs to continue launching its Lincoln luxury brand in China, expand its lower-cost offering, and adjust to booming tier 3 and tier 4 cities.

If Ford can accomplish those things over the next couple of years, it'll be one big step toward building that second pillar of revenue and earnings potential that investors have desired for years.