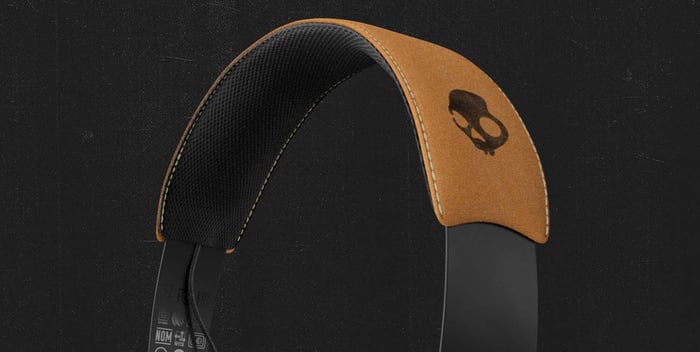 Headphone company Skullcandy (NASDAQ:SKUL) reported its second-quarter results after the market close on Aug. 9. The company agreed to be acquired by Incipio Group in June, a move that will allow Skullcandy to continue its turnaround efforts without the pressures of being publicly traded. The second quarter was lackluster for the company, with revenue declining and higher costs leading to losses. Here's what investors need to know.

What happened with Skullcandy this quarter?

Skullcandy didn't provide an outlook for the third quarter or the full year.

We are pleased with our second quarter results. The success we saw with our brands in a challenging retail environment is a testament to the consumer focus and passion of our team. For the Skullcandy brand, we saw significant strength in our largest domestic accounts led by our expanded wireless portfolio which helped fuel sell-through at a rate that exceeded the overall headphone market according to NPD. Wireless is the future of audio and the Skullcandy brand is winning. For the Astro Gaming brand, we continue to experience strong growth and expect the fall launch of the new A50 headset to set the standard for the best console gaming headset in the market. While our overall Company results were hampered by some temporary headwinds including the ongoing clean-up of our China region and several retailer bankruptcies around the world, we are excited as a team to be on full attack.

When Skullcandy's acquisition by Incipio was announced in June, Darling praised the move:

We are excited to be joining forces with Incipio Group as we believe it's in the best interests of Skullcandy and our shareholders. The combination of our two companies allows us to better serve our consumers and retailers with focused, best-in-class products in multiple categories. We share a common culture, vision and commitment to driving innovation and this merger will allow our two teams to amplify their efforts going forward. Also, importantly, we remain deeply committed to our teams, retail partners, ambassadors and community.

Skullcandy originally accepted an acquisition offer from Incipio for $5.75 per share, but a better offer from Mill Road Capital Management led Incipio to increase its offer to $6.10 per share. Skullcandy's board of directors is recommending that shareholders accept the new offer and tender their shares.

Skullcandy's acquisition comes at a time when the company is struggling with a variety of issues. While investors are getting a hefty 37% premium over the stock's closing price on June 22, the offer price is far lower than the $11 per share that Skullcandy stock traded for in early 2015. With a choice between continuing its turnaround efforts as a public company or combining with Incipio, Skullcandy is throwing in the towel and taking the deal.