The biopharma became the latest target in the ongoing healthcare M&A bonanza.

What: Shares of U.S.-based Relypsa ( RLYP ), a biopharma developing polymeric medicines for disorders of the gastrointestinal tract, gained more than 72% last month, according to data from S&P Global Market Intelligence. The drugmaker's monthly surge was triggered by a $1.53 billion all-cash buyout agreement with the Swiss-based Galenica Group. Upon closing in the third quarter of this year, Relypsa will become the the U.S. headquarters for Galencia's Vifor pharma business unit, whereby enabling a planned split of the company by 2017. 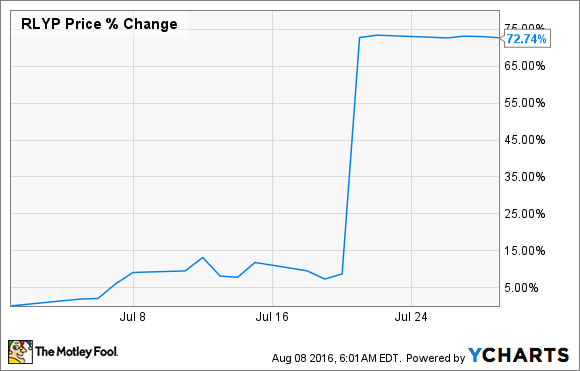 So what: The terms of this deal received a mixed reception among Relypsa's shareholder base. The apparent reason for the discontent is that the Street's high-end price target (before this deal was announced) implied that Relypsa's market cap could grow organically to around $2.43 billion, or around 59% higher than Galencia's tender offer, over just the next year.

The long and short of it is that some analysts thought that Relypsa's FDA-approved treatment for hyperkalemia, Veltassa, would have an easier time capturing an outsized portion of this projected $6 billion market following the rejection of AstraZenca's ( AZN -1.02% ) competing experimental drug ZS-9 last May.

Now what: As Astra's rival hyperkalemia medicine was rejected for manufacturing problems, and reportedly not for a lack of efficacy and/or safety concerns, there's a good chance that ZS-9 will reach the market within the next year at the latest.

Although it's impossible to tell whether this delay would provide Relypsa enough time to build a competitive moat strong enough to withstand the entrance of a drug backed by a major pharma like Astra, we do know that Veltassa's current growth rate -- without any major competition to speak of at the moment -- puts it on track to generate around about $200 million in revenue for the drugmaker by the end of 2018.

Viewed this way, this deal looks more than fair, especially with Astra's experimental drug still in the picture. The bottom line is that it's unlikely that this deal will get scuttled over concerns that management failed in its fiduciary duty to shareholders, meaning that investors probably shouldn't hold out hope that a higher bid is coming down the pike.

Shares Of Relypsa Inc. Are Surging Again -- Here's Why