GM has a significant presence in South America, including this assembly plant in Rosario, Argentina. But lately the General has posted big losses in the region. Image source: General Motors.

Like most of its rivals, General Motors (NYSE:GM) has struggled in South America over the last couple of years. Severe economic downturns in Brazil and Argentina hurt new-car sales across the industry, and profit margins have been squeezed as some competitors have turned to aggressive price-cutting to try to keep sales going.

For GM, the situation has led to a lot of red ink. It lost $622 million in South America in 2015. But recently, those losses have been narrowing: GM South America's $188 million loss in the first half of 2016 is a big improvement over the $358 million it lost in the year-ago period.

What has GM been doing to reduce its losses in this tough market?

GM is working to offset difficult conditions on several fronts

This slide from GM's second-quarter earnings presentation shows what helped and hurt in the second quarter versus its year-ago result. 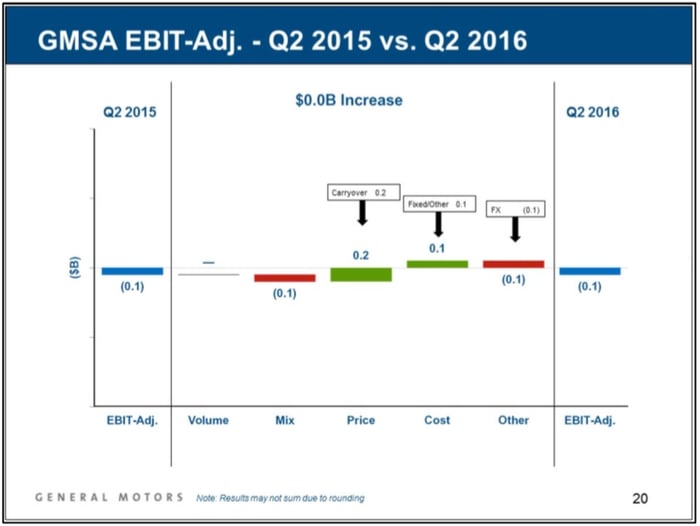 GM attributed the year-over-year sales drop to increasing economic difficulties in Ecuador, historically one of GM's more profitable markets in South America. That affected "mix" as sales of higher-profit vehicles fell relative to less profitable models. Unfavorable exchange-rate swings also hurt, as most of the region's currencies continued to lose strength against the U.S. dollar.

But as you can see in the slide, there were some positive forces at work as well. GM was able to raise its prices in some markets, notably Argentina and Colombia, to partially offset inflationary and foreign-exchange pressures, it said. GM executives also called out the local management team's continued success in controlling costs.

"We have a very strong core business franchise in South America," CEO Mary Barra said during GM's second-quarter earnings call. "I think [GM's management team in South America] has done a very good job over the last couple years of really looking at the market conditions and taking cost out."

She added, "Obviously, results are disappointing right now, with these macroeconomic conditions.  No one knows for sure how long they'll last, but they're lingering. But we're well positioned and we have seen improvement in the first half of this year from the first half of last year even in a more difficult macroeconomic environment."

The upshot: GM is in South America for the long haul

At some point, as the losses continue to pile up, it's worth asking if GM will pack up and leave South America, as it did in Russia a couple of years ago. After all, a hallmark of Barra's tenure has been a strong emphasis on profitable "capital deployment," making investments only in regions (or products or technologies) where GM expects a good return.

But Barra emphasized that GM is taking the long-term view in South America. "Over its history, South America has been a very important business for us and has delivered strong performance," she said during the earnings call. "We have a very strong product portfolio there and with a lot of model year refreshes that happened this year that are very, I'll say, economically done from a capital deployment perspective. We have a very strong distribution network. I think the strongest dealer body. It's a very important business for us and we know that it has huge potential as we move forward."

Long story short: GM is successfully minimizing its losses in South America as it rides out the economic storm. But it sees the region as a profitable market over the long term, and it's taking steps now to profit as the key South American markets recover.