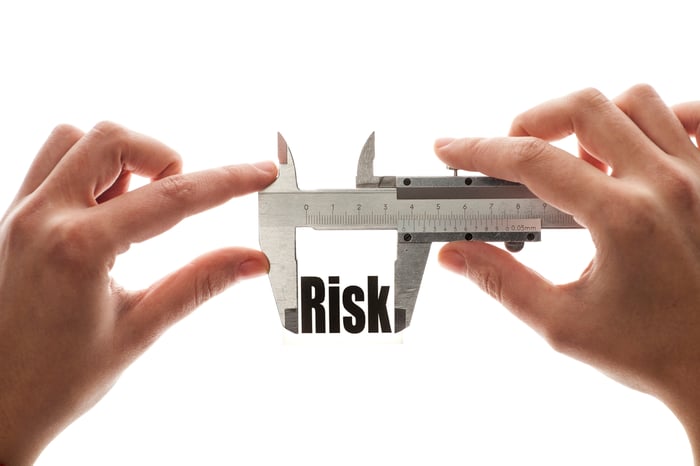 It's been a wild year for robotic-surgery stock TransEnterix, Inc. (NYSEMKT:ASXC). Last September the company spent a great deal acquiring the ALF-X System while waiting for the U.S. Food and Drug Administration to make a decision regarding its main project at the time, the SurgiBot System.

The purchase raised some eyebrows, but without it TransEnterix would have nothing to sell right now. In April, the FDA declared the SurgiBot not equivalent to existing devices and refused to grant it clearance.

The ALF-X earned EU marketing approval (known as the CE mark) long before TransEnterix bought it, and just ahead of reporting second-quarter earnings the company announced its first sale.

Does the sale signal a smooth path to profitability, or is Transenterix as risky as ever? Read on to find out.

The ALF-X earned EU marketing approval in 2011, but its previous owner, Italy's Sofar, never sold one. To be fair, Sofar mainly markets pharmaceutical products and dietary supplements, with a minor medical-device presence. There's a chance its launch failed because of a lack of effort on Sofar's part, but success under TransEnterix's ownership is hardly a sure thing.

There are reasons to suspect ramping up demand for ALF-X in the EU will be more difficult than expected. The company is up against firmly entrenched robotic-surgery pioneer Intuitive Surgical (NASDAQ:ISRG) and its Da Vinci line of devices that sell for around $1.5 million each, with newer models as much as $2.5 million. The ALF-X costs roughly $1.8 million but promises lower per-procedure costs than Da Vinci systems by allowing surgeons to reuse instruments. According to TransEnterix CEO Todd Pope, Intuitive Surgical has been peddling older, refurbished devices at steep discounts, diminishing ALF-X's ability to compete on price.

Whether hospitals aren't interested in the ALF-X or are simply being won over by Intuitive Surgical strategy isn't clear, but it's probably a combination of both. What we do know is that TransEnterix began its ALF-X selling efforts in the fourth quarter of 2015 but didn't announce the first "sale" until late last month. That might not be as bad as it sounds, as management expects hospitals to spend four to six quarters with the device on site before pulling the trigger, implying an unspecified trial period allowed prior to official purchase. That means it's still too early to issue ALF-X a European death certificate.

The device isn't cleared for marketing in the U.S., although the company intends to file an application for 501(k) clearance by the end of the year. If approved, U.S. sales could begin in 2017, but that clearance is far from guaranteed.

The most encouraging tidbit from the second-quarter earnings call was a steep increase in hospital interest. In the first quarter, management said surgeons representing 10 hospitals had participated in a hands-on demonstration. During the second quarter, surgeons from 21 hospitals gave the ALF-X a test drive. However, management didn't say how many of those demos resulted in hospital placements that could eventually lead to sales.

A far less encouraging figure to point to in the second quarter was an enormous writedown of about $61.8 million in goodwill associated with the SurgiBot system's implosion. Overall, TransEnterix reported a staggering loss of $82.4 million during the three months ended in June.

Goodwill impairment is a non-cash charge, allowing TransEnterix to exit the quarter with $64.6 million in cash and equivalents, which should be enough to see it through the third quarter of next year. Despite its decent cash position, though, I expect that more share dilution lies ahead for investors. Even if all 31 hospitals to test drive an ALF-X this year end up buying one, it wouldn't cover the amount of cash operations are expected to burn through over the next year or so with R&D teams on two continents. 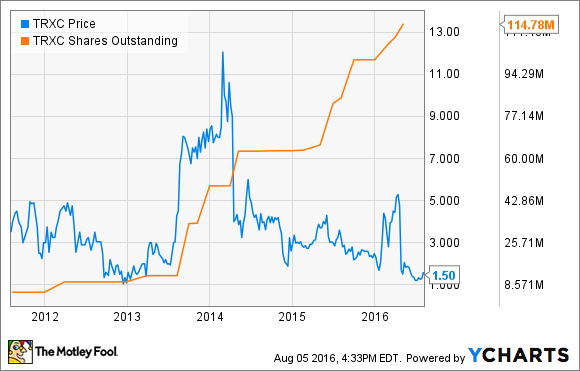 If the stock is hovering near its recent price of $1.50 around this time next year, investors can expect their slice of any potential profits to evaporate, again. Of course, there's a chance the FDA might clear the ALF-X before then, and positive European sales figures could come rolling in. That news would almost certainly drive up the stock price and limit the number of shares the company will need to sell to keep its doors open.

Considering TransEnterix's track record, though, I wouldn't recommend betting on such success to the most adventurous investors. It's far too risky.