What: ZIOPHARM Oncology (NASDAQ:ZIOP), a clinical-stage synthetic immuno-oncology company, lost over 18% of its value last month, according to data from S&P Global Market Intelligence. The biotech's shares plummeted on news that a patient died from a brain hemorrhage in an ongoing early stage trial evaluating a gene therapy, Ad-RTS-hIL-12, in a particularly aggressive form of brain cancer known as glioblastoma. 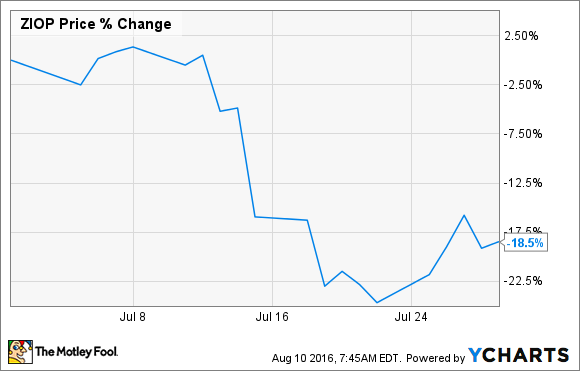 So what: Although ZIOPHARM, along with the study's safety review committee, were able to quickly determine that the death was unrelated to the experimental therapy, the damage to the biotech's valuation was already done. Simply put, this clinical setback seemed to serve as a stark reminder that numerous experimental drugs and cell-based therapies in the past have shown little to no ability to halt  -- or even significantly delay -- this devastating disease.

Now what: Despite this recent speed bump in the clinic, ZIOPHARM's management remains upbeat about the company's emerging immuno-oncology pipeline, and its collaboration with Intrexon (NASDAQ:PGEN)in oncology and graft-versus-host disease (GvHD). The good news is that the biotech expects to have six clinical trials under way for its various immuno-oncology candidates by the end of 2016.

ZIOPHARM also recently amended its agreement with Intrexon to reduce the payable operating profit rates from 50% to 20% for any commercial products that stem from this collaboration -- except those being co-developed with Merck KGaA. To do so, however, ZIOPHARM had to issue $120 million in new preferred shares to Intrexon that pay a 1% monthly dividend.

Looking ahead, this small-cap biotech appears to be at least two years away from even having the opportunity to file a regulatory application -- yet its current cash runway only extends to the end of 2017. So, given the company's clear need to raise additional funds to advance its clinical activities, investors are probably best served by holding off on buying shares right now. After all, it's always an uphill battle when it comes to bringing an experimental cancer treatment to market, and ZIOPHARM's clinical platform is far from a proven commodity.