Shares of TASER International (NASDAQ:AXON) have been on a hot streak in 2016, gaining nearly 70% year-to-date as a growning number of law enforcement agencies around the world implement the use of less-than-lethal weapons and body cameras. And given the momentum the company is enjoying, this may be just the beginning.

That said, it's actually not traditional body cameras that are driving investor enthusiasm -- here's the lesser-known product that's behind TASER International's gains this year. 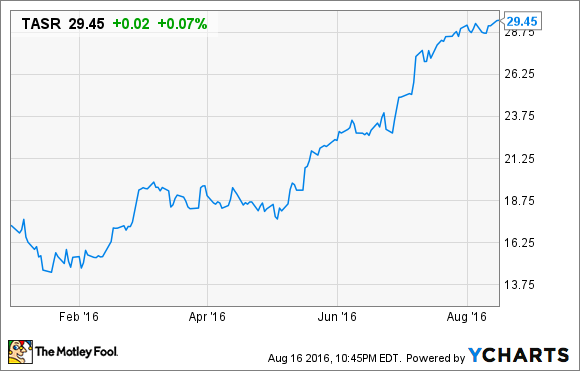 Two products get most of the attention for TASER International: Tasers and body cameras, which are both very important to the company. But the most impressive product of 2016 has been Evidence.com, TASER's cloud-based video management system that stores and organizes footage captured by wearers of the company's Axon body cameras. The impact of Evidence.com isn't seen immediately but over the course of a contract's lifetime, usually three to five years, and it can have a big impact on the bottom line.

Below, the effect is laid out in financial terms. In the first row, you can see bookings for Axon body cameras and Evidence.com are growing rapidly, but the Evidence.com bookings stack on top of each other through future contracted revenue. That's the real reason to be excited about the service.

Booking customers is great for TASER International, and the bottom line is really going to start growing as Evidence.com revenue starts to come in over the next few years.

Where the real money is

This is why the growth in bookings and future contracted revenue is so important -- it effectively locks in that elevated margin for years to come.

What's next from Evidence.com?

Already a hit with customers, the runway for Evidence.com is just beginning. TASER International recently partnered with Cradlepoint, which could bring wireless data transfer and even live feeds to law enforcement body cameras in the future.

With the existing contracts and high growth potential, Evidence.com is clearly TASER International's top product in 2016. Before long, it will likely be the biggest moneymaker, too.