Cisco Systems (NASDAQ:CSCO) is best-known for providing the IT hardware (switches and routers) that drive the internet, but investors may need to rethink that view in the future. The company's fourth-quarter results, which were reported Aug. 17, reveal a company generating growth from its non-core product offerings while continuing its transition toward more software and subscription revenue. Let's take a look at trends investors should watch.

Clearly, Cisco reported a good quarter, but the guidance for the first quarter of FY 2017 predicts a slowing of revenue growth and decline in gross margin:

When pushed on why guidance looks weak, CEO Chuck Robbins discussed two issues in the conference call. He talked about uncertainty about how emerging-market and service provider demand -- both negative in the fourth quarter -- would play out in the first quarter. Service providers typically generate around half of routing revenue, so it was no surprise to see routing revenue down 5.8% in the quarter compared to the same period last year.

More positively, Robbins said the guidance decline was part of the company's transition to a software and subscription business as revenue is recognized over time rather than initially, as with product sales.

Restructuring and core vs. non-core growth 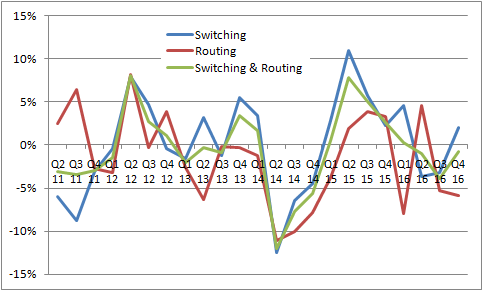 Meanwhile, a breakout of revenue growth in the most recent quarter shows how non-core areas like wireless, collaboration, and security generated good growth. In addition, Cisco continued its good run with services growth. It came in at 5% following a normalized growth rate of 4% in the third quarter, and 3% and 1% in the previous quarters. 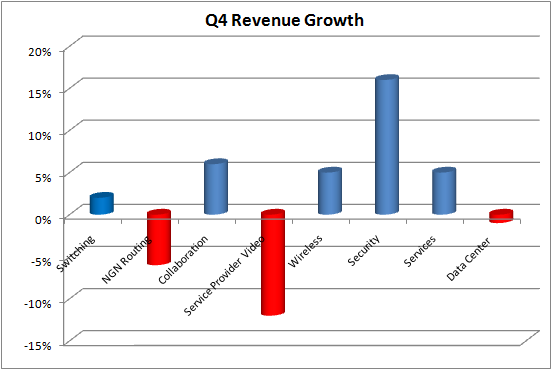 The principle of slowing core growth relative to non-core growth was further highlighted by substantive restructuring measures announced in the earnings release and conference call. Robbins said on the call: "Today we announced a restructuring, enabling us to optimize our cost base in lower growth areas of our portfolio, and further invest in key priority areas, such as security, IoT, collaboration, next-generation data center, and cloud."

The restructuring will eliminate up to 5,500 positions, representing 7% of the company's global workforce, and CFO Kelly Kramer said the restructuring would create up to $700 million in pre-tax charges with $325 million to $400 million expected in the first quarter.

Another important part of the transition to a software and subscription business model is something called deferred revenue. It's an important metric to follow because as a company shifts from hardware sales toward subscription-based sales, it typical suffers a loss of upfront revenue in favor of longer-term subscription revenue. The latter is recognized over time; meanwhile it sits on the balance sheet as deferred revenue.

As you can see below, Cisco's deferred revenue increased in the fourth quarter after sequentially flat-lining in previous quarters -- a good sign. 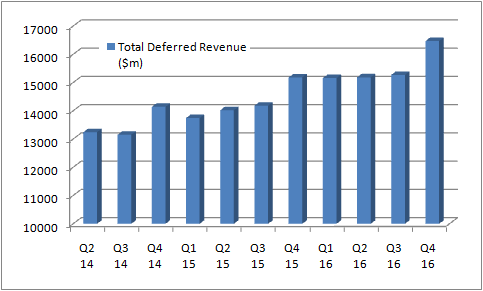