It's hard to find a technology stock with a dividend more generous than Seagate's (NASDAQ:STX). The maker of traditional hard-drives currently pays its investors around $0.63 per quarter per share. Trading near $32, Seagate yields almost 8%. Dividend payouts vary from company to company and from industry to industry, but by nearly any standard, Seagate's yield is unusually high. It may seem attractive, but would-be investors should approach with caution.

If the market was confident in the sustainability of Seagate's dividend, investors would likely buy the stock en masse, pushing its yield down to a more pedestrian 3% to 5% (chief rival Western Digital, for example, yields just over 4%). The fact that Seagate's yield is so high suggests many investors view the company skeptically, anticipating a reduction in its payout at some point in the near future.

However, if Seagate can sustain its dividend, it could reward investors with a steady stream of sizable payments. Let's take a closer look at the prospects for Seagate's dividend.

A little high, but manageable

From the beginning of 2012 to the end of 2014, Seagate's dividend yield remained consistent at around 3%. But early in 2015, Seagate's business began to deteriorate. Over the last 18 months, Seagate's share price has crumbled, and its dividend yield has surged. On two of the company's recent earnings calls, management was asked explicitly about the possibility of a dividend reduction. 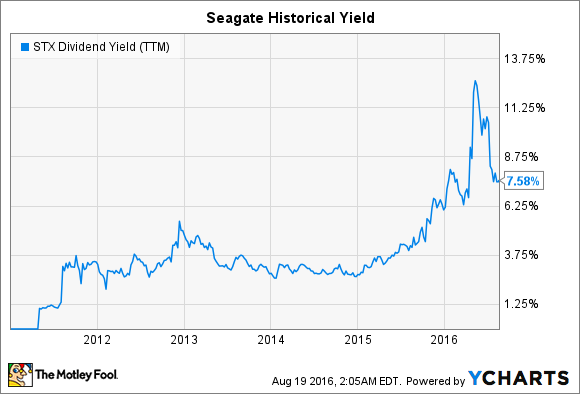 During the company's January earnings call, CEO Steve Luczo expressed complete confidence in the dividend going forward. "Our cash flow relative to our dividend payment is not a concern for us at all," he said.

But in April, Seagate turned in a disastrous third-quarter report. Unsurprisingly, Luczo's subsequent remarks were far more tempered. "We would certainly like to keep the dividend level where it is," he said. "[But] obviously, these...pay-out ratios [are high]."

CFO Dave Mosley remarked that Seagate's dividend was "manageable" but was careful to note that the company's board of directors would make the final determination. "We think [the dividend] is well manageable, albeit at the higher end of those levels of a pay-out ratio, and obviously up to the board of directors," he said.

In each of its last three quarters, Seagate paid out $188 million worth of dividends. Operating cash flow, however, has varied, and has been trending down. In the second quarter, Seagate generated $382 million of operating cash flow. That fell to $205 million in the third quarter, and $269 million last quarter. In other words, Seagate has spent almost two-thirds of its operating cash flow on dividend payments since the beginning of the year.

Looking at net income, the comparison is even worse. Seagate has recorded a total net income of $301 million in 2016. On a trailing 12-month basis, Seagate's payout ratio is an astounding 293.1%. A year ago, Seagate had $2.5 billion of cash on its balance sheet -- that fell to just $1.13 billion at the end of last quarter.

Seagate's management undertook a number of cost-cutting initiatives this summer aimed at reducing its expenses. "Overall restructuring activities are proceeding as planned, and we expect the financial benefit of these actions will begin to have a positive impact [next quarter]," Morton said on the company's August earnings call.

But over the last four quarters, the drop in Seagate's business has been swift, and for shareholders, alarming. In its fiscal year 2015, Seagate generated $2.65 billion of cash from its operations; that dropped to just $1.68 billion in 2016. At the same time, annual sales fell from $13.74 billion to $11.16 billion.

Seagate's business remains tied to the market for traditional PCs, and its core hard-drives are under pressure from increasingly affordable flash-based storage. If Seagate's business continues to deteriorate, a sizable dividend cut seems likely.