AbbVie, Johnson & Johnson, and Pfizer have some impressive dividends. Find out which is best.

After taking it on the chin to begin the year, Big Pharma stocks have staged a comeback. The iShares U.S. Pharmaceuticals ETF had given up almost 20% near the beginning of 2016 but is now just down just a few percentage points for the year. This has driven down yields of most dividend-paying pharma stocks, but Pfizer (PFE -0.43%) and AbbVie (ABBV -0.78%) still offer more than 3% at recent prices.

Those higher yields come with higher risk of stalling growth, an issue that Johnson & Johnson (JNJ 0.92%) investors might have less to worry about. Let's look closer at these three companies to see which is the best dividend stock in Big Pharma.

Ghosts of dividends past

Past performance isn't a forward-looking guarantee, but it's one of the best indicators at our disposal. At 54 years, Johnson & Johnson has the longest streak of annual dividend increases, but in a sense AbbVie isn't far behind. AbbVie's parent company, Abbott, has 44 consecutive years of increased payments under its belt. Since its spinoff in 2013, AbbVie has increased its quarterly payout four times from $0.40 to $0.57 per share. 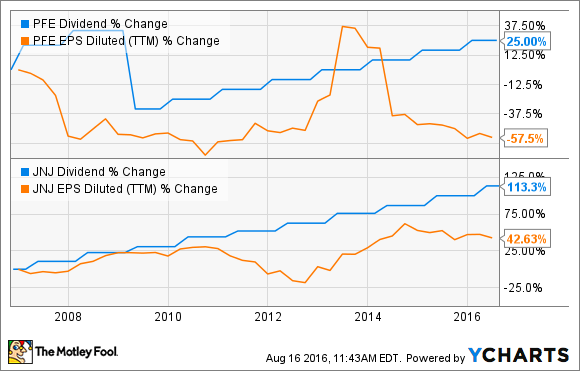 Pfizer is the clear loser here. In 2009, the company cut its dividend in half to clear a path for its enormous Wyeth acquisition. Over the past decade, its investors have seen payouts rise just 25%, accompanied by a dissapointing 57.5% decline in earnings per share. Over the same period, J&J's earnings per share rose 42.6% along with a 113% increase in dividend payments.

Turning toward sustainability, based on the familiar payout ratio metric (the percentage of earnings required to make dividend payments), Pfizer appears to be in trouble, with payments at 92.58% of trailing earnings. 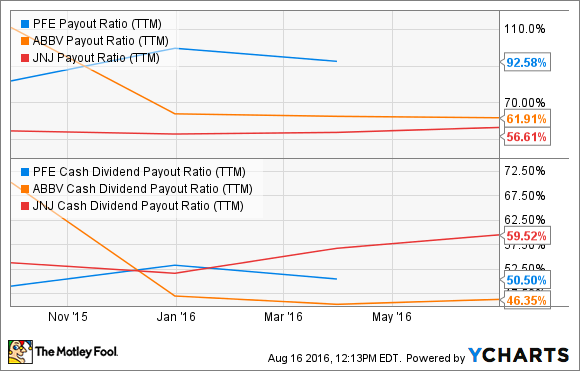 Reported earnings are subject to numerous non-cash charges, however, and savvy dividend investors also take into account the cash dividend payout ratio, measured as the percentage of free cash flow (minus dividend payments to preferred shares) required to make payments to common shares. Based on this sustainability measurement, all three distributions appear adequately funded based on trailing cash flows.

What could drive growth

Of course, to keep raising payments, these Big Pharmas need to grow their bottom lines. Worldwide spending on cancer medicines reached $107 billion last year and is expected to pass the $150 billion mark by 2020. AbbVie bought its way into this field with a $21 billion acquisition of Pharmacyclics and its rights to half of blood cancer drug Imbruvica's sales. Johnson & Johnson owns the other half but risked only $150 million up front in its 2011 deal with Imbruvica's discoverer.

In the second quarter, J&J recorded $295 million in Imbruvica sales, representing a 91.6% increase over the previous-year period, and a 13% increase over the previous quarter. The acceleration is partly due to a recent label expansion that made Imbruvica capsules the first chemotherapy-free option for newly diagnosed patients with the most common form of leukemia. The drug is expected to add more than $5 billion annually to each company's top line at its peak.

Pfizer's oncology program is also making strides, but in a much larger indication. A woman born in the U.S. today has about a 1-in-8 chance of eventually receiving a breast cancer diagnosis, and many will receive Pfizer's Ibrance. The capsules first earned FDA approval last February as a part of a first-line combination therapy for postmenopausal women newly diagnosed with a difficult-to-treat form of the disease. This February, the regulator expanded its label to include all women with the same form of the disease that progressed following a hormonal therapy.

The first approval alone made Ibrance a smash hit, and the more recent expansion is fueling the fire. Second-quarter sales of Ibrance suggest an annual run rate above $2 billion, as it races toward peak annual sales estimates of $5 billion.

When it comes to intellectual-property rights, drug patents are incredibly short lived. Pharmas must discover or acquire new products constantly as old ones lose their source of pricing power.

This will become a huge problem for AbbVie, but exactly when is unclear. Sales of AbbVie's Humira in the first half of this year suggest an annual run rate of $15.45 billion, an increase of 16% over the previous year period. Its continued success is remarkable, but the anti-inflammatory accounted for 62.3% of the company's total revenue in the first half. About 64% of Humira sales, and practically all its recent growth, comes from the U.S., where its composition-of-matter patent (the bulletproof one) is set to expire in December. That might allow competitor Amgen to market its biosimilar version of Humira as soon as next year. However, AbbVie has more than 70 additional patents for Humira that could keep competitors out until 2022.

Turning to Pfizer, one of its largest revenue streams, the Prevnar vaccine, isn't in danger of losing patent protection until 2026, but second-quarter sales of $1.26 billion were 16.3% lower than the previous-year period. The company blames the decline on the fact that a high percentage of over-65 adults are already vaccinated.

Pfizer's first largest revenue stream is pain reliever Lyrica, but this probably won't be the case for much longer. Since losing EU exclusivity in 2014, its sales in the region have plummeted, and its main U.S. patent should expire in 2018. Second-quarter Lyrica sales of $1.26 billion increased 3% over the previous-year period, but $1.05 billion came from regions where it maintains exclusivity. At about 9.6% of total revenue, Lyrica won't be as significant in terms of impending losses to Pfizer as Humira will be to AbbVie, but this and other patent expirations will create serious headwinds in the coming years.

Johnson & Johnson also faces loss of exclusivity for a key product, Remicade. Biosimilar competition from partners Celltrion and Pfizer is already eating into Remicade sales outside the U.S. and could begin at home as early as October.

The $1.78 billion J&J recorded in second-quarter Remicade sales comprised about 20.6% of the pharmaceutical segment's sales but just 9.6% of the healthcare conglomerate's total revenue for the period. Its consumer-goods and medical-device segments provide a great deal of insulation from drug patent expirations. Johnson & Johnson can boast 32 consecutive years of adjusted earnings growth, and diversification is largely responsible for its consistency.

With a yield of about 2.6%, J&J isn't that far behind AbbVie and Pfizer, which are both offering 3.4% at recent prices. Given the stronger headwinds its smaller peers face, J&J's payments will probably outpace both drugmakers in the long run, making it the best dividend stock in Big Pharma.

Cory Renauer owns shares of Johnson and Johnson. You can follow Cory on Twitter, @TMFang4apples, or connect with him on LinkedIn for more healthcare industry insight.