Gunmaker Smith & Wesson (NASDAQ:SWBI) has rallied more than 70% over the past 12 months, as concerns about tighter gun control laws sparked higher firearm sales. The number of NICS background checks for firearm purchases has risen annually for 15 straight months, and year-to-date checks through July have already hit 16.03 million -- indicating that total checks for 2016 should surpass the 21.14 million checks in 2015.

But controversies aside, it's hard for investors to ignore Smith & Wesson's long-term growth. Between fiscal 2011 and 2016, the gunmaker's annual revenue more than doubled. Will that growth continue, or will Smith & Wesson be derailed by the incoming headwinds in the gun market?

How fast is Smith & Wesson growing?

The disparity between Smith & Wesson and Sturm Ruger's growth can be attributed to the former's heavier exposure to assault rifles. Assault rifle sales have risen rapidly in response to proposed assault rifle bans, but if the government clamps down on those sales (more likely under a Clinton presidency), Smith & Wesson will lose more sales than Ruger.

Margins at both companies expanded, thanks to robust sales growth, boosting both companies' bottom lines. Smith & Wesson's net earnings from continuing operations -- boosted by its higher-margin accessories business -- rose 87% to $1.68 per share last year. The company expects its earnings to rise just 2% to 8% this year, while analysts forecast 4% growth. Ruger's net earnings rose 65% last year to $3.21 per share, but there aren't any Street estimates for its full-year earnings this year. 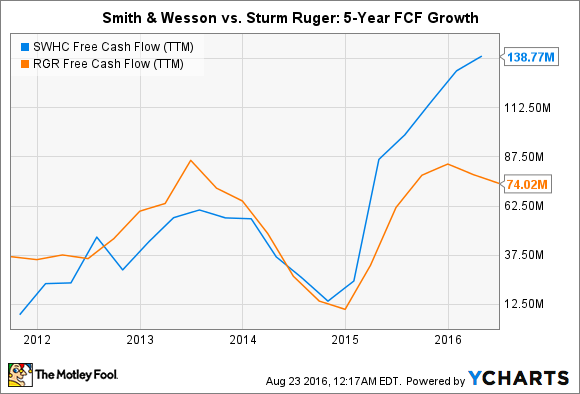 Smith & Wesson currently trades at 17 times earnings, which is lower than the industry average of 19 but higher than Ruger's P/E of 16. Analysts currently expect Smith & Wesson to grow its earnings 15% annually over the next five years, which gives it a 5-year PEG ratio of 1. Since a PEG ratio below 1 is considered undervalued, Smith & Wesson looks fairly valued compared to its earnings growth potential.

The numbers aren't risky, but the political implications are

On paper, Smith & Wesson looks like a sound investment with solid fundamentals. However, investors should remember that gun sales are cyclical, and are largely boosted by shootings and threats of government intervention.

Working with the government can also backfire. Back in 2000, Smith & Wesson signed an agreement with the Clinton Administration to enforce safety and design standards, restrictions on magazine sizes, and limits on firearm sales. The NRA responded by calling for a boycott of Smith & Wesson guns, causing its annual sales to plummet 37% between 2000 and 2001. These headwinds make both stocks more volatile than their fundamentals suggest.

Therefore, I believe that Smith & Wesson is a risky long-term investment, since new gun control laws -- which could be passed if the Democrats win the presidency and a majority in either house -- would either trigger frenzied buying or throttle sales. Those cyclical peaks and troughs would make year-over-year comparisons difficult, confusing, and ultimately undermine investor confidence in the company as a long-term investment.