George Budwell and Cory Renauer
(TMFGBudwell)
Author Bio
George Budwell has been writing about healthcare and biotechnology companies at the Motley Fool since 2013. His primary interests are novel small molecule drugs, next generation vaccines, and cell therapies.
Follow @BudwellGeorge

The declining sales of Gilead Sciences' (NASDAQ:GILD) groundbreaking hepatitis C medicine Harvoni have turned this once high-flying biotech into a battleground stock. And so far, the bears are winning in a landslide, with Gilead shedding a quarter of its value since the start of 2016.

That makes now a good time to consider whether shares are worth buying on the dip. So we asked two of our regular healthcare contributors why investors may want to buy -- or avoid -- this blue-chip biotech stock right now. Here's what they had to say.

A game-changing acquisition can happen at any time now

George Budwell: There's no doubt at this point that Gilead's hepatitis C franchise has peaked from a commercial standpoint. And given that Gilead's most promising clinical assets in oncology and non-hepatitis-C-based liver diseases are a few years away from reaching the market, the biotech may have to abandon its practice of acquiring developmental-stage companies in favor of buying a larger revenue-generating peer.

The good news is that conditions seem nearly perfect for Gilead to sally forth with a mid- to large-sized acquisition soon. After all, biotech valuations across the board have fallen dramatically this year due to the political rhetoric surrounding drug prices in the United States.

The iShares Nasdaq Biotechnology ETF (NASDAQ:IBB) has followed in Gilead's footsteps by falling by more than 14% year to date. While some of the biotech ETF's struggles owe directly to Gilead's plight -- as Gilead is one of its top holdings -- the fact remains that valuations have come down in a big way, perhaps making it an ideal time for cash-rich companies to go shopping.

And Gilead is certainly cash-rich. By the end of the third quarter, Gilead should have nearly $30 billion in cash, cash equivalents, and marketable securities to pursue an acquisition. And despite the many mergers and acquisitions over the last couple of years, the biopharma landscape remains a target-rich environment.

All told, Gilead has an obvious need for new sources of revenue. It has the cash to pursue a large acquisition, and there are several companies that would dovetail nicely with the biotech's historical strengths in infectious diseases -- or its newfound interest in oncology. That's why I'm cautiously optimistic that Gilead is finally nearing a bottom and could rebound quickly following a deal that brings new growth products into the fold.

Look out for the taxman

Cory Renauer: I'm a Gilead Sciences shareholder, but I might not have been so quick to scoop up my ultra-cheap shares if I had known of the allegations that it's been dodging billions in U.S. taxes. A recent report from a Washington D.C.-based advocacy organization suggests that, by moving the economic rights to a key U.S. patent for its hepatitis C virus treatment Sovaldi to an Ireland-based subsidiary, it ultimately avoided paying $9.7 billion in taxes last year.

During a conference call in early 2013, Gilead CFO Robin Washington fielded an analyst's question about the patent's domicile and its effect on future taxes. Washington said it was domiciled in Ireland, which would lower the company's tax rate over time. 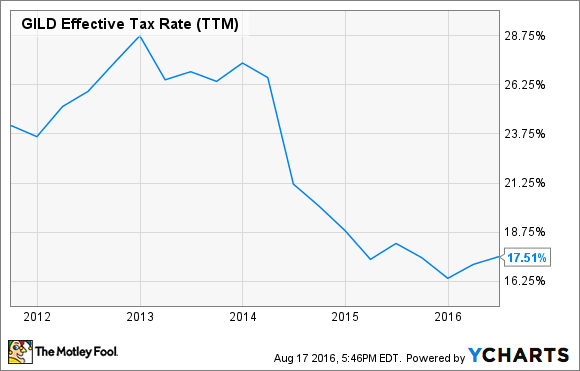 Last year, Gilead Sciences said $13.7 billion of its $21.7 billion in total pre-tax profits came from outside the United States, and that money is piling up. At the end of 2015, it had $28.5 billion in unremitted foreign earnings indefinitely reinvested in foreign subsidiaries. Repatriating those profits would cost the company about $9.7 billion in U.S. taxes.

That's a bill I would never expect to be paid, but now I'm not so sure. Recently, the IRS sent Facebook a notice of deficiency for $3 billion to $5 billion related to its transfer of operations to Ireland. I have my fingers crossed in hopes that Gilead doesn't receive a similar notice.

Why You Should (and Shouldn't) Buy Gilead Sciences, Inc. @themotleyfool #stocks $GILD $IBB Next Article
Current